Unsafe at Any Speed

Who is responsible for the series of oil train derailments and accidents that have occurred recently? A little more than one year since a train derailed in the Quebec town of Lac-Megantic, killing 47 people and destroying more than 40 buildings, this seemingly simple question remains at the heart of efforts to improve oil by rail safety. On Wednesday the Obama administration issued proposed changes to an industry that has, until now, operated with little oversight. The “Proposed Rulemaking” would gradually phase out the DOT 111 rail car, widely acknowledge as inadequate for the transport of highly flammable materials like Bakken crude; reduce “high-hazard flammable train” speeds to 40 mph; and require increased testing and sampling of mined gases and liquids. “Today’s proposal represents our most significant progress yet in developing and enforcing new rules to ensure that all flammable liquids, including Bakken crude and ethanol, are transported safely,” Transportation Secretary Anthony Foxx said in a press release. 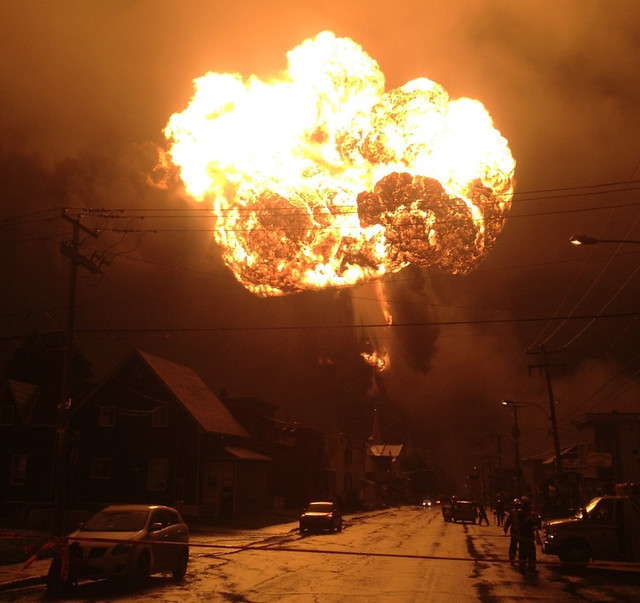 The new rules were issued along with the Pipeline and Hazardous Materials Safety Administration’s long awaited analysis of Bakken crude oil, known as Operation Classification. According to a Department of Transportation press release, “The data show that crude oil from the Bakken region in North Dakota tends to be more volatile and flammable than other crude oils.” Though the DOT’s proposed regulations address the risks posed by the transport of shale oil and gas, they don’t go nearly far enough, according to several environmental organizations. Earthjustice, ForestEthics, and the Sierra Club recently filed a legal petition asking the Department of Transportation to issue an emergency ban on the use of DOT 111 rail cars to ship Bakken crude.

“These are the heaviest, most dangerous trains on American tracks and they now pass through nearly every downtown in North America,” ForestEthics said in a press release. “The worst of these oil tanker cars are unsafe at any speed — they should be banned immediately, not years down the line.”

Yet as Larry Mann, a rail safety lawyer who also serves on the FRA’s Rail Safety Advisory Committee told me earlier this year, there are more than 200,000 DOT 111s on the rails. “It’s going to be quite a while before these cars are weeded out,” he said.

In other words, short of banning DOT 111s altogether, Bakken crude will continue to be shipped in tank cars that are highly vulnerable to being punctured in the event of an accident or derailment. In addition, it is unlikely that reducing train speeds and increasing the sampling and analysis of oil and gas will make much of a safety improvement. The trains that derailed in Alabama, Philadelphia and Virginia were going under the speed limit. According to the accident report filed by CSX for the train that derailed near Philadelphia in January, the train was traveling through a “10 mph temporary speed restriction when the train experienced an undesired emergency.” The Genesee & Wyoming train carrying at least 2.7 million gallons of Bakken crude that derailed in Alabama last November was traveling at 39 mph. And the train that derailed in downtown Lynchburg, VA in late April was traveling well below the 40 mph speed limit.

It is now widely accepted that Bakken crude poses a far greater risk in the event of an accident than conventional crude oil, as Earth Island Journal reported earlier this summer. Independent analyses by the Wall Street Journal, PHMSA, and Canada’s Transportation Safety Board all conclude that Bakken crude has an exceptionally low flashpoint and high vapor pressure. Of course, Bakken crude is not the only concern. Oil and gas from other shale formations is also being shipped by rail, so knowing their characteristics is crucial.

As long as oil and gas is crisscrossing the country in such unprecedented volumes, there is a highly likelihood of future accidents. Failing to address the inadequacy of the DOT 111 is a bit like a carmaker allowing defective automobiles to be sold off the lot.

“The public demands that the federal government crack down on automakers where there is a serious safety risk,” Earthjustice attorney Patti Goldman said in a written statement. “We should do the same for the oil industry.”

Which brings us back to the question of responsibility.

In the case of Lac-Megantic, all parties involved in the shipping of Bakken crude — from the oil brokers to the railway companies —have contested an order that they help pay the cleanup costs, which are now estimated at more than $200 million. A class action lawsuit filed by more than 1,550 residents is making its way through the courts.

Meanwhile, about a million barrels of crude is being pumped from the Bakken formation everyday. More than 60 percent of that is shipped by rail. The only way to ensure that an accident like the one that occurred in Lac-Megantic doesn’t happen again is to require oil companies to treat Bakken crude like other hazardous materials such as propane or chlorine. Or to properly stabilize the oil after it’s pumped out of the ground. But this would mean significantly increasing the cost of shipping oil by rail or even a temporary halt to production in North Dakota. For green groups this poses a quandary of its own: Should they advocate for improved safety measures or a ban on production and shipping altogether?

The DOT seems to acknowledge the risk of continuing to allow Bakken crude to be shipped in DOT 111s even if only for the next few years. “The safety risk presented by transporting Bakken crude oil by rail is magnified both by an increasing volume of Bakken being shipped throughout the US and the large distances over which the product is shipped,” the agency explained in its press release. In other words, the pace of production in North Dakota is simply overwhelming. Dealing with it properly and ensuring public safety would require taking a much harder line with the oil industry. Judging from this week’s announcement it is clear that the DOT and Obama administration have no intention of doing so.