Environmentalists, indigenous activists vow to 'resist with all of their power’
Zoe Loftus-Farren

President Donald Trump signed executive orders this morning paving the way for both the Dakota Access and Keystone XL pipeline projects to move forward. Both projects have been fiercely opposed by indigenous and environmental activists, who have so far been successful in stalling them — Keystone XL was cancelled by Obama in January 2015, and the Dakota Access pipeline has been on hold since December 4, 2016, when the Army Corps of Engineers denied it a permit to drill under the Missouri River in Cannonball, North Dakota. 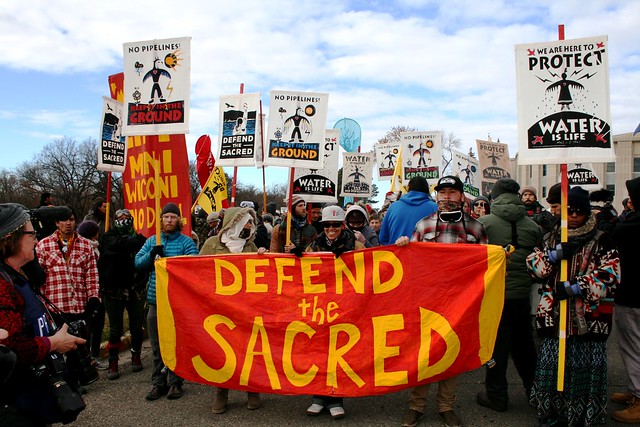 Photo by Leslie Peterson/FlickrThe Standing Rock Sioux have been organizing against the Dakota Access pipeline for months. The executive orders challenge their hard-fought wins against the project.

The DAPL order will have immediate implications in North Dakota, where the Standing Rock Sioux tribe, along with native and non-native allies, has been protesting the completion of the 1,172-mile Dakota Access pipeline. Energy Transfer Partners, the company behind the project, has been waiting to complete the final 1,100-foot piece of the pipeline, which threatens both clean water resources and Native American sacred sites in the region. (Trump is known to have had investments in Energy Transfer Partners. His team says he has divested from the company, but has not offered evidence of that.)

According to the Washington Post, the Keystone XL pipeline order reverses President Obama’s 2015 decision to reject the pipeline based on its climate impact and his determination that it wouldn’t help the economy or increase energy security in the US. TransCanada, the company heading the massive pipeline project, is expected to use eminent domain to seize property for its completion.

The executive orders are clear setbacks for the environmental movement, which had gained momentum during the Obama administration. “Donald Trump has been in office for four days, and he’s already proving to be the dangerous threat to our climate we feared he would be,” Michael Brune, executive director of the Sierra Club, said in a statement.

But advocates aren’t giving up.

“[T]hese pipelines are far from being in the clear,” Brune added. “The millions of Americans and hundreds of tribes that stood up to block them in the first place will not be silenced, and will continue fighting these dirty and dangerous projects.”

Annie Leonard, executive director of Greenpeace, echoed this sentiment: “A powerful alliance of indigenous communities, ranchers, farmers, and climate activists stopped the Keystone and Dakota Access pipelines the first time around, and the same alliances will come together to stop them again if Trump tries to raise them from the dead.”

The Standing Rock Sioux also vowed to fight the order. “President Turmp is legally required to honor our treaty rights and provide a fair and reasonable pipeline process,” Dave Archambault II, chairman of the tribe, said in a statement, adding that the executive order puts the tribe’s water supply at risk. “Creating a second Flint does not make America great again.”

Leonard pushed back. “Instead of pushing bogus claims about the potential of pipelines to create jobs, Trump should focus his efforts on the clean energy sector where America’s future lives,” she said. “Trump’s energy plan is more of the same — full of giveaways to his fossil fuel cronies at a time when renewable energy is surging ahead.”

“We will resist this with all of our power and we will continue to build the future the world wants to see,” she added.