With public protests on the rise, Ontario and Quebec to work together to ensure climate change is addressed before project is approved
Ron Johnson

Although most of the news involving oil pipelines in Canada is focused on the recent protests and arrests in British Columbia, and the ongoing battle over the Keystone XL pipeline, there is a growing movement in Eastern Canada centered on the province of Quebec opposing another massive project — the Energy East Pipeline. 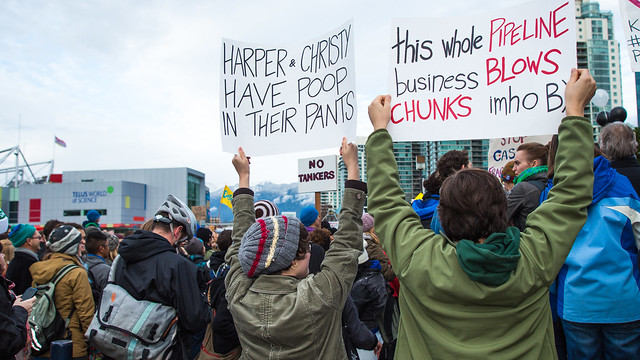 Photo by Mark KlotzCanadia is witnessing increasing public opposition to tar sands oil extraction and transport from the Athabasca Basin.The Energy East pipeline is seen by some as an alternative to Keystone XL.

TransCanada Corporation’s $10.64 billion pipeline project, the largest tar sands pipeline proposed yet, would stretch west to east across Canada, starting from the tar sands mines in Alberta and traversing 2,858 miles across the country to multiple refineries in Quebec and New Brunswick from where the oil would be shipped out to Asia via new marine terminals in each of these provinces.

Much of the opposition to the project is over a deep-water terminal proposed for the tiny town of Cacouna, Quebec. Researches have long warned of the threat the Energy East project poses to the local beluga whale population. The terminal, located in the gulf of the St. Lawrence River, is located in the nursing grounds of the beluga, which is recognized by the province as an endangered species. And, although a court injunction forced a temporary stoppage, exploratory work is now ongoing, as is the grassroots efforts to oppose the project.

In October, thousands marched through the town of Cacouna (population 1,939) to protest the terminal. But, as of Oct. 30, the project became official when TransCanada filed a formal application for the pipeline. Environmental groups including Greenpeace and Environmental Defence Canada are digging in their heels and preparing for a battle with the energy giant, which is also seeking approval of its Keystone XL pipeline running through the United States to the Gulf of Mexico.

“Our application outlines how Energy East will be built and operated in a safe and environmentally responsible manner, while generating significant benefits for all Canadians,” says Russ Girling, TransCanada’s president and chief executive officer. “We have been out in the field for more than 18 months gathering data, performing environmental studies and engaging with Aboriginal and stakeholder groups in the initial design and planning of the project.”

The debate, set to rage in Canada leading up to the coming federal election in 2015, will sound familiar to those following the fight over the Keystone XL pipeline.

Environmental groups argue that the pipeline is unsafe and a bitumen leak would be devastating for the environment. The pipeline crosses hundreds of lakes and rivers and all are under threat should a spill occur. Several First Nations leaders too, have vowed to challenge any approval of the pipeline, which would run across some of their ancestral lands, and have warned of direct action if legal routes were to fail. In addition, critics say, the pipeline will lock the country into an archaic fossil fuel economy that will propel the country and the planet even more quickly towards catastrophic climate change.

TransCanada counters that the pipeline will ensure the country’s energy security, create thousands of jobs and billions of dollars in tax revenues. 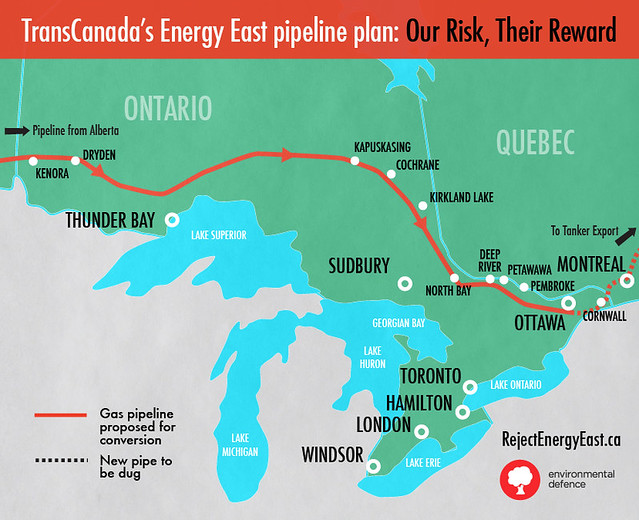 The pipeline, which would dwarf the size of Keystone XL, would ship more than one million barrels per day of Tar Sands bitumen to refineries in Eastern Canada and on to two major oil export terminals from where most of the oil would be shipped to overseas markets.

According to Environmental Defence Canada: “Filling the pipeline with oil could increase emissions by up to 32 million tons each year — the equivalent of putting seven million new cars on the road.” The project will convert an under-utilized part of an existing natural gas pipeline called the Canadian Mainline in addition to building new pipelines when needed.

Environmental Defence Canada calls Energy East “a key part of a plan to triple the size of Alberta’s tar sands over the next two decades.” That is indeed the the likely plan of the Canadian federal government, which has long favoured expansion of the tar sands mines.

Not surprisingly, the provincial government of Alberta was also pleased when the Energy East application was filed.

“The Energy East Pipeline represents a true nation-building project. Today’s application for approval is a significant step towards getting full market value for Canada’s resources, and will help the country realize its economic potential,” Premier Jim Prentice said in a written statement after TransCanada filed its application for the pipeline. “Not only will it connect the oil resources of western Canada with refineries in eastern Canada and to global markets, it will connect Canadians by creating jobs and supporting businesses from coast-to-coast. Energy East will also improve Canada’s self-reliance by significantly reducing the amount of oil that we import.”

But not all provincial heads echoed Prentice’s thoughts. On Nov. 21, Ontario Premier Kathleen Wynne and Quebec Premier Phillippe Couillard met to discuss the project and how they would work together to ensure climate change is addressed before the pipeline project is approved. In addition, Quebec issued seven conditions for approving Energy East in a letter to TransCanada from Quebec Environment Minister David Heurtel.

Meanwhile TransCanada has hired Edelman — a US-based PR company with a record of representing companies that deny climate change and oppose carbon emissions regulations — to help it build support for this new pipeline plan. A series of documents leaked last week reveal that Edelman strategy for this includes, discrediting environmental groups opposed to the pipeline and creating an Astroturf campaign touting the Energy East’s so-called environmental benefits. (Read about it here.)

However, opposition to the project is definitely gaining momentum, especially in Quebec. A recent survey of more than 1,000 Quebec residents conducted by Nature Quebec, The David Suzuki Foundation, Greenpeace Canada and World Wildlife Fund noted that 7 in 10 Québécois are opposed to the oil terminal in Cacouna and 87 per cent of respondents agreed that Quebec should have the right to refuse the entire Energy East project. An online petition by Nature Quebec signed by more than 50,000 people asks the Quebec government to save the belugas. Even the town of Cacouna is getting in on the act by stating its desire for a local referendum on the terminal.

“Energy East will be defeated. There is growing opposition in both Ontario and Quebec to this broken pipeline plan. Today, we see that reflected in the actions of the premiers of the two largest provinces,” says Andrea Harden-Donahue, energy and climate justice campaigner with the Council of Canadians, following the news that Ontario and Quebec would be putting up a united front on the project. “Energy East would put Ontarians and Quebeckers on the front lines of a possible massive oil spill and unleash climate pollution equivalent to adding 7 million cars on the roads. It would also spike natural gas costs. This pipeline is all risk and little reward for Ontario and Quebec.”