TransCanada Complains to NAFTA, Sues US for $15 bn Over Keystone XL Rejection

The other shoe has finally dropped regarding the controversial Keystone XL pipeline project, and it’s a big one. TransCanada is suing the United States for $15 billion for rejecting the pipeline project that would have carried crude oil from Canada’s Alberta tar stands to refineries on the Gulf Coast.

Last week, the Canadian company filed an arbitration claim under the North American Free Trade Agreement (NAFTA) over President Obama’s rejection of the pipeline, making good on its January threat to take legal action against the US decision.

According to the official request for arbitration, the $15 billion tab is supposed to help the company recover costs and damages that it suffered “as a result of the US administration’s breach of its NAFTA obligations.” NAFTA is a comprehensive trade agreement between the United States, Canada, and Mexico that went into effect in January 1, 1994. Under the agreement, businesses can challenge governments over investment disputes.

In addition, the company filed a suit in US Federal Court in Houston, Texas in January asserting that the Obama Administration exceeded the power granted by the US Constitution in denying the project.

Keystone XL is a 1,179-mile pipeline system that, if approved and constructed, would transport up to 830,000 barrels of tar sands crude oil from Hardisty, Alberta across the border into Nebraska eventually travelling down to refineries on the Gulf of Mexico. The project saw opposition from a broad range of groups including landowners in Texas and farmers in Nebraska as well as national environmental and indigenous rights groups.

President Obama had rejected the pipeline proposal on November 6, 2015 on the grounds that transporting crude oil from Canada wouldn’t help the US economy or increase the country’s energy security.

In response to this latest salvo from TransCanada, a coalition of environmental groups, including 350.org, Sierra Club, Natural Resources Defense Council, and Bold Alliance came out swinging at a press conference on Monday. They not only disputed TransCanada’s claims, but also turned the tables, using the NAFTA challenge as ammunition in the growing fight against the latest international trade agreement, the Trans-Pacific Partnership.

“This lawsuit from TransCanada is both absurd and a perfect illustration of why it is people around the world feel that elites are getting out of touch. The rejection of the Keystone XL pipeline came after one of the biggest exercises in democracy in recent American history,” said Bill McKibben, co-founder of 350.org. “The idea that after that many millions participating, it can somehow be negated by three guys sitting in a room that nobody has ever heard of and nobody ever voted for is all the proof anyone would ever need as to why these kinds of arrangements like NAFTA are things we should be wary of to a huge degree.”

In its claim, TransCanada asserts that the Keystone XL permit denial lacked validity and was done unfairly as a result of President Obama playing politics and that the decision wasn’t based on sound science. In a statement to the press, the company stated that the denial was “a symbolic gesture based on speculation about the perceptions of the international community regarding the Administration’s leadership on climate change and the President’s assertion of unprecedented, independent powers.”

“One, was a minimum standard of treatment and here TransCanada is essentially arguing that the US had led the company to develop reasonable expectations that it would be able to build the pipeline only to later reject it,” she said. “Second, was protection against indirect expropriation, and here TransCanada is arguing that while waiting for the permitting decision it had ‘no choice’ but to continue to make capital expenditures — which of course is not true, they did have a choice — and the rejection of the pipeline deprived the company of the ‘multibillion-dollar value’ in its investment. And there are two other claims under national treatment and most favored nation treatment.”

TransCanada also denies the assertion made by environmentalists that building the pipeline would result in an expansion of crude oil extraction operations in the Alberta tar sands and result in increased greenhouse gas emissions.

Those on hand at the press conference voiced strong opinions on the matter.

“The reality is that we have a system for permitting pipelines that involves an environmental review and that review process is not a rubber stamping process and it does dictate the outcome of permit decisions,” explained Anthony Swift, director of the Canada Project at the Natural Resources Defense Council. “Both EPA and State Department analyses show that in the environment the decision was made, Keystone XL was clearly associated with tar sands and carbon emissions expansion. Given both Canada’s and US’ climate commitments and the global need to realize a stabilized climate, the decision to reject Keystone XL was on a very sound basis clearly founded in the science.” 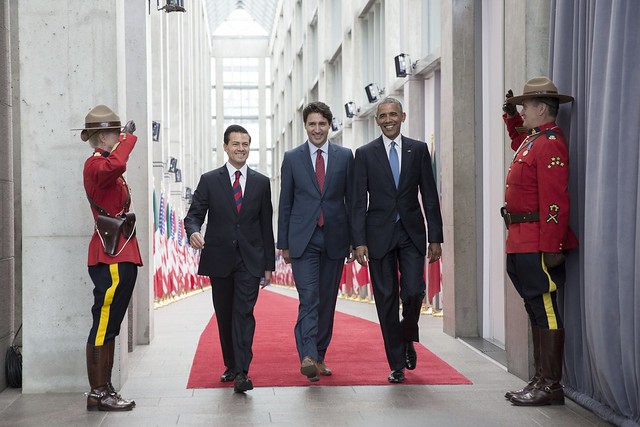 Photo by Lawrence Jackson, courtesy of the White House President Obama, Canadian Prime Minister Justin Trudeau and Mexican President Enrique Pena Nieto in Ottawa, at what has been dubbed the “Three Amigos Summit.”

Obama also said that he would keep working on the controversial Trans-Pacific Partnership trade deal that is currently stalled in the US Congress. All the current US presidential candidates oppose the 12-nation deal.

Given the current political climate, TransCanada’s move couldn’t come at a worse time for those supporting the TPP and those attending the press conference jumped on the chance to slam the deal.

“The fact that TransCanada was able to bring forward this case illustrates the mechanism in trade deals like NAFTA and the proposed TPP in which foreign corporations are given the power to turn to a private trade tribunal and demand compensation when a government takes ‘an unexpected step’ to protect our air, our water, our economy or the healthy of our families,” said Michael Brune, executive director of the Sierra Club.

Brune explained that fossil fuel companies are using private trade tribunals more than ever before, and that roughly half of all new cases in the past two-and-a-half years were filed by power, mining, or oil and gas corporations.

“TPP, if approved by Congress, would expand this corporate tribunal system more than any other past US trade deal,” Brune said. “Roughly double the number of corporations could follow TransCanada’s example and challenge US climate and environmental safeguards.”

Jane Kleeb, president of Bold Alliance, promises a return to the streets to protest TransCanada’s move as well as the TPP.

“I know that all the other groups that fought Keystone XL, all the tribal nations and the citizens will take action in the streets. We are not allowed in the NAFTA secret court system so Bold is launching an action sign up form on its website so citizens can have a voice and the place to focus their actions in the street,” Kleeb said.

“President Obama did not make a political decision; President Obama made the right climate, water, and property decision,” she added. “The Keystone XL was the first cross-border pipeline where a president in the United States used climate as one of the reasons to reject a pipeline permit, it won’t be the last.”

TransCanada has stated that the NAFTA process could take several years. The United States has never lost a NAFTA claim.