Ten tiny houses festooned with aboriginal artwork will soon be wheeled into the traditional territory of the Secwepemc Nation and placed in the path of a proposed new tar sands oil pipeline. The Tiny House Warriors anti-pipeline and Indigenous rights campaign led by Kanahus Manuel is set to oppose the Trans Mountain pipeline expansion project in a way that could transform the British Columbia interior into the next Standing Rock. 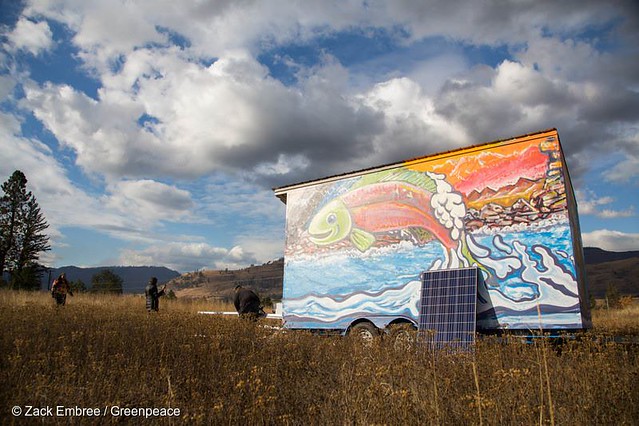 “What we want, what we aspire to, is what our ancestors wanted, to be able to live with the earth,” says Kanahus Manuel, of the Secwepemc Nation in British Columbia, and a member of the Secwepemc Women’s Warrior Society, leading the Tiny House Warriors resistance campaign against Kinder Morgan’s Trans Mountain pipeline expansion project. “Our people have done that for tens of thousands of years without destroying her and without contaminating the water. It has only been over the last 150 years that we have seen catastrophic change in our lives as Indigenous People.”

In Canada, the resistance to construction of new fossil fuel pipelines to facilitate further expansion of the Alberta tar sands was given renewed momentum thanks to the cancellation of the Energy East pipeline on October 5. Energy East is the second new crude oil pipeline proposal to be knocked down at least in part due to widespread public opposition. The first was the 2016 cancellation of Northern Gateway. Three other pipelines, however, have been approved and are facing strong resistance: Trans Mountain, Enbridge’s Line 3, and TransCanada’s Keystone XL.

The $7.4 billion Trans Mountain pipeline project would see the expansion of the existing Kinder Morgan line built in 1953. The new pipeline constructed beside the original would increase the capacity of the line to 890,000 barrels of crude oil per day, oil that would be sent to an export terminal on the coast of British Columbia in the city of Burnaby near Vancouver.

If constructed, more than 500 kilometers of the pipeline would cross the traditional territory of the Secwepemc Nation. Trans Mountain was approved late in 2016 by Canada’s federal government under Prime Minister Justin Trudeau, but since that time there have been numerous court challenges and a change in British Columbia’s provincial government.

“Approval doesn’t mean anything,” says Clayton Thomas Müller, Stop it at the Source campaigner for the climate advocacy group 350.org. “There are substantial First Nations-led lawsuits that could kill the project, the city of Vancouver, the provincial government, the city of Burnaby, multiple other municipalities, people who depend on the salmon economy. There are so many people opposed.”

The Tiny House Warriors campaign began construction on two seven-by-twelve foot homes that are nearing completion and were being outfitted with wood stoves as well as art murals this fall. A third home was built in Victoria in late October by local residents in solidarity with the Secwepemc Nation. In November, the house was moved to traditional Secwepemc Nation territory after it was adorned with a large orca painting (orcas are one of the animals that would be impacted by the pipeline project) by artists Christi Belcourt and Isaac Murdoch in Vancouver.

“We’ll take them out in a large caravan onto the territory,” says Manuel. “We are trying to get as much built as we can before the snow hits.”

Manuel was one of many Indigenous people from across North America who went to Standing Rock in 2016 to fight the Dakota Access Pipeline. She was arrested during a prayer walk, but the charges, including criminal trespass and engaging in a riot, were dropped when she appeared in a Mandan, ND courthouse in October.

Manuel was inspired by the tiny houses used in Standing Rock that provided shelter for those who came to join the Indigenous-led resistance.

“What Standing Rock showed was that thousands could come together with alternative ways of community,” Manuel says. “It was there that we made connections with people who built the tiny houses, and one lady said that she wanted to help and we gladly accepted the offer.”

According to Manuel, Secwepemc have been blocked from their traditional territories and forced to live on reservations by the federal government. Moving the tiny houses back onto this land is itself a bold act of protest. In addition to physically blocking the proposed pipeline route, the structures will act as construction monitoring stations, and will also be used as places of traditional knowledge where Secwepemc can go to learn about their culture.

“Our team [members] are keeping track of the Kinder Morgan locations and areas where they are applying for permits” for pipeline construction, she says. “There are two permits right now, one at Blue River for a man camp (construction camp) of 1,000 men. It’s one of our very beautiful areas in our territory. It’s horrific. We don’t want them.”

Constructing infrastructure in the path of fossil fuel projects is a growing trend when it comes to the climate change protest movement and one that most recently has included building everything from solar energy panels to chapels, and more.

Manuel is the daughter of the late BC aboriginal leader Arthur Manuel, a highly regarded politician, activist and organizer who, amongst many other things, participated in the United Nations Permanent Forum on Indigenous Issues and the Convention on Biodiversity Conferences of the Parties in The Hague.

The Secwepemc territory has already seen more than its fair share of environmental disasters, including the 2014 Mount Polley mine disaster when a breach of a copper and gold mine tailings pond resulted in toxic sludge pouring into Quesnel Lake, the (once) cleanest deep water lake in the world, and surrounding waterways.

“We’ve seen the provincial and federal governments completely ill equipped to deal with an environmental disaster of that magnitude,” says Manuel. “And they want to send 890,000 barrels of heavy crude through our homelands, 518 kilometers unchecked, unmanned, unmonitored? The province is unequipped to even deal with the length of pipeline they are proposing.”

The Secwepemc Nation released a report on October 16 entitled Standing Rock of the North: The Kinder Morgan Trans Mountain Pipeline Expansion Secwepemc Risk Assessment, which outlines in detail their objections to the project. Manuel also recently traveled to Europe alongside Indigenous representatives from Standing Rock and Cedar George Parker of the Tsleil-Waututh Nation in BC, one of the First Nations fighting Kinder Morgan in court. They were there meeting with French banks including BNP Paribas to talk about pipeline divestment.

Manuel is battling the pipeline from numerous angles, but asserts that it comes down to the need for First Nations in Canada to give their free prior and informed consent to these massive energy projects as stated in the United Nations Declaration on the Rights of Indigenous Peoples, a declaration the Canadian prime minister Justin Trudeau has promised to implement, but has failed to thus far. About two-thirds of First Nations impacted by the Trans Mountain expansion have not given their consent, according to the Secwepemc report.

“We are done with it. The Tiny House Warriors campaign is saying we are done with it, and we want solutions for our people,” says Manuel. “When people destroy and hurt our land, we feel it, that land trauma. We don’t want to feel that and we will do whatever we can because we are mothers and we care about this land, we are the people of this land, we are Secwepemc. Secwepemc, the land of the spilling waters. We care for the spawning grounds. We care for the water. We are the protectors for everybody.”