There Can Be No Meaningful Action on Climate Change Without Women

I took part in my first environmental march on April 22, 1970 in New York City. Dressed in our Sunday best, my little sister and I clung to our mother’s hands as she steered us proudly down Fifth Avenue. We celebrated the beneficence of our planet with the one million people who joyfully thronged the city’s major thoroughfare and converged in Central Park, confident that preserving clean air, fresh water, and food security were basic human values shared by most, if not all, of the world’s citizens.

Photo by Ollivier Girard for Center for International Forestry Research (CIFOR)The impacts of climate changes are different for women and men, with women likely to bear the greater burden in situations of poverty.

Mom raised us on the stories of women leaders — conservationist Rachel Carson, often considered the mother of the American environmental movement, whose investigations into chemical pollution of air and water made an unprecedented impact on the mainstream public and engendered the Environmental Protection Agency. At the dinner table we discussed New York Congresswoman Bella Abzug, a singular woman who early on made the connection between women’s rights, human rights, and the integrity of the environment by founding the Women’s Environment and Development Organization, one of the United Nation’s largest nonprofits. We chuckled at her outrageous hats and cheered her bold and witty confrontational style. In my family, the importance of women in ensuring the survival and resilience of our planet was never in doubt.

In 2009, working with the Global Call for Climate Action around the UN General Assembly and COP 15, I was given a brusque wake-up call on current status of women and our climate, which is so far from what we envisioned in those heady days of the early seventies. In short, despite all of the warning signs that had been visible more than forty years ago, the climate had become severely degraded by unfettered global carbon emissions and the women of the developing world were suffering the worst impacts. But I also learned of an inspirational “silver lining.” Gathered at the UN was an extraordinary group of women leaders: Women from tiny island communities, women peasant farmers from Africa, and American women of color from the Gulf Coast towns and cities who had suffered through Hurricane Katrina. In a weird twist of fate, climate change was actually accelerating women’s leadership. Somebody had to deal with the mess, after all.

Two studies published in the late aughts, one by the London School of Economics and the other by the UN Population Foundation, make it clear that when it comes to climate change we ignore gender differences at our global peril.

The 2007 London School of Economics report found that natural disasters are more likely to kill women than men, and that this disparity is largest where women’s socioeconomic status is lowest. The 2009 UNPFA report highlighted women as an “untapped resource” in addressing climate change and supported a gender-sensitive approach to policies, projects and funds. Although the data has been available for some time now, women’s groups continue to face an on-going challenge to gain recognition and consideration for these differences at the policy and planning levels. What is still missing is a universally accepted measurement for what we already know anecdotally — that when women are fully enfranchised in the decision-making process, community resilience is much stronger and durable.

This is a particularly significant year for action on climate change, real and substantive action on climate change will require the full participation of women. The Women’s Earth & Climate Action Network, International (WECAN) has chosen September 29 for a global demonstration of the power of women and their allies. The Global Women’s Climate Justice Day of Action aims to galvanize the world’s women and their supporters around a variety of activities that will include circulating visual images with climate justice messages; local marches and demonstrations; protests at fossil fuel extraction sites; educational events; art projects; and other public actions and statements to highlight local struggles and solutions being offered by communities. 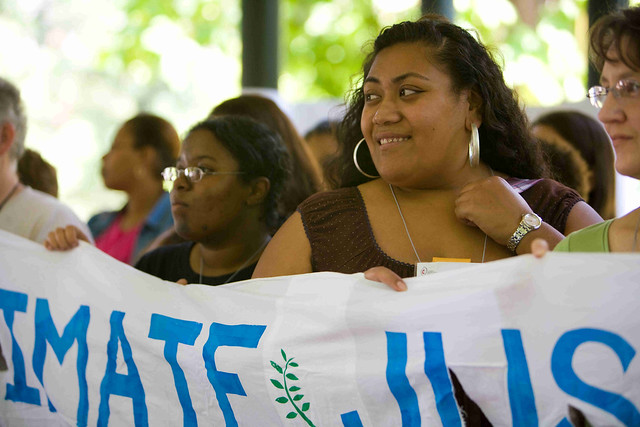 We’ve chosen September 29 for this women’s climate justice mobilization to harness momentum on the road to pivotal UN climate negotiations happening later this year in Paris, and to push world leaders to hear our calls for bold action while they meet for the annual UN General Assembly in New York City at this time.”

Climate Wise Woman Thilmeeza Hussain will be speaking at the hub event of global activities at the UN Church Center in New York City on the day of the action. She will be joined by other distinguished women such as former Irish president Mary Robinson, Nobel Peace Laureate Jody Williams, Jacqui Patterson (NAACP), Patricia Gualinga (Sarayaku, Ecuador), Melina Laboucan-Massismo (Lubicon Cree First Nations) and May Boeve (350.org), among others, who will be speaking out against harms to their communities due to climate change, extractive industries, and social injustices. These women leaders will be presenting the diverse array of visions and strategies with which they are working to shape a healthy and equitable future.

Hussain is from Maldives, the necklace of 1,800 tiny islands flung across the Indian Ocean that make up Asia’s smallest country. It’s the most low-lying nation on the planet. Hussain, who is also the co-founder of Maldives’ sole women and climate NGO, Voice of Women, says that despite the extreme vulnerability to climate change impacts, Maldivian women have been slow to organize around the issue.

“It’s very challenging to mobilize,” she says. “One of the difficulties is to reach women outside of the capital the capital, Malé. Since 2012, Voice of Women has been under a political microscope because of our support for former President Mohamed Nasheed who was ousted from government in an illegal coup. Our activities have been very restricted.”

Photo courtesy of Climate Wise Women Climate Wise Woman Thilmeeza Hussain of Maldives
will be speaking at the hub event at the UN Church
Center in NYC during the Global Women’s Climate
Justice Day of Action on Tuesday.

“Climate change is not a distant threat, but something we Maldivians feel today,” Hussain adds. “People are losing homes due to beach erosion, coral reefs are damaged, fresh water is polluted. And our limited funds have been diverted from providing education and health towards trying to cope with this crisis. We’ve lived on these islands for 3000 years, in harmony with nature, and we are definitely not giving up without a fight.”

Former Irish President Mary Robinson, the first woman to be elected leader of the Republic of Ireland who now leads the Mary Robinson Foundation Climate Justice, has spent the better part of a lifetime listening to grassroots leaders such as Thilmeeza Hussain and has been a tireless advocate for justice for their countries and communities:

“The impacts of climate changes are different for women and men, with women likely to bear the greater burden in situations of poverty. To ensure climate justice for women, their voices must be heard and their priorities supported,” Robinson says. “In many countries and cultures, women are at the forefront of living with the reality of the injustices caused by climate change. They can play a vital role as agents of change within their communities and must be empowered to do so.”

In fact, women organizing to protect natural resources and develop community resilience is not a new phenomenon. In the 1970s a group of peasant women in the India threw their arms around trees to prevent the destruction of forests in Northern India in an action that came to be known as the Chipko, or Treehugger Movement. Led by Nobel Laureate Wangari Maathai, the Kenya-based Green Belt Movement mobilized rural women to plant trees to restore plundered forests, generate income and serve as an engine of empowerment. In the 1980s, American Lois Gibbs led the famous Love Canal protest in upstate New York to expose and rectify the toxic waste dump over which her town had been constructed. Her years-long struggle inspired her to organize women and people of color around the common interest of climate justice. Canada’s Tzeporah Berman has been on the frontlines of community-based movements against environmental threats since the 1990s when she was in the forefront of the Clayoquot Sound protests against the unconscionable clearcutting of temperate rainforest in Western Canada. More recently she has led acts of civil disobedience against the transnational pipeline and tar sands expansion.

The women mobilizing for September 29 may not yet be known as leaders or heroes, but the Global Women’s Climate Justice Day of Action is one more potent opportunity to tell their stories. It’s an opportunity for global women to join hands, just as my mother and sister and I did 45 years ago, and take their rightful place at the front of the parade, as essential catalysts to solutions to our greatest of all challenges.