The Road That Exposed Peru’s Amazon

A drive along the Interoceanic Highway shows how it has opened the rainforest to mining, agriculture, and deforestation
Jurriaan van Eerten

Driving out from Cusco, Peru, the Interoceanic Highway swirls a few hours over the Andes highlands before it plummets down into the jungle. The change in the surroundings is impressive: rocky hills with low-lying scrubs make way for lush vegetation and waterfalls along steep cliffs. In this green, pristine landscape, some farmers try to eke out a living on inclined farmlands, growing corn and cassava. 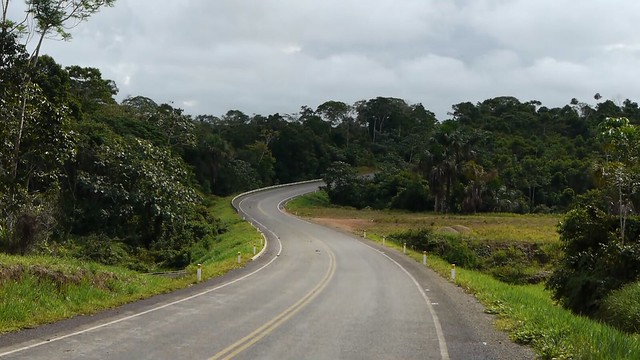 Photo by Connectas Americas The Interoceanic Highway, which connects the Atlantic coast of Brazil with the Pacific coast of Peru, has increased access to remote parts of Peru.

The next big landscape change comes the moment I have fully descended, some 10,000 feet from where we began, and arrive close to a little town called Mazuco. There I find myself in the midst of a swampy area, full of muddy water and plastic waste, where twisted formations of dead trees are a reminder of the forest this once was. This is gold mining territory, and mining, rife with detrimental impacts for the environment, has been made easier by the road I just travelled.

The Interoceanic Highway, which connects the Atlantic coast of Brazil to the Pacific coast of Peru, was finished in 2012. But access to this remote region increased during the years of construction, between 2003 and 2011, even before the road was completed. Environmentalists, who worried that easy access to the region would increase environmental destruction and impact indigenous communities, protested against the construction of the road. Migrants from the high Andes would suddenly have an easy paved way into a gold mining paradise, to the detriment of local people and wildlife. What used to take days would become a ten-hour bus ride from Cusco.

The environmental advocates were right. Since 2010, gold mining around Mazuco, which lies close to the Madre de Dios river, has increased substantially. More recently, it has also increased within the boundaries of the Tambopata National Reserve and two other nearby reserves, all within the Amazon rainforest. The result is the swamp I find myself in, which can be easily spotted with Google Maps: the satellite images show a yellowish-brown lunar like landscape in the middle of the jungle. And mining is just one of the environmental ramifications of the highway.

In January, before embarking on my trip into the Amazon, I had coffee in Lima with Peruvian journalist and researcher Gabriel Arriaran, who has been visiting the Madre de Dios regional capital, Puerto Maldonado, since 2002. One of the first things he mentioned was the road.

“When I started going to Puerto Maldonado, I had to travel for three days, hitch-hiking with trucks all along a dirt road,” he says.

A week after speaking with Arriaran, I headed out. Passing Mazuco and the gold mining district, it’s another two-hour ride through the pampa, the grasslands, to get to Puerto Maldonado. Due to its proximity to the mining zone, this city is quickly growing.

Izaiah, a taxi driver on one of the three-wheeled motor taxis common in the area, takes me on a ride through the city. Driving, he shouts back to me over his shoulder: “Everyone looks for gold here. You can find thirty grams on a good day. That’s $500. There’s an abundance of minerals in the jungle.”

The gold rush is leaving its mark on this corner of the Amazon. The miners use tons of mercury to extract the gold flakes from the sediment, which ends up in the water and the soil. As mercury is highly toxic in any form or chemical bond, severely affecting the neural system, the contamination has implications for local communities. (Read more about informal gold mining operations in the region.)

The government has increased its crackdowns on the gold miners, our taxista tells me, but that doesn’t matter, because everyone is involved anyway. The only thing stopping the miners is the rainy season: The holes from which the miners suck up the gold-rich sediment are currently filled with rainwater.

His story is confirmed when I talk to organizations working in the field. Oscar Guadalupe, from the NGO Asociación Huarayo, which works to address social and environmental impacts of mining in the region, said that often a warning goes out to the miners when the police plan to take action, because the miners have friends within the police. The miners hide the machines used to suck out the sediment by wrapping them up and dropping them into the holes, taking them out after the police raid is over. “But,” adds Guadalupe,. “I believe it is not fair to only point our finger towards the miners or corrupt officials. There is a strong international demand for gold for banking and government reserves, which creates this situation.”

In Puerto Maldonado I meet Manuel Delgado, an enthusiastic local veterinarian who invites me for a ride in his jeep to the border of Brazil along the Interoceanic Highway. “Though everybody just writes about the gold mining, that’s not the only problem here,” Delgado says. “All along the road you will see how commercial thinking ruined the jungle.”

Two days later, I join Delgado and drive out of Puerto Maldonado’s muddy streets, across the Billinghurst Bridge over the Madre de Dios River. Built in 2011, this 750-meter bridge resembles San Francisco’s Golden Gate and connects the old town center to a newer neighborhood of little houses with corrugated iron roofs. The next four hours show the real difference an asphalt road makes in jungle territory. First we see fields and fields of papaya. In the middle of these, lonely high Brazil nut trees still stand. By Peruvian law, it is forbidden to cut these trees down — only their nuts may be sold commercially. The idea behind the law was that Brazil nuts would make the forest economically viable, and that as a result, people would protect the forest ecosystem to safeguard this resource.

Though the Brazil nut industry may hold some promise in terms of forest protection, the law hasn’t been entirely successful — the region, now more accessible than ever, is under assault from agricultural interests.

Photo by Marco Simola for the Center for International Forestry Research Brazil nut trees remain in Peru where the rest of the forest has been cleared for papaya cultivation.

A little bit further on, as we continue towards Brazil, we stop by the side of the road where we can see stacks of burned wood. Since the certifications for sustainable wood have come into existence, it’s become easier to burn the wood into charcoal and sell it that way — sale of charcoal can be done without certificate. In the cities, Peruvians are fond of grilled chicken, which has created a huge demand for charcoal from restaurants that want to be able to prepare the food.

“It comes in waves,” sighs Delgado, who knows many people in this area personally due to his veterinarian work, referring to the assaults on the jungle. “At first it was the illegal loggers who came. The gold mining followed. Now the newest thing is the papaya, because a virus destroyed papaya fields in other parts of the country. But I don’t believe the papaya will last long; I heard the first cases of the virus have occurred here too.”

Closer to the border with Brazil, the papaya fields change into grasslands where cattle is raised. Cattle ranching is relatively new to Peru, compared to Brazil, where it has already impacted huge tracts of the Amazon. As we continue along the highway some Brazil nut trees are the only remaining signs of what once was the jungle.

In the days we spend driving towards the Brazilian border, the Odebrecht-scandal unfolds: It is revealed that the Brazilian construction company bribed its way into concessions all over Latin America, including for road construction, and three Peruvian presidents have been implicated in the scheme. The Peruvian part of the Interoceanic Highway is, in fact, built by Odebrecht.

Once we reach the border, rain starts pouring down, reminding us of the rainy season we are in. We take cover in a restaurant. Here, suddenly, everything is truly Brazilian from the melodic tones of the Portuguese language to the all-you-can-eat buffet.

Throughout the trip I’ve have seen a glimpse of the broad impact of the construction of a road through the jungle. With the road has come easier access, more people, and growing commercialization of this once remote part of the Amazon. And I’ve seen only a fraction of the impact — from the Interoceanic Highway, there are now secondary roads whirling even deeper into the jungle. Satellite images don’t lie: In the past decade, more than 400,000 hectares of forest have been lost in Madre de Dios.

The Interoceanic Highway is now complete, but the issue of roads in the Peruvian jungle has become newly relevant since Peru’s President, Pedro Pablo Kuczynski, made a promise last year to connect the city of Iquitos, a jungle outpost of 400,000 inhabitants in the northern region of Loreto, to the rest of the country by road. This project has been proposed for the same reason as the Interoceanic Highway was: to economically develop the region.

The Peruvian president said he knew a road to Iquitos would be “‘environmentally controversial,” but he believes strong enforcement of environmental laws will mitigate environmental damages. It’s the same promise that was made when the Interoceanic Highway was constructed.