The Right Climate for Learning

National Park Service Ranger Brian Ettling queues up his presentation on climate change with the familiar notes of the 1966 film The Good, the Bad, and the Ugly. Ettling, who has served as a seasonal ranger at Crater Lake National Park for 23 years, began developing his talk in 2010.

Like many national parks, Oregon’s Crater Lake is showing the impacts of climate change. Average snowpack has declined by 140 inches, more than 11 feet, since the 1930s. Warmer temperatures have compromised populations of pika, a small mammal that prefers rocky alpine slopes, and favored beetle populations that have killed many iconic whitebark pines that grow on Crater Lake’s rim. Even the clear, deep water of the lake may be threatened, as increased water temperatures may fuel algae blooms.

When communicating these grim facts, Ettling has learned to include a healthy dose of humor. That’s where the characters from the Clint Eastwood classic come in. Ettling calls the pure beauty of Crater Lake “The Good,” the negative impacts of climate change on pikas “The Bad,” and the destruction caused by pine bark beetles “The Ugly.” 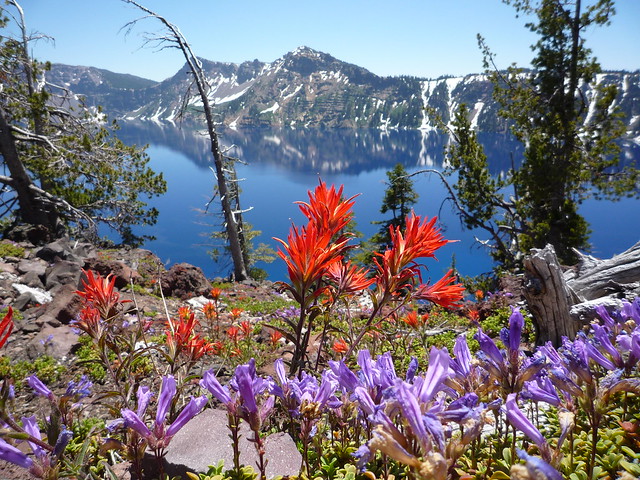 “I firmly believe that if people are laughing with me, they are more likely to listen to a controversial subject like climate change,” says Ettling.

Though he developed his ranger program for Crater Lake, Ettling first confronted the issue in a very real way while a seasonal ranger at Everglades National Park in Florida. Faced with more frequent and violent storms and the threat of sea level rise, Everglades National Park is on the front lines of climate change, and the park’s interpretive staff were among the first in the NPS to proactively educate visitors on the topic.

In 2010, under the leadership of Director Jonathan Jarvis, NPS launched its formal Climate Change Response Program. One of its four directives is to incorporate climate change education throughout the park system.

The first step toward implementing this directive is to educate NPS staff. The NPS has developed training tools to this end, including webinars and a climate change communication toolkit offered through Earth to Sky, a partnership between NASA, NPS, and the US Fish and Wildlife Service. Seasoned rangers like Ettling have also shared tips for effective communication during conventions and other NPS events.

“We know that one of the barriers to broaching the subject is the fear that it will generate some kind of controversy,” says Larry Perez, communications coordinator for the Climate Change Response Program. “But controversy can be a springboard to learning. Part of the training is to let staff know that we’ve got their backs.”

According to Perez, there is a disconnect between rangers’ perceptions of visitor expectations and what visitors actually want to learn. Specifically, some rangers are concerned that visitors won’t be receptive to climate-related content.

To the contrary, “Park audiences are more accepting of the science [than the general public,] and they’re open to learning more,” says Perez, citing a 2011 survey which polled visitors and staff in parks and wildlife refuges in five regions. In particular, the survey revealed visitor preferences for communication and education in the park, and that visitors would rather first learn about climate change through “personal media,” which includes websites, exhibits, signage and printed material, rather than through campfire chats and other in-person programs.

“We’ve worked off of that [information] to prioritize how to invest in communication,” says Perez. At Crater Lake, for example, visitors can attend Ettling’s summer evening program, but they can also take home a one-page handout, which includes a graph of declining snowfall and narratives about pikas and pine trees. Several parks, including Everglades National Park, include a Climate Change tab on their websites, with links to research and information.

Visitors can also learn about climate change first hand, by participating in scientific research. In Great Smoky Mountains National Park, Susan Sachs, education coordinator for the park’s Appalachian Highlands Science Learning Center, leads a program that recruits “citizen scientists” to help with phenology monitoring. At twenty-eight sites representing different ecosystems and elevations throughout the half-million-acre park, key species of trees and flowers are monitored for the timing of leafing, flowering, and fruiting. Trained volunteers can adopt a plot for the season. Under the supervision of rangers, middle and high school students help with bird and amphibian monitoring at four of the sites.

Launched three years ago, the citizen science program has both pure science and education goals. Data gathered through the program will be used to track changes over time. It will also be used to educate visitors about changes already underway.

“We want people to understand that we are experiencing climate change now, not some time in the future,” says Sachs.

One way climate change is already impacting Great Smoky Mountains inhabitants is “the craziness of spring,” says Sachs. Wilder temperature swings are prompting some trees to bud early. A hard freeze after blooming can compromise the berry and nut crops, which bears rely on in the fall. Scarcities can prompt bears to plunder campgrounds in search of food — an impact park visitors can easily understand.

But visitors need not make a big commitment to participate in phenology monitoring. Anyone can collect data on any plant at any time and enter it into a database called Project BudBurst. Launched in 2007, this program seeks to compile an ecological record of the timing of events such as leafing and budding, with the goal of understanding how plants are responding to changes in the environment. A handful of “Parks Partners” — including Great Smoky Mountains National Park, Mammoth Cave National Park in Kentucky, and Rocky Mountain National Park in Colorado — have formalized their collaboration with the BudBurst program, and have identified several key species for which they would like monitoring data.

“We get a lot of families who want to do something for one day on their hike,” says Sachs. “Anyone can download the Project BudBurst app, and it’s incredibly easy to use.”

In addition to the parks collaborating with Project BudBurst and the monitoring program at Great Smoky Mountains National Park, several other parks, including Joshua Tree, Saguaro and Grand Canyon National Parks, have launched phenology monitoring research projects involving citizen scientists. Once enough data is gathered, it can be used to educate a wider audience.

“We need at least 10 years of data, ideally 25 to 30,” says Sachs of the Great Smoky Mountains project. “But this fall we will start looking at what to do with our data, and how we can make it meaningful.”

The Young Leaders in Climate Change program, which since 2010 has recruited upper-level college and graduate students to help develop climate change-related programs and research in various national parks, also underscores the NPS’s commitment to climate change research and education. Several of this summer’s twelve internships include an educational or interpretive element.

Educating visitors about melting glaciers and shifting plant and animal populations is only half of the equation, however. The park service has also been working to make the park system itself more climate friendly.

“One of the Park Service’s major aspirations is to become a leader in mitigating its carbon footprint,” says Perez.

Though the NPS had been “greening” its facilities on a park-by-park basis over the years, the 2012 Green Parks Plan formalized the effort by outlining nine goal areas and tracking progress towards discreet targets such as reduced carbon intensity and water consumption.

Many of the improvements, which include everything from renewable energy installations to LEED-certified visitor centers, also serve as demonstration sites, introducing visitors to technologies and strategies they could potentially implement at home.

At Everglades National Park, for example, solar panels light the visitor center parking lot, and a solar thermal system heats water at the Flamingo Campground; visitors can also take a biodiesel-powered trolley tour. And Crater Lake National Park recently installed an electric vehicle charging station. Through these actions and many more, these parks have been designated Climate Friendly Parks — two of over 120 that have earned this status from the NPS.

“I always talk about the things we’re doing to reduce our carbon footprint,” says Ettling, who also maintains a blog about climate change. “One thing I preach to colleagues is, don’t talk about the problem unless you also talk about solutions.”

NPS is serious about helping to find — and share — those solutions. Given that over 300 million people visited our national parks in 2015 alone, NPS has the unique opportunity to educate and motivate a great many people all over the country.