The Path Ahead From Paris

Paris was an unambiguous endorsement of ecosystem integrity and the need to move beyond fossil fuels. Protecting forests was much discussed and promoting an agricultural systems with carbon rich soil was introduced. That’s really huge – hard to overstate. 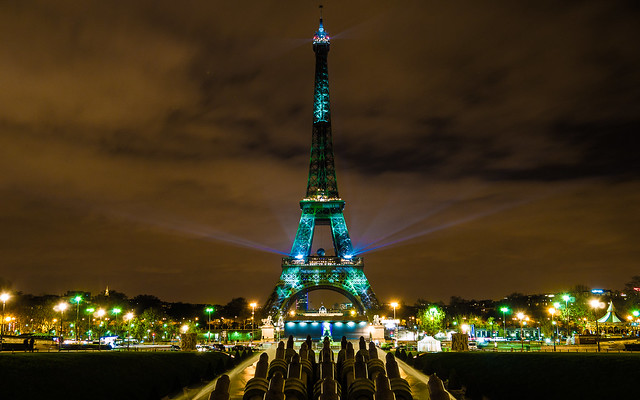 photo by Yann Caradec, on FlickrThe Paris Agreement alone won’t get us back to healthy blue skies, but Paris’ achievements should be appreciated as a major step forward.

While any of us can (and should) kvetch about what didn’t happen or didn’t happen well enough in Paris, here is a list of some of the positive outcomes that can help inspire the ecological-truth-telling-troops. The Paris Agreement alone won’t get us back to the healthy blue sky (280 ppm) gifted to us by the Holocene time period, but Paris’ achievements should be appreciated as a major step forward together.

The main culprit is the industrial economy. This capital growth-oriented economic system fosters the wrong technologies, wrong lifestyle, and wrong worldview. It kills the cathedral forests, the mighty oceans, and the blue sky – threatening much of life on earth. The economy’s mining, manufacturing, advertising, and high-finance captains disregard the ecological consequences of their powerful technologies. Locked into to a global economic system, most regular folks are led astray, while just hoping to get by. Simply put, the global economy’s very design disregards massive ecological impacts (pollution externalities). Coupled with outrageous financial greed and power, the unsustainable industrial economy shows a profound lack of reverence for the spirit of nature and life itself. This is not a wise path.

This is half the story. This is what must be stopped. It is not the better system we seek to achieve. Our movement seeks the health and livability of the whole planet – land, air, and sea. We want this for all people and the entire web of life. Over geologic time our planet’s earth systems evolved to nourish all life. We, as living breathing animals, are embedded in this great system. The human economy needs to support dignified lives for all. First, a better economic system will no longer hide or allow pollution externalities. Second, it must clearly honor nature’s carrying capacity limits in all nine of the key earth systems. Not polluting and staying within limits are two pillars of a biosphere smart economy, one that will protect and restore damaged earth systems. Working together to build a biosphere smart economy will also help us achieve many other humanistic objectives for a socially just world. This is the wise path that we need to take.

We have to keep working to shift the frame of this final battle to include the polluting industrial economy as a root problem. Emphasize that the solution is to build a biosphere-smart earth system-based economy, which will get us to the ultimate goal of a healthy planet.

Guard against technology’s unanticipated consequences. Seek vibrant, dignified, low impact lifestyles for all. Birth rates must fall. To help return humanity to our world’s limits, there needs to be many fewer of us.