Ian Angus’ Facing the Anthropocene: Fossil Capitalism and the Crisis of the Earth System is required reading. Why? Angus weds natural and social processes of planetary import in 2016. To this end, his “essential background and context” advances a vital discussion. 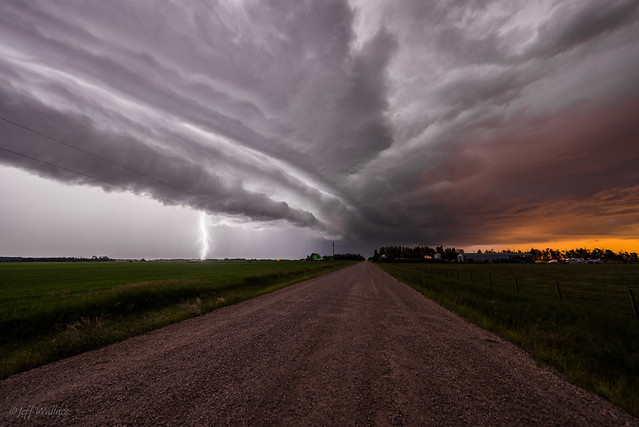 Photo courtesy of Jeff WallaceTo impress upon readers the magnitude of the systemic environmental crisis, Angus dives into the work of scientists such as atmospheric chemist Paul J. Crutzen, who redeployed the word Anthropocene in 2000.

The book, short and sweet at 277 pages, joins a literature of eco-social critiques from radical writers such as Paul Burkett, Brett Clark, Rebecca Clausen, John Bellamy Foster, Naomi Klein, and Stefano B. Longo. Foster’s Foreword sets the stage for Facing the Anthropocene.

In part one of the book, Angus unpacks the science of the Anthropocene, a proposed geological term for a biophysical phenomenon that dates from the dawn of industrial capitalism, emerging out of feudalism. Stage one of this process arrives in the early 1800s. The system, global from the get-go, degrades nature and people; both are transformed into commodities with prices in the marketplace. Capital’s imperative to “grow or die” propels the plunder of the global South, via armed conquest. Angus describes stage two of the Anthropocene as a “Great Acceleration,” which begins in the 1950s, the so-called “golden age” of capitalism. Its main features are rapid growth fueled by polluting energy that relentlessly damages the planet and people through petrochemical use and nuclear weapons tests. Meet “fossil capitalism.”

To impress upon readers the magnitude of the systemic environmental crisis, Angus dives into the work of scientists such as atmospheric chemist Paul J. Crutzen, who redeployed the word Anthropocene in 2000. Crutzen and his colleagues’ work on the Anthropocene and its preceding geologic age, the Holocene (the roughly 11,000 years of human civilization) makes for bracing reading. Backed by hard data and evidence, the new research reveals the extent of the recent disruption capitalist society has we have caused to Earth systems. Against that backdrop, we read about the geological history of sudden climate changes. Such occurrences took place in the past without the record amount of carbon in the atmosphere that’s creating climate chaos now.

To be clear, and Angus is on this angle, human impact drives the Anthropocene. However, the blame doesn’t lie equally on all humans, especially not on the 3 billion people of the global South living in abject poverty. As he puts it, we are not all in it together from a class perspective. Instead, Angus’ narrative of class and power points to rich nations’ impacts on the global ecosystem. He develops the reasons why – corporate-state war and waste driven by the desire for private power and wealth, Big Oil’s capital (multi-trillions of dollars marinating politics) and endless US wars (direct and by proxy) – in the second part of the book. 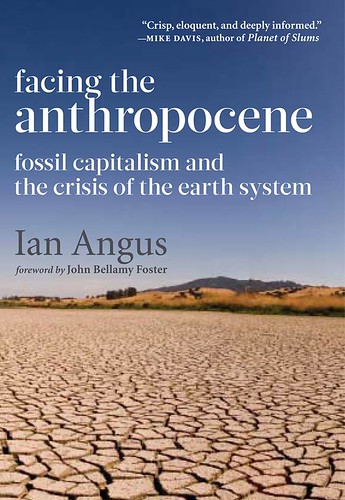 The theme that capitalism creates and destroys simultaneously, a key insight of socialist philosopher Karl Marx, shapes Angus’ book. This understanding is more than an economic equation, and it contrasts with the theory of the marketplace, posited by Thomas Malthus and his current offspring of market fundamentalists, that there exists a self-regulating market that reflects natural law.

Alternatively, Angus writes, the Anthropocene is a “socio-ecological phenomenon – a qualitative change in the relationship between human society and the rest of the natural world.” The economy, he says, is a part of, not apart, from society. The second part of Facing the Anthropocene develops that notion, a crucial one, in my view.

Nature’s time, in contrast to the short-term window that capital demands to grow (rapid flow for faster return on investment), emerges in the work of German chemist Justus von Liebig writing as far back as the mid-1800s, said: “In England, soil provided essential nutrients that allowed plants to grow, and replenished its store of these nutrients from plant and animal waste. Capitalist agriculture interrupted that cycle by preventing the return of wastes, causing soil fertility to decline.” Von Liebig used the term stoffwechsel – metabolism, or the biological and chemical links between animals, plants and soil – to describe this natural process. The thesis of a rift in the metabolism between living things and the planet recurs in part two of Angus’ book.

As he explains, the emergence of fossil capitalism is also a tale of its growing global and imperial reach. From mill owners adopting coal and steam to fuel production, Angus narrates how the roots of war and waste as profitable outlets for capital reached a zenith in the twentieth century. The outcome of two world wars proved to be a boon for investment capital, partially via the epoch-making and environmentally destroying invention, the automobile. Private cars and suburbs are twin developments that connect with military pollution and global production. Angus excels at making such connections.

As the “Great Acceleration” takes off in the mid-twentieth century, we rush headlong into the Anthropocene. A systemic creation/destruction drive is clear. Prosperity for some and poverty for many, propelling environmental decay.

Research by former NASA scientist James Hansen who Angus cites frequently, describes the effects of this trend, and issues dire warnings of ecological doom if structural changes to the current system of production, transportation and consumption do not begin soon.

In part three of the book, Angus discusses an alternative future of eco-socialism. Here, there are no recipes to follow. Yet one thing is clear, he writes. A post-capitalist alternative must have as its basis human solidarity over individual voracity, cooperation instead of competition. I see the 350.org, Black Lives Matter and Fight for $15 (minimum wage) groupings as signs of such tendencies in the current phase of the struggle for equality and justice.

Angus, editor of a web journal Climate & Capitalism, has written a book for readers to discuss and debate, not to take as gospel, but to nurture serious thought and work in humanity’s bid to avoid ecocide.