In Review: Under the Dome
Ed Rampell

Viewed more than 200 million times online since its late February release, a hard hitting anti-pollution documentary went viral in the Peoples Republic — until China’s so-called “Great Firewall” removed the compelling Internet sensation from Chinese websites. The self-financed Under the Dome is created and presented by Beijing-based investigative reporter, TV/radio host, and author Chai Jing. Complications surrounding her daughter’s birth inspired Chai to make this reportedly $167,000 nonfiction film that energetically tackles China’s energy status quo, pulling no punches. Her documentary, and the government’s suppression of it, is a case study of the current state of the Chinese environmentalist movement, which has previously used film as an organizing tool. 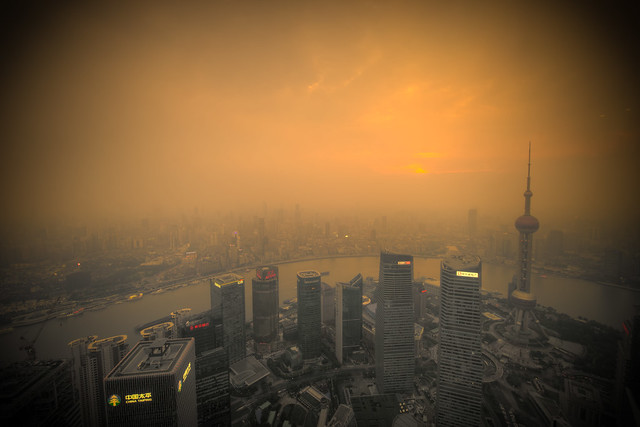 Photo by John ChandlerSmog in Shangai. Under the Dome investigates the enormous air pollution crisis in China, which is industrializing at a rapid pace.

Jing borrowed the title of her documentary from a CBS sci-fi mini-series with the same name starring Dean Norris (based on a Stephen King novel), wherein a mysterious, transparent force field descends on an American town, cutting it off from the outside world. In Jing’s doc this malevolent power becomes the rampant air pollution generated by China’s largely unregulated fossil fuel industry.

Audiences will be familiar with Under the Dome’s cinematic style: As in 2006’s Oscar-winning An Inconvenient Truth, wherein Al Gore made a power point presentation about climate change, Jing, too, presents an ecology-themed audio-visual work before a live audience. Clad in a white shirt and blue jeans, the confident, well-spoken journalist stands in front of a large screen, flanked by flat screen monitors, and narrates in Chinese the eyebrow raising 103-minute presentation before a crowd of young people sitting on the floor. Under the Dome utilizes previously shot material in China, London, and Los Angeles, including Jing’s interviews with government and energy industry officials, scientists, regulators, etc., as well as original animation, archival footage, and well-made montages.

Jing makes no bones about her eco-stance, setting the tone of her agitprop film early on by proclaiming: “This is a battle between me and air pollution.” Under the Dome includes harrowing images and information as Chai investigates the enormous air pollution crisis of a China which, she asserts, is industrializing at the fastest pace of any developing nation in history, accomplishing in only 30 years what it took other countries a century to do. “China burns three to four times the fossil fuel that Europe does,” she says. As reporter Mike Ives observed in a Summer 2012 Earth Island Journal feature, China is “the globe’s number one carbon dioxide emitter.”

In effect, Jing is asking: “what price modernization?” while probing what the costs of rising living standards are when they come at the expense of environmental degradation. The journalist says that on waking up each morning she checks the air quality to determine the rest of her day. Her little girl often stares out the window of their Beijing high rise, tapping the windows to signal she wants to go outside, but the city’s so smoggy Chai is often too anxious to let her.

Edward Avol, a University of Southern California professor of clinical medicine and expert on respiratory health, air pollution, and the public health impacts of traffic, tells Jing that children living in cleaner places grow up faster and healthier. An onscreen sample white air filter is completely darkened by black carbon within a day, as Jing laments that China’s smog “drifts above us like a ghost.

”A cartoon visualizes how the human immune, cardiovascular, respiratory, and pulmonary systems are broken down by pollution with every breath individuals take, causing 500,000 people per year to prematurely die. Animated PM2.5 — particles less than 2.5 micrometers in diameter, which are called “fine” particles — are depicted entering and wreaking havoc upon human lungs.

Among the eco-culprits Jing uncovers, is coal, which China uses more of and is more reliant on than other industrialized nations. To examine the costs of coal, she uses news clips of an extremely sooty London during 1952’s “The Great Smog,” wherein 12,000 people reportedly died due to air pollution. The filmmaker visits Britain and reports that the UK’s reliance on coal now has greatly diminished. Furthermore, like other countries such as Germany, their coal currently used for energy consumption is washed. Washing coal is one of the many practices Jing advocates China should adapt to cut down on air pollution levels.

Other offenders, of course, include diesel and gas-consuming trucks and automobiles. Jing cites the following statistics: Beijing has 5 million cars, used by 34 percent of commuters. On the other hand, in Tokyo, only 6 percent of the workforce uses private vehicles to commute to work, while the rest primarily use mass transit. Most Chinese cars have not installed basic air pollution-mitigating devices. She argues simple, practical, cost-efficient measures can be taken to offset this and other forms of pollution, including installing gas vapor recovery equipment, smoke filtering devices, and soot purifiers.

Under the Dome is arguably at its best when it lays out the big picture, holding the petrochemical industry and its government collaborators accountable. Jing bravely proclaims: “Petroleum companies around the world will try to protect the interests of their industry. That’s the nature of a corporation.” She questions why “ fuel quality standards in China set by the oil industry?” when it’s not the case in other nations.

In order to attain the “blue sky” Jing yearns for her child to see, China will, the film states, have to cut its emissions by 50 percent.

Overall, one of Jing’s most compelling arguments is the lack of relevant regulations, and lax enforcement of those that do exist by a purportedly socialist government that’s supposed to operate in the interest of the masses. Under the Dome contends that China’s Ministry of Environmental Protection is, to paraphrase Chairman Mao, a “toothless tiger.” With a withering phrase that could make Marx turn in his grave, Jing sums up her bold polemic by claiming the root of China’s pollution evil is: “The stink of money.”

In addition to the aforementioned devices and granting the environment ministry more power to regulate and enforce eco-rules, Jing calls for greater “public participation” in the form of “citizen lawsuits… boycotts… tweets… participating in public commenting.” (As Ives previously reported, China already has a pretty active environmental movement with “roughly 3,000 registered environmental NGOs,” and another “estimated 3,000 NGO-like environmental groups… that never bother to fill out official NGO paperwork.”)

Western environmentalists will find much to admire in Jing i’s no-holds-barred anti-pollution manifesto, which she delivers smoothly and compassionately, but not stridently. (She appears to speak at a rapid-fire clip, which may make reading Under the Dome’s subtitles a bit challenging) However, Western eco-campaigners may also be left scratching their heads as the gallivanting correspondent visits LA and London, holding them up as viable pollution-reducing examples for the Chinese government and citizenry to emulate.

For example, Jing depicts and touts carbon filter inspections of trucks at Long Beach Harbor, LA. But as Angeleno environmentalists well know, the 710 Freeway corridor is infamous as a major source of regional pollution. And Jing’s call for “opening up markets” as an alternative to the ills of state-owned, subsidized monopolies may also concern Westerners tired of conservatives’ “invisible hand of the market” mantra.

Having said this, Jing’s remarkable documentary — made and presented by an impassioned, well-informed mother propelled by anxiety over her young daughter’s future world — is a must-see film. According to Ives’ EIJ story, documentaries such as anti-big dam films have previously played a role in China’s evolving environmentalist movement. Activist Shi Lihong told Ives: “‘we realized that our strength lies in the image… Making nature-advocacy films ‘is the best way to combine our expertise with our passion.’” To paraphrase Mao again: “Political power grows out of the barrel of a camera.”

The Chinese government should lift its “Great Firewall,” allowing the nation’s viewers to watch Under the Dome online and not persecute Chai Jing. Like Chelsea Manning, Edward Snowden, and other heroic US truth-tellers, Jing does not deserve to be punished, but rather celebrated, for standing up and speaking out about the wild, wild East’s inconvenient truths.

View an English language subtitled version of Under the Dome below.