There’s a clear connection between this week’s attempted coup and a decades-old conflict over federal control of public land in the American West.
Maureen Nandini Mitra

Wednesday’s criminal attack on the US Capitol by a mob of right-wing extremists egged on by a sitting president was eerily familiar to many in the environmental movement who have been closely following some of these groups’ assaults on public lands in recent years, including the 2016 armed occupation of the Malheur Wildlife Refuge.

Many of the extremist and militia outfits that participated in the January 6 armed insurrection against our democracy, including the Oath Keepers and III Percenters, are the same ones that have targeted national forests, parks, monuments, and wildlife refuges in the West to advance their anti-government beliefs. Photo by Tim Aubry / Greenpeace

“You can draw a straight line from the Bundy Ranch standoff and Malheur takeover to what happened in Washington,” Aaron Weiss, deputy director of the Center for Western Priorities, told the Journal yesterday. He pointed out that many of the extremist and militia outfits that participated in the January 6 armed insurrection against our democracy, including the Oath Keepers and III Percenters, are the same ones that have targeted national forests, parks, monuments, and wildlife refuges in the West to advance their anti-government beliefs.

For instance, Stewart Rhodes, the founder and leader of the Oath Keepers who has led multiple armed standoffs with public lands managers, was present at the Capitol riot.

For those who may not recall the Malheur occupation, on January 2, 2016, an armed group of far-right extremists seized and occupied the headquarters of the Malheur National Wildlife Refuge in Harney County, Oregon, in a violent flare-up of a decades-old conflict over federal control of public land in the Western United States. The occupation lasted for 41 days until the FBI finally flushed out the final four holdouts on February 11, 2016. The saga resulted in the death of a rancher named LaVoy Finicum, who was shot and killed by the FBI during a face off on a highway on January 26, 2016. Some have criticized law enforcement’s soft handling of White extremist groups, but the events at Malheur spurred right-wing sympathies for the occupiers. In 2018, Trump pardoned the ranchers, Dwight and Steven Hammond, whose imprisonment on arson convictions had sparked the occupation.

Cliven and Ammon Bundy at a talk in Arizona in 2014, the same year as the Bundy Ranch standoff, an armed confrontation between the Bundys, anti-government militia, and federal agents who had come to round up Bundy’s cows that were illegally grazing on federal land. Photo by Gage Skidmore. 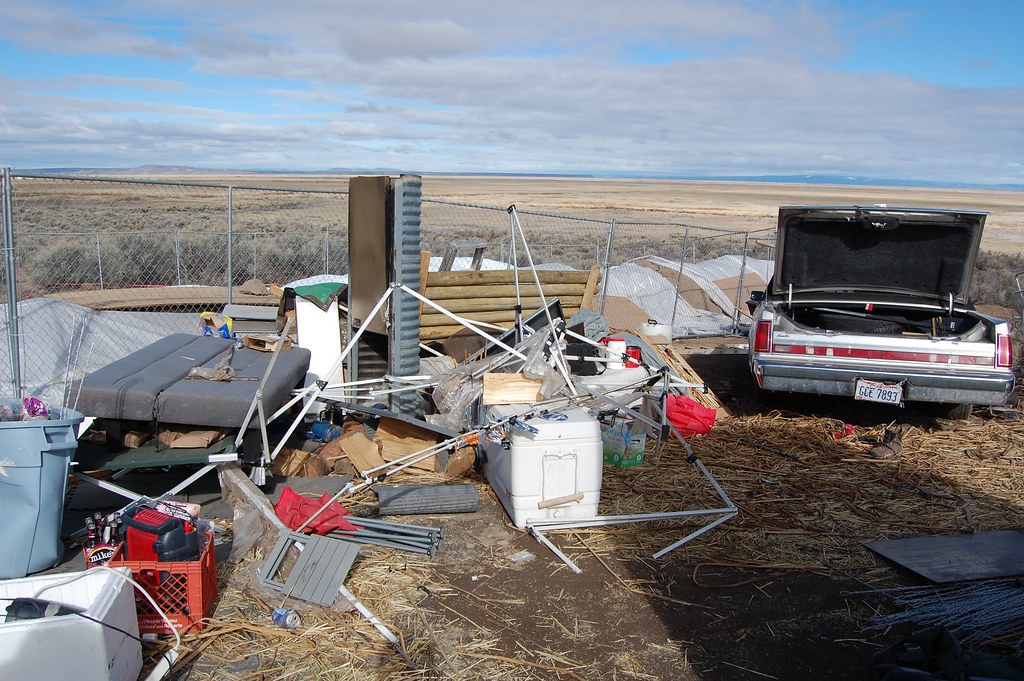 After the surrender of the last militants at Malheur, the FBI found a collection of firearms and explosives inside the refuge, safes that had been broken into, with money, cameras, and computers missing, as well as badly damaged tribal artifacts. Photo courtesy of USFWS - Pacific Region.

The Malheur occupation was a follow-up to the 2014 Bundy Ranch standoff , an armed confrontation between rancher Cliven Bundy, anti-government militia, and federal agents who had come to round up Bundy’s cows that were illegally grazing on federal land. The Bundys have withheld more than $1 million in grazing fees for their use of federal land. In 2018, a federal judge dismissed all charges against Bundy and two of his sons, Ammon and Ryan.

There have been several other violent clashes and standoffs between right wing militia and national public lands managers, Wiess said, including at the Sugar Pine Mine in Oregon and the White Hope Mine in Montana.

What empowers these groups all the more is that they have often been backed by local politicians who share similar ideologies. Notably, a newly elected West Virginia lawmaker was among the mob at Capitol, as was the mayor of Newkirk, Oklahoma, who told The New York Times, “We had enough people, we could have tore that building down brick by brick.” Angelita Sanchez, the spokeswoman for Timber Unity, the group that spurred the Republican walkout from the Oregon Legislature during negotiations on a cap-and-trade bill in 2019, was also in the crowd. Sanchez was recently elected to the city council of the Sweet Home, Oregon, and is slated to be sworn in next week.

“We have been watching these folks for the past four years being coddled not just by Trump but by [Department of Interior Secretary] David Bernhardt as well,” Weiss said. “Just this past New Year’s Eve, Bernhardt moved to reinstate the grazing privilege of the Hammond family to the very lands they razed… Now the president emboldened these groups to such an extent that they thought it was proper to invade the Capitol.”

The Center for Western Priorities’ 2016 report, Going to Extremes, which highlights the explicit ties between anti-public lands extremists and mainstream politicians in the West, offers a chilling, prescient analysis of what, aside from Trump himself, drove Wednesday’s failed coup at the Capitol:
If we needed to look further, on Wednesday afternoon, Cliven Bundy took to Facebook with this exhortation: “Today President Trump had hundreds of thousands of people and he pointed the way — pointed towards congress (sic) and nodded his head go get the job done. We the People did clear the chambers of Congress and 100,000 should have spent the night in the halls and 100,000 should have protected them.”

“These far right-wing organizations are not operating in a vacuum. To the contrary, the armed insurrection in Oregon and Nevada before — led by Ammon Bundy and the Bundy family — share the same foundations as land transfer schemes promoted by some elected leaders in states throughout the West. Both rely upon a philosophy based in vehement anti-government ideologies, both have connections to organizations that espouse armed resistance, both employ pseudo-legal theories to justify their actions, and both use scholarly support from conspiracy theorists and discredited academics.” (Emphasis added.)

“The Trump administration encouraged the militant, racist, land-grabbers who stormed the Malheur Refuge, so for years this has emboldened many of the same groups in the mob that rioted in the Capitol,” David Phillips, executive director of Earth Island, which publishes the Journal, said in a statement. “It’s high time that this domestic terrorism is confronted head-on.”

Weiss, and many other environmental and racial justice activists are also concerned that there’s “a whole other layer” of dangerous implications to Wednesday’s attack given the explicitly racist makeup of the mob as well as how it was handled by law enforcement, which also spoke of racial and right-wing bias.

“We are about to have, for the first time in US history, a Native American Interior Secretary in charge of [federal] public lands that these folks believe belong to them, which means things are going to get more difficult,” Wiess said. “I’m not worried about Deb Haaland’s safety (she will have a strong security detail),” he added, “but I’m worried about the safely of the public land employees — the frontline workers, the rangers, the scientists… They are the ones who will be at risk, as will local conservation groups that work with the Bureau of Land Management.”

Others environmental groups are also worried about the implications of the insurrection in terms of law enforcement — in other words, an expansion of the police state — and further restriction on citizens’, including environmental activists’, constitutionally protected right to peaceful protest.

“We are also deeply concerned about the police response, especially the difference between how the police treated these White supremacists, who were violent, and how they have treated the Black Lives Matter protestors,” Greenpeace Democracy Campaign Director Folabi Olagbaju told the Journal yesterday.

Greenpeace is calling on Congress to pass the For the People Act (HR1), the John Lewis Voting Rights Act (HR4), and DC Statehood (HR51). “We strongly believe these are the kind of reforms that will strengthen our path towards a more green, just, and equitable planet,” Olagbaju said.

Greenpeace, Sierra Club, and several other environmental groups have joined in the demand for Trump’s immediate ouster, either through the invocation of the 25th Amendment or impeachment. They are also asking for the arrest and prosecution of those who invaded Congress, the expulsion or censure of every elected officials who encouraged the attempted coup, and a full investigation into the security response that failed to keep the Capitol safe.

“We need to be ready for what’s to come because if there are no consequences for these domestic terrorists the next few months and years are going to be dangerous,” Wiess warned.