Though I am a cultural critic who regularly covers productions with environmental themes, Hannie Rayson’s Extinction marks the first time I’ve reviewed a play with a plot that explores “the urgent need to combat manmade climate change to protect biodiversity.”

The 2015 world premiere of the award-winning Australian playwright’s drama was at the Heath Ledger Theatre in Perth. But now American and international audiences can hear Extinction —Rayson’s stage play has been adapted as an LA Theatre Works (LATW) audio production.

(LATW bills itself as “the world’s leading producer of audio theater,” and since 1974 has recorded 550-plus plays featuring top talents including Richard Dreyfuss, Ed Asner, Alfred Molina, Marsha Mason, et al, some of them before live audiences at UCLA’s James Bridges Theater.)

Extinction has a clever twist on that sixties’ slogan, “The personal is political,” which can be characterized as “the personal is ecological.”

Set Down Under, on a stormy night Harry Jewell (read by Michigan-born ​​Seamus Dever, costar of the ABC-TV series Castle) is driving on the Great Ocean Road in Victoria when he inadvertently hits an animal, which he then tries to rescue by taking it to a wildlife shelter. There, he encounters Piper Ross (Long Island-raised Sarah Drew, of Grey’s Anatomy), an American zoologist temporarily working in Australia who is volunteering at the facility. But it’s too late, as the creature’s back is broken and the shelter’s veterinarian, Andy Dixon (Darren Richardson who acted in the blockbuster Black Panther), euthanizes it.

This rattles Harry, who recognizes that the cat is a tiger quoll, an endangered species once plentiful in the region, and worries that this may be the very last one of these carnivorous marsupials. (Because the characters, with the exception of the Yankee Piper, speak in Aussie accents, at first, I thought they were saying “tiger koalas”!) Soon Harry visits research scientist Heather Dixon-Brown (English actress Joanne Whalley of the Netflix series Daredevil), director of the CAPE Institute, and offers $2 million-plus to finance a conservation project to help preserve tiger quolls — if they still exist. And Harry wants Piper to be part of the program. 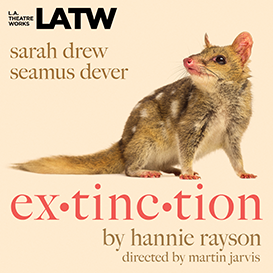 However, as in life, nothing is black and white. Harry’s donation would be a boon to the financially strapped Institute — but this is a classic Faustian bargain. It turns out that Harry is the managing director of Powerhouse Mining, which is licensed to explore for coal in the Otway region of southwestern Victoria, that could do irreparable harm to the flora and fauna in this habitat, including to any tiger quolls that may be left in this area.

Complications ensue — should Heather accept the funding? Andy, who is her brother and an environmental absolutist, argues that the contribution would be tainted, tantamount to blood money, and acceptance of it from an extractive industry is selling out. Harry describes Andy as “the type of greenie who’s always saying ‘no,’” while Andy nicknames Harry “Mr. Evil” because of his corporate ties.

In addition to its thorny ethical dilemmas, Extinction’s romantic relationships are likewise complicated. Piper has been dating the prickly Andy. But when Harry — who is in the process of getting a divorce — enters the scene, the play’s sexual interactions move into Bob & Carol & Ted & Alice territory. In addition to deciding whether she’ll return to the US or remain in Australia, Piper must choose between Andy or Harry —w ho, also has a tryst with her supervisor, Heather. Amidst their quoll quest, the chickens come home to roost, as all of these conflicts of interest and entanglements eventually ensnare the characters.

The 99-minute-long audio play dramatizes pressing, timely environmental issues by blending romance, irony, moral compromise, and human foibles with themes that ask the big questions in an age of climate change. In the process, Rayson’s two act play paints a portrait of human nature — and nature itself. The dramatis personae and plot are nuanced and multi-dimensional and the play advances some important ideas, including pragmatism versus idealism, jobs versus conservation, and what “survival of the fittest” means in the twenty-first century. At one point, Heather ponders whether Harry will “mine the forest to save the forest,” calling to mind that Vietnam War conundrum: “We had to burn the village to save the village.”

In addition to the voices of the four thespians, sound effects and some music enliven this play for the audio medium. Although none of the three actors portraying Australians are actually from the land Down Under, they had this former Radio Australia stringer, whose daughter now lives in Brisbane, fooled. Extinction is helmed by English actor/director Martin Jarvis and is, according to press notes, “part of the Alfred P. Sloan-funded Relativity Series of science-themed plays, bridging science and the arts in the modern world.”

Starting January 31, Extinction can be heard as a digital download at Digital-Season | LATW. Later in 2021, Extinction will air on LATW’s weekly syndicated radio theater series broadcast on public radio stations across the US.