Using off-the-shelf products labeled free of these chemicals for even three days can lead to a big drop in exposure levels, study shows
Elizabeth Grossman

Using cosmetics and personal care products that don’t contain certain hormone-disrupting ingredients for only three days, women can significantly reduce their exposure to these chemicals, according to a study published today in Environmental Health Perspectives. 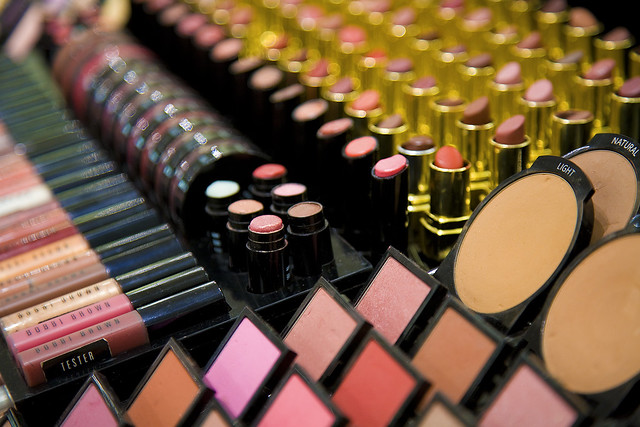 Photo by Envios/FlickrFour well-known endocrine disrupters — phthalates, parabens, triclosan, and oxybenzone — are widely used in personal care products and cosmetics. The FDA doesn’t test cosmetics ingredients before they reach store shelves. A new bill is seeking to change that.

The study by researchers at the University of California Berkeley, California Department of Public Health, and Clinica de Salud del Valle de Salinas, measured levels of four commonly used cosmetics ingredients known to be endocrine disrupters —phthalates, parabens, triclosan, and oxybenzone — in 100 Latina teens before and after they began to use off-the shelf products labeled as free of these ingredients.

These chemicals are widely used in personal care products and cosmetics, including sunscreens, soaps, hair products, and perfume. All have been shown in laboratory studies to interfere with the endocrine system, which produces hormones that help regulate development, reproduction, and metabolism as well as cardiovascular, immune, and neurological system functions. This is the first such study to show that simply by using products labeled to be free of these chemicals, personal exposure levels can be significantly reduced.

“Because women are the primary consumers of many personal care products, they may be disproportionately exposed to these chemicals,” said study lead author Kim Harley, associate director of the UC Berkeley Center for Environmental Research and Children’s Health. “Teen girls may be at particular risk since it’s a time of rapid reproductive development, and research has suggested that they use more personal care products per day than the average adult woman.”

“Research says a woman or girl will use 12 products per day, and I wanted to know what I was putting into my body and also wanted to pass on what I learned in the study on to my friends,” said Carolina Mundo, a 19-year old UC Berkeley freshman who was both a study participant and research assistant.

For the study, the researchers recruited teens, of ages 14 to19 and gave them replacement toiletries and makeup products to use for three days. Products came from local stores and from among mainstream and less expensive brands, as we “wanted to make this as sustainable as possible,” Harley explained. Levels of the target chemicals were measured in the participants’ urine before and after three days of using the alternate products.

Most of the girls reported wearing makeup and using perfume regularly. Nearly all used moisturizer – and the levels of the study’s target chemicals measured before use of the alternate products reflected this use. When the same chemicals were measured at the end of the three days, all had dropped notably.

Diethyl phthalate commonly used in fragrances decreased by 27 percent, while levels of triclosan, used as an antibacterial agent in soaps and some toothpastes, and of oxybenzone, that’s used in many sunscreens, dropped 36 percent. The largest decreases seen were of methyl and propyl paraben, which are used as preservatives that fell 44 and 45 percent respectively.

Somewhat surprisingly, the levels of two less common parabens — ethyl and butyl paraben — increased during the study period. These levels were quite low and detected in only about half the girls in the study, said Harley. “We don’t know where they came from,” she said. But one thought is that they may have been in products but hadn’t been included in the ingredients list or where present in the products as the result of accidental contamination during production, she explained.

“The big picture for me is that we measured levels of endocrine disrupting chemicals in teenage girls’ bodies,” said Harley. “More than 90 percent of the girls had detectable levels of these chemicals in their bodies when they came in. When we asked them to stop using their regular products even for three days, we were able to reduce levels.”

Mundo said as a result of the study she was going to switch the cosmetics and personal hygiene products she uses. “It was really hard to stop using my perfume and also the deodorant my grandmother brings me from Mexico,” she said, “I’m trying not to use products with perfume and trying to use more organic makeup. And I’m using coconut oil on my hair instead of anti-frizz cream.”

Asked what she learned from the study, Mundo said that she’s now concerned that “if we keep using these products, if you’re pregnant, your baby could become pre-polluted,” as these chemicals can be passed on to the developing fetus. “My aunt was pregnant a year ago and I kept telling her not to use her regular products,” Mundo said. She said she was also surprised to learn that the US Food and Drug Administration (FDA) doesn’t really know what is in all of these products.

In that Mundo is far from alone. In polling released last week by the Mellman Group and American Viewpoint, about a third of 800 likely 2016 voters surveyed thought the federal oversight and regulation of cosmetic and personal care product ingredients is far more stringent than it is. Nearly 90 percent said they wanted stricter regulation of such products. The fact is, the FDA — the federal agency that oversees the more than 8 billion personal care and cosmetics products now sold annually in the US, knows astonishingly little about what goes into these products.

The FDA also does not specifically bar the use of substances identified as hormone disrupters, carcinogens, and reproductive or development toxicants in cosmetics or personal care products. Currently only eight substances (including several carcinogens, a lung toxicant and ozone-depleting chlorofluorocarbons) are specifically banned from these products, and apart from color additives that must FDA pre-market approval, the FDA doesn’t test cosmetics ingredients before they reach store shelves. If consumers report adverse health effects after using a cosmetic, the FDA may test the product and recommend it be taken off the market but the agency doesn’t have the authority to actually recall personal care or cosmetics products. Instead, the FDA relies on manufacturers to test ingredients and product safety before they go on the market. And the law that regulates these products, the federal Food, Drug and Cosmetics Act is nearly 80 years old.

A bipartisan bill introduced by senators Dianne Feinstein and Susan Collins aims to close some of these gaps. Called the Personal Care Products Safety Act (S. 1014), the bill would strengthen current regulation by requiring the FDA to assess the safety of chemicals being used in personal care products and by giving the agency the authority to ban or restrict ingredients that were found to be hazardous. The bill also contains provisions that would allow the FDA to request disclosure of ingredients in fragrances —which can currently be withheld as proprietary trade secrets — and would require companies to report to the FDA any serious adverse health events associated with their products.

The bill currently has the support of many cosmetics manufacturers, including Procter & Gamble, L’Oreal, Revlon, and Johnson & Johnson, as well as the Personal Care Products Council and a number of environmental and health groups, including the Environmental Working Group, Endocrine Society, and the March of Dimes. A hearing on the legislation is expected later this spring.

But not all environmental health advocates are supporting the bill as now drafted. “It’s a really important piece of legislation and noteworthy because it is bipartisan,” said Janet Nudelman, co-founder of the Campaign for Safe Cosmetics, But, she said, her group would like to see the ultimate legislation strengthened to include full disclosure of fragrance ingredients as well as provisions to ensure even stronger safety standards and better access to ingredient and safety data throughout the supply chain.

“Whatever reform takes place, we want to make sure it’s as health protective and as meaningful as possible,” said Nudelman, who is also the program and policy director of the Breast Cancer Fund. The system now in place, she explained “has resulted in the headlines we see everyday – about formaldehyde, hormone disrupters, and lead in lipstick.”