This article is based on an interview with Laura Owen Sanderson on the Transnatural Perspectives Podcast hosted by Josh Bennett. Listen to the full episode here.

From a bird’s-eye view of a lake on a winter day in Snowdonia, Wales, a tiny red dot steadily moves across the water. The next shot in this scene in a short film called Hydrotherapy, drops to water level, revealing the face of Laura Owen Sanderson, a Welsh wild swimmer and conservationist, as she glides across the frame. Sanderson is often found, but rarely seen, in the remote waterways of North Wales. She’s usually invisible in the water, her stark black hair and matching wetsuit enabling her to blend in and become one with the landscape. On the chilly overcast day this documentary was shot, the director suggested a red swim cap to counteract Sanderson’s disappearing act.

“Swimming in nature strips backs and simplifies the material world,” says Sanderson, who spent her youth hiking Wales’ Snowdonia National Park and surfing some of the United Kingdom’s best shorebreaks located just a stone’s throw from her childhood home.

Sanderson’s hydrotherapy had her spending more time in natural bodies of water, and with that came shocking observations of plastic pollution, even in the most remote areas. Photos by The Friction Collective.

Raised in a family of environmental scientists, Sanderson chose a different route, pursuing studies in the arts and education. She moved onto a successful career as a teacher trainer, but her career came at a cost. Over time, her local wilderness became foreign. She became a single parent, and her busy life left little space for outdoor pursuits. Then, her physical health deteriorated.

“I carried on working because I felt a great sense of expectation on me and guilt,” Sanderson says in the opening sequence of Hydrotherapy. “I had to get the work finished even though I’d felt really, really ill. Everyone else had left and gone home but I decided to stay and work and work, and I worked myself into the ground.”

Her strenuous lifestyle eventually landed Sanderson in the emergency room and a diagnosis of fibromyalgia, a chronic and debilitating musculoskeletal condition that Sanderson describes as “hardly being able to walk across the room.” She visited multiple doctors with little success, until one of them eventually asked her if she’d ever tried cold showers to reduce her inflammation.

Hesitant to voluntarily stand directly under a cold shower but willing to try anything to ease her symptoms, Sanderson turned to the familiar coastline where she had once loved to surf. She started swimming routinely in the frigid ocean water. Results were immediate, she says.

“Straight away it worked! I think it’s the salt in the water, it just really eased up the muscles.” Soon, Sanderson began hiking to search out more remote locations like mountain lakes and rivers in the nearby national park. “Once you start, you get quite addicted to it,” she says. 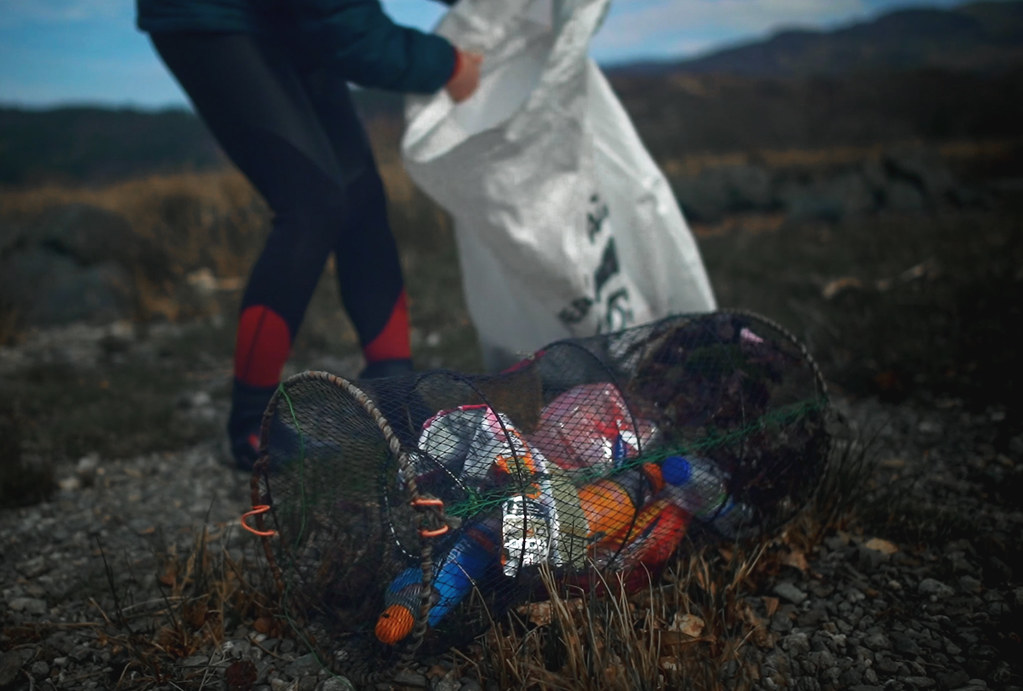 Her journey from personal struggles with physical and mental health draws an uncanny parallel with the stress that modern society puts on the ecosystem. 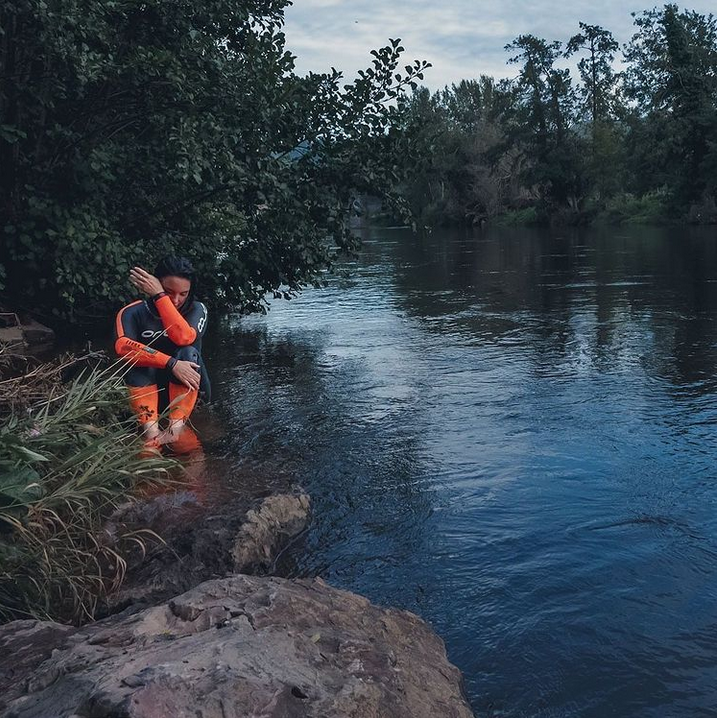 Sanderson breaks from a Source to Sea swim on a bank along the River Usk. “Swimming in nature strips backs and simplifies the material world,” she says.

Sanderson’s hydrotherapy had her spending more time in natural bodies of water, and with that came shocking observations of plastic pollution, even in the most remote areas. Sanderson eventually began organizing beach and waterway cleanups, which, she notes, “were getting upwards of 80 people every time at a local beach.”

Around that time, a study on microplastics pollution emerged from the lab of ecologist Christian Dunn of the nearby Bangor University. The study reported local water samples testing as high as 76.9 pieces of plastic per liter.

With this news, Sanderson reconsidered the impact of her cleanups. “I thought that we can’t keep doing this,” she says. “It’s great for highlighting the issue, but the tap is still on and you can’t keep cleaning up when it’s still pouring out.” Instead, Sanderson thought that her advocacy for a clean ocean should cut to the source.

In 2018, Sanderson founded We Swim Wild in collaboration with Dunn. The organization’s mission is to protect wild waters through adventure, education, campaigning, and scientific research. We Swim Wild coordinates a wide array of citizen science and environmental education activities, retreats, swimming courses, and eco-tourism experiences that integrate the gathering of scientific data. The goal, Sanderson explains, is to “make real changes in the UK by bringing science into the everyday” so that “people can take care of the places where they swim and visit.”

In 2019, Sanderson started an initiative called Source to Sea, an epic journey spanning 1,000 kilometers of waterways in all 15 of the UK’s national parks. Along the way, she will collect samples that will be sent to the lab, where Dunn is investigating the impact of microplastics on the health of humans and ecosystems at large.

The main objective of the project is to evaluate so-called “safe” levels of microplastics and determine how appropriate removal and mitigation processes can be implemented. Eventually, Sanderson plans to launch a national awareness campaign — accompanied by a documentary film of the research expedition and citizen science education projects in schools — to put data-based pressure on legislators to pass a ban on plastic usage in national parks.

The massive project would not be possible without the meticulous data collection done by a crew of about 100 volunteer citizen scientists. Appropriately dubbed “The Waterloggers,” this motley crew of everyday wild swimmers, artists, activists, and researchers is motivated, according to Sanderson, “to protect the place they love and find out what’s in it.” The Source to Sea project is considered the most comprehensive study on microplastics pollution in the UK to date.

Sanderson’s new initiative, Wild Soul Swim, which she describes as “tourism with a purpose,” provides guided outdoor educational experiences and wellness retreats that focus on “reconnecting with nature, wild waters, and rejuvenating our wild spirit.” Initiatives like this continue help fund future projects like Source to Sea.

Sanderson’s journey from personal struggles with physical and mental health draws an uncanny parallel with the stress that modern society puts on the ecosystem. Somewhere between personal well-being and the well-being of the Earth, Sanderson found herself at an intersection that ultimately connected her needs with the needs of the world. “I wasn’t afraid to die but more afraid I hadn’t made the most of every opportunity,” she says. “I was waiting for a day that might never come when you retire or when you’re thin enough or when the kids have grown up There was a sudden realization that that day might never come.”

Originally from Florida, Josh Bennett is an environmental educator, journalist, and outdoor guide based in Norway with a focus on communicating for social, cultural and ecological sustainability via learning experiences. More info at www.transnaturalperspectives.com