Keep your hands off those strawberries folks! Unless they are organic that is. Apparently nearly all conventionally grown strawberry samples tested by federal officials had detectable pesticide residues, and some had traces of as many as 17 different pesticides lingering around. 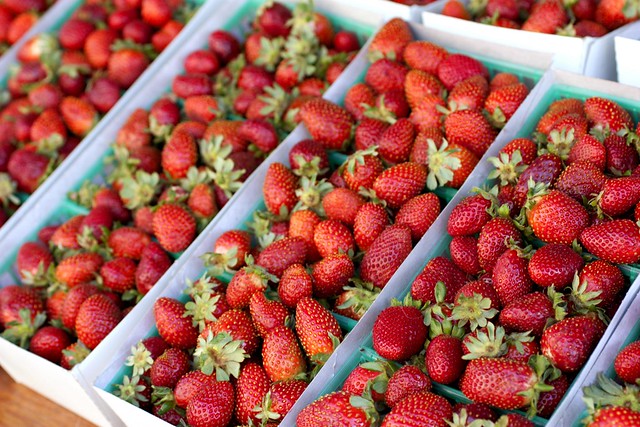 Photo by bionicgrrrl In California, where most US strawberries are grown, each acre of strawberry field is treated with a whopping 300 pounds of pesticides.

With summer and its bounty of luscious fruits and vegetables just around the corner, the Environmental Working Group has come out with its annual “Dirty Dozen” list of produce that are heavily contaminated with pesticides, and this year strawberries get top billing on the list of foods to avoid.

Once a seasonal crop, strawberries are now grown almost all year long with the help of heavy doses of pesticides. In California, where most US strawberries are grown, each acre of strawberry field is treated with a whopping 300 pounds of pesticides. Of this, more than 60 pounds are conventional chemicals that may leave post-harvest residues. Most of the rest are fumigants — volatile poison gases that can drift into nearby schools and neighborhoods.

EWG’s update of its “Shopper’s Guide to Pesticides in Produce” reports that 98 percent of conventional strawberry samples tested by the US Department of Agriculture had detectable pesticide residues. Of those, 40 percent had residues of 10 or more pesticides. Some of the chemicals detected on strawberries are relatively benign, but others are linked to cancer, reproductive and developmental damage, hormone disruption, and neurological problems.

“This is the first year that strawberries topped the list, and I was surprised by how heavily contaminated they were,” Sonya Lunder, EWG senior analyst, told EIJ. “What’s worse is that the residues are well within the limits of laws regulating pesticides in food in this country. Most people don’t even know that there are pesticide residues in their produce that stays on even after washing.”

In total, the EWG report — which is based on results of more than 35,200 produce samples tested by the USDA and the Food and Drug Administration — found 146 different pesticides on fruit and vegetable samples tested in 2014. These are residues that remain on produce even after items are washed and in some cases peeled.

Other produce on the Dirty Dozen list includes apples, nectarines, peaches, celery, grapes, cherries, spinach, tomatoes, sweet bell peppers, cherry tomatoes, and cucumbers. The report found a single grape sample and a sweet bell pepper sample contained 15 pesticides each. And though potatoes didn’t make it to the list, the report notes that the average potato had more pesticides by weight than any other produce.

The report also included a plus category to highlight two types of food that contain trace levels of highly hazardous pesticides — leafy greens like kale and collard greens, and hot peppers. These veggies didn’t meet the traditional Dirty Dozen ranking criteria but were frequently found to be contaminated with insecticides toxic to the human nervous system. Among the chemicals at issue are organophosphate and carbamate insecticides. These are no longer detected widely on other produce, either because of binding legal restrictions or voluntary phase-outs.

“The EPA needs to revise the levels of residues allowed on produce to reflect new research that shows that these chemicals are harmful even in small doses, especially for young children,” Lunder says.

Recent studies of insecticides used on some fruits and vegetables, including strawberries, found that children exposed to high levels were at greater risk of impaired intelligence and ADHD. Research also indicates that the levels of pesticides in the bodies of elementary school children peaked during the summer, when they ate the most fresh produce. But after just five days on an organic diet, they were essentially pesticide-free.

“[On] balance we know that eating fruits and veggies is good for health, but if you want to limit exposure to pesticides, we recommend buying organic versions of these vegetables,” Lunder says. The produce items on the Dirty Dozen list usually don’t change too much, she says, so it makes for a good guide of which fruits and vegetables we should buy organic.

“I buy organic as much as I can because of the totality of the issue, given that the use of pesticides is bad for the soil, bad for our health, and bad for farmworkers,” Lunder says. But, she adds, there are also some conventionally grown produce are safe to eat. Like vegetables that form the brassicaceae family — such as cauliflower, cabbage, garden cress, bok choy, broccoli, brussels sprouts, and onions and garlic — that are naturally resistant to pests and therefore aren’t sprayed with as much pesticides.