The Big Island of Hawaii is often in the news because of the active Kilauea volcano. However, an eruption of another sort at the dormant 13,796 foot-high Mauna Kea is thrusting Hawaii back into the headlines. This explosion of activism has been triggered not by TNT, but by “TMT,” the proposed Thirty Meter Telescope, the Northern Hemisphere’s largest, most advanced optical telescope, which is slated to be built on the summit of the Aloha State’s highest peak. This 184 foot-tall, 18 story-high, eight acre, $1.4 billion construction project has sparked a wave of occupations and protests by Native Hawaiians, environmentalists, and their allies, stretching from Hawaii to California.

Photo provided by TMT Observatory Corp An artist’s rendition of the proposed TMT project (located in the lower left-hand corner), as well as existing telescopes on Mauna Kea.

Opponents have flocked to Mauna Kea to stop construction of the telescope and adjacent conservatory, staging acts of civil disobedience and causing a PR nightmare that has taken the TMT International Observatory LLC, a multinational conglomerate, by surprise. Last October, protesters disrupted the star-crossed project’s groundbreaking ceremony atop Mauna Kea. Across the Pacific, demonstrators gathered in Palo Alto, CA, outside the Gordon and Betty Moore Foundation, which has pledged $200 million to fund the controversial project.

So far, the protests have been successful. “[As of] April 21, we are in ‘stand down,’” Sandra Dawson, TMT Manager of Hawaii Community Affairs, said via a conference call to Hilo, Hawaii (with a Honolulu-based Becker Communications publicist on the line). “TMT has agreed to halt construction temporarily while stakeholders are talking about different ideas for moving forward…. Governor [David] Hige asked if we would halt construction for a period and we agreed. Then we met with him again and we said we’d continue the construction halt for a period of time while people pursued conversations.” According to Dawson, only one-and-a-half days of construction have been done since the project started in April.

It is unclear how long these tête-à-têtes between various concerned parties will continue — the postponement is for an unspecified amount of time. On April 17, Governor Hige, a Democrat, issued a statement asserting, “The TMT team is legally entitled to use its discretion to proceed with construction.” 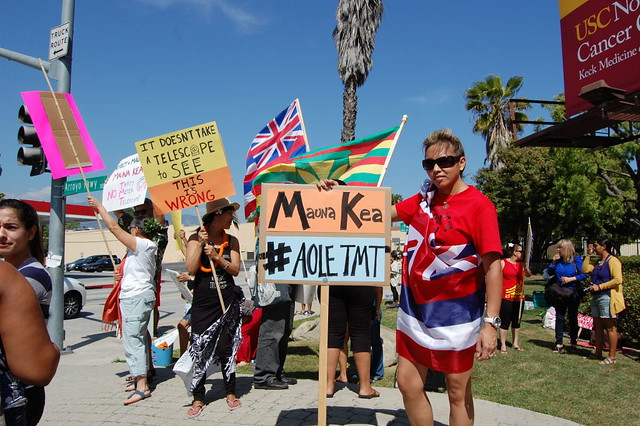 Photo by Ed RampellOpponents of the Mauna Kea telescope project protest outside of TMT offices.

Interviewed by phone on the Big Island, Kealoha Pisciotta, a Native religious practitioner and spokeswoman for the Mauna Kea activists who was raised on the Big Island, told EIJ that over 100 TMT opponents from throughout the archipelago were still occupying the mountain, operating “the ‘Aloha Checkpoint,’ at the 9,000-foot level, where they’re primarily stationed.” Since the length of this construction suspension is uncertain and up to TMT, “we cannot stand down,” maintained Pisciotta, who had just returned from meeting with Governor Hige at Oahu, presenting him with an anti-TMT petition containing 53,000 signatures and encouraging him to “drop the charges against the ‘Mauna Kea 31.’”

Pisciotta described herself as having worked in the astronomy industry for 12 years and having been involved in litigation against observatory interests for years. She indicated TMT includes entities she’s fought in the courts in the past.

On April 19, 75 demonstrators, many wearing tattoos, Aloha shirts, and flip flops, waving Hawaiian flags and signs, and reciting slogans and Polynesian chants, gathered on the four corners of the intersection outside TMT’s headquarters in Pasadena, CA, near the 110 Freeway exit.

This 30 meter-wide telescope project, which began in 2003, has become a joint effort by the Association of Canadian Universities for Research in Astronomy, the California Institute of Technology and the University of California, as well as the governments of the US, China, India, Japan, and Canada. Dawson dubbed it “the first real pan-Pacific observatory.”

The TMT conglomerate subleases land from the University of Hawaii (UH), which leases 11,000 acres on Mauna Kea from the State of Hawaii, in exchange for “observing time on some of the best telescopes in the world, somewhere between 7.5 and 15 percent of observing time on all the telescopes,” explained Dawson. The Moore Foundation’s funding started circa 2006. The state’s Board of Land and Natural Resources, which oversees state land, approved the TMT undertaking.

TMT’s purpose is to study the “Milky Way and its neighboring galaxies,” according to its website. “[TMT] will see further back in space and thus in time … within 400,000 years of the Big Bang … and get a sense of what happened when galaxies and stars were first forming,” Dawson said. “That’s very, very exciting.” She added that the telescope will also find and observe new planets and solar systems, including, perhaps, other worlds showing signs of life, as well as a black hole at the center of the Milky Way galaxy and dark matter.

Meanwhile, back on Earth, the proposed TMT project spurred opposition because of cultural and ecological concerns. According to Pasadena demonstration spokeswoman Mikilani Young, “First, we’re protecting our aina [land], Mauna Kea is the most sacred place on the Hawaiian Islands, where we believe [the pre-Christian deities] Papa and Wakea came together and made all our islands…. It’s not only about protecting Mauna Kea but sacred lands around the world.” Pisciotta shared similar concerns. “TMT is located right in a ring of cultural shrines,” she said. “Mauna Kea is a burial ground.”

Locals also assert that UH has poorly managed previous telescope projects. “UH was allowed essentially control of the Mauna Kea area. They have been allowing the building of these telescopes and there have been a number of court cases” said Rosa Rivera Furumato, a professor of Chicano Studies at California State University, Northridge, who identified herself as a US-born Chicana indigenous person of Yaqui and Cora ancestry, and part of Young’s Hula Halau (traditional Hawaiian dance school and troupe).

“UH has not done a good job with it. For example, there’s runoff there, waste from [the] construction site, so there’s destruction of … sacred family altars and sites…. Some of the most high-ranking ancients of Hawaii are buried up there. There’s been all this desecration and they have not consulted very well with Native Hawaiians to be able to share use of that place. Now, the idea of building this additional observatory is just the last straw…. You don’t have to be indigenous to understand this issue — we need to take care of our sacred sites.”

But Dawson disagrees. “On the TMT site, it was chosen, specifically, because there are no archaeological artifacts there … no heiaus [pre-Christian temples], no burials — it’s a basalt lava field,” she said. “It’s been looked at very closely and determined by the State Historic Preservation [Division] and others, no, there is nothing like that on our site.” However, Dawson demurred from saying whether or not there were culturally significant sites elsewhere at the summit, admitting, “I’m not the expert on Mauna Kea” outside the TMT site.

Local communities are also worried about potential impacts to the ecosystem on islands that have already been beset by overdevelopment. “Environmentally it will affect our islands. There are aquifers on the bottom — no one can 100 percent guarantee it won’t destroy the environment. What little we have we don’t want destroyed,” said Young, who is originally from Honolulu, but now lives in LA’s San Fernando Valley and is a kumu hula (Hawaiian dance school teacher/leader). “They’re saying they’re going to be building containers underneath to store chemicals. If anybody knows Hawaii, we have earthquakes and that’s where [volcano goddess] Madame Pele lives. If she decides to erupt, nobody can 100 percent guarantee those [containers] won’t be destroyed and affect the rest of the island”

Mikilani’s wife, Nanea Young, added, “It may seep into the ground and affect the whole island.” According to a leaflet by Kahea, the Hawaiian-Environmental Alliance, disbursed at the rally these containers will be “5,000 gallon underground tanks for waste storage, including hazardous chemicals” and “construction will impact fragile habitats of native plants and animals,” As an example, Pasadena protesters cited the endangered silversword flower.

Waving a sign in front of TMT’s HQ, Moka Kaehuaea added Mauna Kea “is an essential part of the ecosystem because that’s where lots of the snow is gathered and it trickles down and is kind of feeding the rest of the mountain. Definitely, if you’re going to dig into the mountain, there’s potential of affecting the groundwater below.”

Dawson disputed these contentions, asserting that there are no silverswords or other endangered species on the TMT site, and that, “In TMT’s Environmental Impact Statement, hydrologists said there’s no way [any water] from the top of Mauna Kea gets into any aquifer.” She added that Mauna Kea was specially selected “for its clear skys and stable air,” and that activists haven’t proposed any other locations.

In addition to potential environmental impacts of the TMT telescope, activists say there are several other observatories on the mountain that have been decommissioned, but not yet removed, and which continue to impact the land.

Dawson stated that TMT is making major contributions to the state and Big Island economy, including paying $1 million a year lease rent; $1 million a year for education; plus $1 million a year to develop workers for high-tech jobs, including IT, engineers and astronomers, for TMT and other observatories. TMT also claims that during the 8-10 year building period, up to 300 construction jobs will be created, and that once opened the observatory will employ 140 people. Dawson added that while there is currently a standstill on construction, TMT will proceed with its contentious plans.

TMT opponents insist they are not “anti-science.” Since time immemorial, ancient Polynesians have been superb stargazers, charting their course across the Pacific by following the constellations. Contemporary Hawaiians, such as Hokule’a voyaging canoe navigator Nainoa Thompson, continue this scientific tradition. And although Hawaiians are world-renowned for their hospitable “aloha spirit,” indigenous activists remain steadfast in their opposition to TMT, demanding that it leave Mauna Kea. Demonstrations will continue, including a protest during an April 29 meeting at Cal Tech in LA. Kealoha Pisciotta declared, “The protests are going global.”

As Professor Furumoto put it, “Environmentalists should be concerned because they care about the Earth, and I hope they also care about humanity, about sacred sites. But even if all they cared about was that little insect and the silversword, then that would be a cool reason for them to want to protect Mauna Kea.”