Southern California Conservationists Are Tied in a Long Battle With Crayfish

The invaders began arriving in Southern California half a century ago. They lurk in ponds, slower streams, and creeks in the Santa Monica Mountains, prevailing over all the watershed area. A kind of ubiquitous omnivore, red swamp crayfish (procambarus clarkii) eat anything, ranging from plants to snails to amphibian and insect larvae. Experts say the invaders, originally from South Central United States and northeastern Mexico, could potentially choke out the ecosystem for every other species that calls Los Angeles County’s Malibu Creek home. 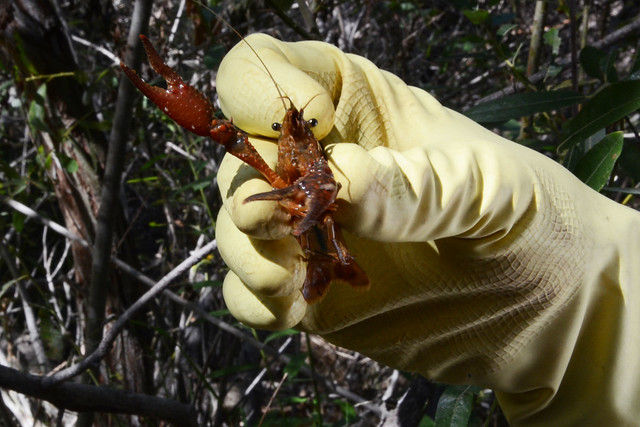 Photo by Yao LiIntroduced to California in the 1960s as bait for sport fishing, red swamp crayfish (procambarus clarkii) eat anything, ranging from plants to snails to amphibian and insect larvae.

Annie Mitoma, a student worker at Pepperdine University’s volunteer center, took over the Malibu-based school’s crayfish removal program in the Autumn 2014 semester. During a field trip to Malibu Creek in October, Mitoma and the two other volunteers were accompanied by two technicians from Mountains Restoration Trust (MRT) — an organization founded 30 years ago to protect and restore the Santa Monica mountain area. In July 2014, the trust received $800,000 grant from the California Department of Fish and Wildlife to eradicate crayfish in Malibu Creek watershed by March 2017.

Within three months, with the help of more than 400 volunteers, Mountains Restoration Trust has removed about 14,400 crayfish from Medea Creek and at least another 3,000 from upper Las Virgenes Creek, both of which are part of the Malibu Creek watershed, said Kyle Troy, one of the technicians. “It is a quite promising beginning,” she said “We hope there are more volunteers come to join us.”

Troy put on the waterproof overalls and rubber boots, an outfit that made her look rather like Super Mario, waded into the stream, and picked up a minnow trap set there the day before. Inside were three crayfish, a big one and brick red colored and two small ones in drab grey. She pinched the big one on its back lightly. Its carapace and claws were covered in bumps, and its blue veins were visible under the tail. It feebly waved its narrow and long pincers in the air.

“Female, seven. Male, three. Male, three,” she called out as she turned each one over and measured the length by a ruler. Each crayfish’s gender could be easily identified by their abdominal appendages. Anders Reimer, the other MRT technician, standing on the other side of the stream, tallied the information on a paper form. 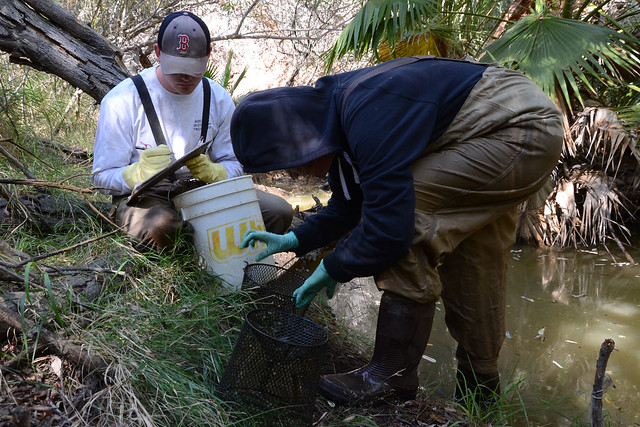 Along with the 24/7 minnow traps, the MRT technicians and volunteers also set barriers every 100 to 150 yards to prevent migration of crayfish to other parts of the stream, and use seine nets to capture any stragglers. The captured crayfish are euthanized by freezing and given to wildlife rehabilitation centers for feeding injured and recovering animals.

It may seem a big harvest with more than 17,000 crayfish trapped in the creeks so far, but compared to the their sheer numbers in the waterways and the red swamp crayfish’s long history of invasion, the effort looks like shutting the stable door after the horse has bolted. Experts believe the crayfish were introduced to California in the 1960s as bait for sport fishing. The region’s Mediterranean climate and lack of natural predators, made it an accommodating home for the crustacean.

“Crayfish is probably the worst one we have,” says Katherine Pease, a watershed scientist with Heal the Bay and one of the authors of the report. “Both mosquito fish and crayfish eat eggs and tadpoles. But crayfish are much more densely populated and abundant. “

“Why don’t we just call people to eat them up?” This is one of the most frequently asked questions by first-time volunteers. After all, crayfish a popular food in the American South. “We do not recommend people consume them,” MRT’s Reimer says, “because the water quality in this area is a big concern too.”

Systematic research about crayfish in the Santa Monica Mountain area was first conducted by Lee Kats in 1994. Kats, a conservation biologist at Pepperdine University, has been leading a team to study the invasive species and local amphibians in the area for more than 20 years. He found that most of the local amphibians, such as California newts and frogs, no longer existed in the area where crayfish were found, even though they were widely distributed in the mid-1980s.

According to Kats’ research, the damage is specific to amphibians because their skins are permeable, their eggs are unshelled, and their growth is restricted in water until metamorphosis. “Crayfish are such aggressive species, they not only eat eggs and larvae, they also attack every adult amphibian they meet and drive them onto land,” Kats says.

His studies show, for example, that newts have evolved to fend off the local predators by secreting a poison when attacked. However, the poison is ineffective on crayfish.

One exception is the California tree frog. In Pease’s study, she found that the tadpoles of the tree frogs living where crayfish are abundant have shorter tails than others. It seemed counter-intuitive at the first, since shorter tails mean decreased swimming speed and less likelihood to escape from predators. But Pease found that shorter tails require less time for metamorphosis, so the tadpoles changed into frogs and get out of the water faster. Unfortunately, no other local species have managed to evolve to outwit the crayfish.

“Crayfish are tough species and cause damage in other places of the world,” Pease says. “I am not sure if there are any successful cases of wiping them out. We are also not sure if the situation is getting better. But one thing for sure: it is a long-lasting battle.”

Kats’ latest study shows that the ongoing drought has helped the crayfish become more rampant. One thing this predator has not been able to adapt to in its new home is fast water flow. Several years ago, many of them were washed out and killed by storm events, which allowed the newts to re-appear. However, Southern California has been in since 2005, and it is a trend that would last a decade or more, which is good news for the crayfish.

“There is a global trend of amphibians’ decline,” Kats says. “Causes are complex, including pollution, ultraviolet [light], urbanization, climate change, etc. In the Santa Monica Mountains area, we consider the invasive species as the primary cause.”