After years of investigations, a research team identifies heat and drought as the primary culprits behind a decade-long decline.
Ian Rose

For over a decade, Washington state officials have been tracking a killer. Victims number in the thousands, spread over an area that covers nearly half the state. If you’re wondering why you haven’t heard of such a wave of devastation, it’s because the victims aren’t people. They’re trees.

The first signs of trouble for bigleaf maples — the tallest North American maple trees — appeared in 2010, when the Washington Department of Natural Resources began receiving calls about declining trees on both public and private land across the region. Photo by Greg Shine, Bureau of Land Management.

The bigleaf maple (Acer macrophyllum) is an iconic deciduous tree of the Pacific Northwest. Even if you’ve never had the pleasure of standing in the dappled shade of this tallest North American maple, you’ve probably seen its namesake leaf. It’s become something of a meme to post pictures of the huge leaves, often well over a foot wide, with a relatively puny human hand next to it for scale. Among Northwest hardwood trees, it is second in abundance only to the ubiquitous red alder. But this widespread and ecologically important tree species is in serious long-term decline. A new paper in the journal Forest Ecology and Management explores why.

The first signs of trouble appeared in 2010. Calls started coming in to the Washington Department of Natural Resources (DNR) reporting declining maples on both private and public land across the region — whole trees were going bare of leaves and many, especially younger trees, were dying. Amy Ramsey, a forest pathologist with the department, started investigating these early reports along with a few others in the office.

“It was really just a couple of people prioritizing bigleaf maple,” says Ramsey. ”We had to really scrap it together at the beginning, without much budget.”

The DNR team started collecting samples and partnered with local laboratories to begin eliminating suspects. Early on, they considered all sorts of causes — fungal infections, root diseases, even chewing damage from squirrels. One by one, these were ruled out, and as the true culprit remained elusive, the scale of the damage only got worse.

Ramsey says 2016 was an especially deadly year for young maples, and that may have actually helped the team to narrow down the possible causes. That’s because 2015 was, at the time, a record drought year in Washington. Although the winter had seen roughly average total precipitation, it had been very warm, so almost all of it had fallen as rain, not snow. The precious little snowpack that did accumulate melted early, and the following summer saw some of the hottest and driest conditions ever recorded in the state. Signs were pointing to climate-related causes for the trees’ plight.

Then something else happened that moved the investigation along: A University of Washington graduate student named Jacob Betzen decided to base his master’s degree research on the question of bigleaf maple decline. In 2014, he started collecting samples.

“Jake is a pretty humble guy,” says Ramsey, “but we really wouldn’t have gotten the data we did or been able to understand what we do without him focusing his graduate work on this.” His master’s thesis was the basis for the recent paper, and the observations he made, combined with data already collected at DNR and other agencies, pointed to a clear if indirect culprit: heat.

Betzen’s research looked at bigleaf maples at sites throughout western Washington, examining not only the trees themselves, but the soil and leaf litter around them. Almost a quarter of randomly sampled maples showed some sign of decline. Though the team didn’t find clear sign of disease or other biological threats, they observed that more trees were damaged in areas with higher summer temperatures. Tree core samples, which allowed them to study stem growth by year, also showed clear signs of damage in years following deep drought summers, especially after the big drought of 2015. This damage starts as premature wilting of leaves, then whole branches going bare, weakening the tree to the point that it can no longer fight off diseases or other stressors, and it dies.

The decline of such a large, common tree species is sure to have a long list of downstream effects. “This tree is pretty important, economically, culturally, and ecologically as well. It’s used by a lot of people, and is also very common in urban areas,” says Betzen. Historically, bigleaf maples have been a source of both wood and medicine for Indigenous people in the Northwest. Bigleaf wood is used today most notably in musical instruments, especially guitars and piano frames. 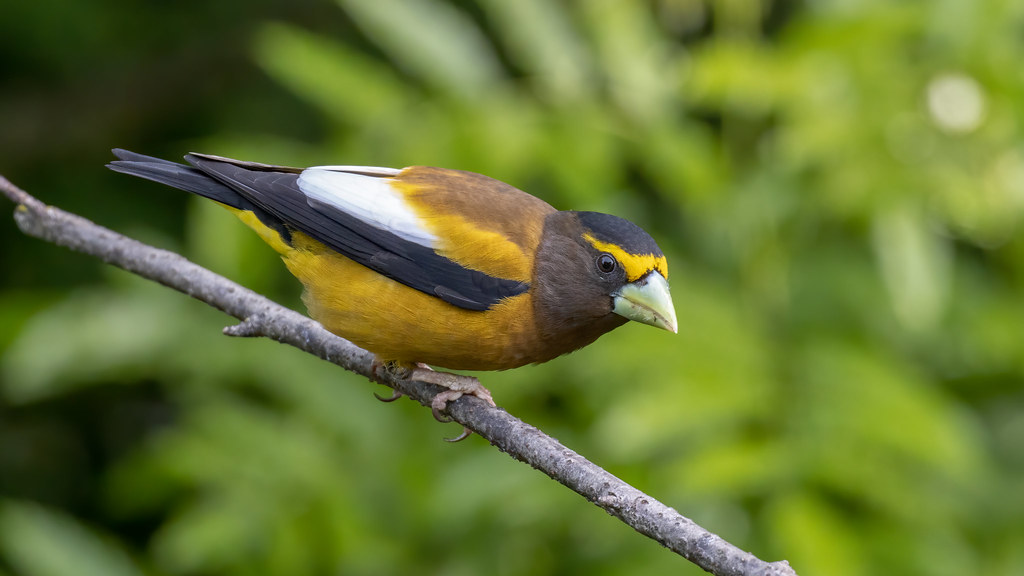 A variety of birds feed on bigleaf maple seeds, buds, and flowers, including evening grosbeaks, which were once common in Pacific Northwest forests. Photo by Eric Ellingson. 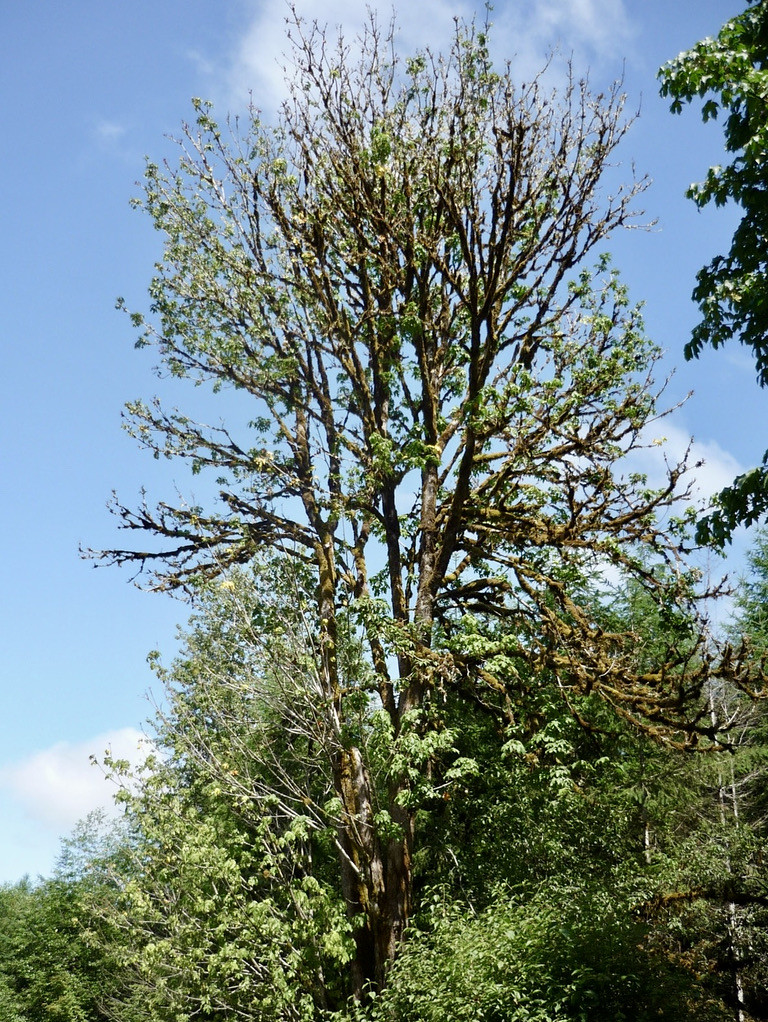 A bigleaf maple tree that has nearly died in Washington. Photo by Washington Department of Natural Resources.

The most widespread impact of further decline, though, is likely to be on the Northwest forest ecosystem. Bigleaf maples are especially important hosts for epiphytes, species of plants that grow not on soil, but directly on other plants. More mosses, lichens, and ferns grow on the stems and branches of bigleaf maples than any other tree in the region. A variety of birds and mammals also feed on its seeds, buds, and flowers, including evening grosbeaks, which were once common in Northwest forests. The population of this beautiful yellow and black songbird has plummeted by 92 percent since 1970 in the United States and Canada, the steepest decline of any North American land bird.

“It’s the same old story: everything is interconnected,” says Betzen. “It’s hard to predict, but it would be difficult to imagine it not having an impact on the surrounding forest.”

We also don’t yet know the effects of last year’s severe drought and the historic “heat dome” event that demolished heat records throughout the Northwest this past summer. Already, there are signs of extreme stress on other species. Christmas tree farms in Oregon, for example, saw up to 30 percent mortality and damage to virtually every seedling exposed to the scorching heat.

While the prognosis for western Washington maples under a warming, drying climate looks bleak, elsewhere in the tree’s range — which extends from southern California up to British Columbia — the story could be more complicated.

“I don’t find [the research] super reflective of Portland and the Willamette Valley, where bigleaf maple is doing comparatively well in terms of its resistance to drought conditions,” says Dr. Aaron Ramirez, who studies western forest health and disturbance at Reed College in Portland, with a particular focus on drought and its ecological effects. Though he highlighted the importance of the study for understanding the maple decline in Washington, in Oregon he’s found western red cedars, not bigleaf maples, to be the most impacted by heat and drought. Ramsey says there is also some evidence that trees in eastern Washington, where conditions have always been hotter and drier, may be more resilient to drought damage than in historically wetter areas closer to the coast.

This variation across the bigleaf maple’s range offers some hope for the tree’s future. But conditions are only predicted to get hotter and drier throughout the Northwest as the effects of climate change become more severe. Studies like Betzen’s and Ramirez’s, and monitoring by agencies like the Washington DNR, are vital to charting the uncertain future of this essential Northwest species, and all the other species that depend on it.

Ian Rose is a freelance writer focused on climate and biodiversity issues in the Pacific Northwest. He tweets @ianrosewrites.