Living in the Shadow of Colombia’s Largest Coal Mine

The sun is rising in the Indigenous reserve Provincial, in the northern Colombian province of La Guajira. The morning silence is broken by a pounding sound, emanating from a nearby mining pit just a few hundred meters from the community.

Photo Ynske Boersma El Cerrejón is among the world’s largest coal mines. Communities in La Guajira, one of Colombia’s poorest provinces, say mining activities are polluting their water and harming their health.

“That noise continues day and night,” says local Luz Angela Uriana while grinding corn for breakfast. The air is heavy with dust, and smells vaguely of sulphur and burning coal. Smoke plumes rise above the mine. “And when they do their daily coal blast, our houses vibrate like mobile phones.”

Bordering the protected communal lands of the Indigenous reserve lies El Cerrejón, one of the world´s biggest open-cast coal mines. The company operating the mine, also named Cerrejón, extracts about one hundred tons of coal a day, with an international coal market share of 3.9 percent in 2016. Since the mine began operating in 1986, Cerrejón has exploited about 13,000 hectares of the 69,000 the company holds in concession. About 100 communities are affected by the mining activities, most Indigenous Wayúu, a smaller portion of African-Colombian descent.

Venezuela’s decision to open up the Orinoco Belt to mining threatens the Amazon rainforest.

At 10 a.m., young men on motorbikes start to arrive in front of a cockfighting arena in Las Claritas, a small village in the state of Bolívar in southeastern Venezuela. They mill around smoking cigarettes and playing cards. Their relaxed manner distracts one from the fact that nearly all of them are carrying weapons, handguns mainly, hidden under their t-shirts or tucked away in their sports pants.

The company, co-owned by mining giants Glencore, Anglo-American, and Billiton-BHP, says it complies with Colombian law and points to its sustainable development programs, such as their reforestation project and the relocations of local communities living close to the mine. But locals say the mining operations have taken a drastic toll on their health and quality of life. And they are fighting back.

In 31 years of operation, the people of Provincial have seen the mine inch closer and closer to their territory, which lies within one of Colombia’s most impoverished provinces. Too close, according to locals, who say they suffer from respiratory problems and skin diseases due to the pollution caused by mining operations. They say daily coal blasts release giant clouds of dust that pollute the air, water, and soil. Another problem is the spontaneous ignition of mined coal, which releases toxic heavy metals into the environment.

Many children in the vicinity of the mine suffer from respiratory problems, including three-year old Moisés, Luz Angela Uriana’s son. “The problems started when Moisés was eight months old,” Uriana told me. “He had a high fever, and coughed as if he was choking. Now he is three years old, and still fighting for his life. He can´t run, nor shout, and coughs at night.”

Little can be done at the local hospital. “The paediatrician says Moisés will only get better if we move to another place, but where should we go? We belong to this territory,” says Uriana, crying.

Ricardo José Romero, coordinating doctor of the local hospital Nuestra Señora del Pilar in nearby Barrancas, confirms he has seen an increase in illnesses that could be linked to mining operations. A staggering 48 percent of patients arrive at the hospital with acute respiratory problems. The hospital even has a special emergency area for respiratory illnesses. During my visit, five children were waiting for treatment. 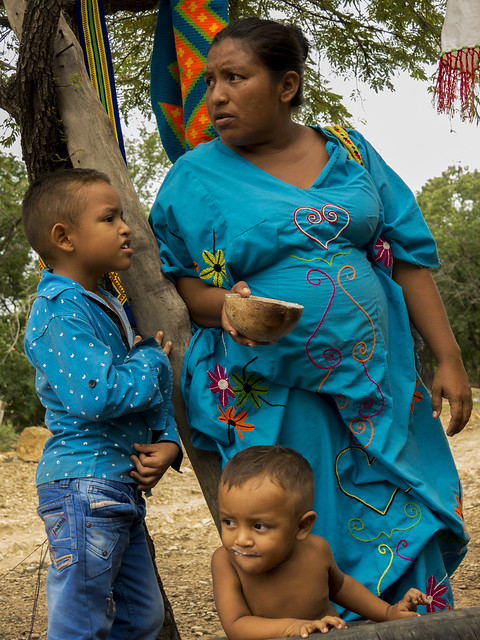 Photo by Ynske Boersma Luz Angela Uriana says her three-year-old son, Moisés, has had health problems
since he was just eight months old. She believes they are linked to pollution from
mining activities in the region.

“The illnesses we diagnose most in this hospital are acute respiratory problems, asthma, and COPD [Chronic obstructive pulmonary disease]. These symptoms occur with people living in the vicinity of the mine, and employees of El Cerrejón,” says Romero. “Also, we see many patients with skin problems, and cancer.”

“But as a small hospital without enough funding, there is not much we can do here,” continues Romero. “The government allows this multinational to exploit our environment, but doesn´t care about the consequences for its inhabitants. In more than 30 years that the mine has been here, not a single study has been done about the impacts on the health of people affected by their operation.”

According to the company itself, Cerrejón holds no responsibility for the rise of respiratory illnesses in the vicinity of their operation. “It´s all a matter of perception,” says Victor Garrido, manager of social affairs for El Cerrejón. “The inhabitants think [they have] a real problem, but we consider it an imaginary problem.”

Garrido then points to the Colombian environmental standards the company says it complies with. He doesn’t mention, however, that environmental standards in Colombia are far below international recommendations. For example, the World Health Organization recommends that annual mean concentrations of PM10 — exposure to which is associated with respiratory and cardiovascular problems — not exceed 20 mg/m3, while the Colombian recommendation is set at 50 mg/m3.

The mine has also taken a severe toll on the region´s water resources. The mining area is traversed by the province´s most important river, the Rancheria. About 55,000 people depend on the river as their only water supply, in a province so dry that it rains no more than two months a year, with an average rainfall between 500 and 1000 mm per year.

After 31 years of coal extraction, the river has become a muddy, contaminated stream. El Cerrejón uses at least 34 million liters of water a day for their operation, according to Cerrejon official Gabriel Bustos. The water is extracted from superficial and subterranean water sources from the Rancheria and its tributaries. During the extreme drought caused by El Niño between 2012 and 2015, the Rancheria dried out completely in some parts, causing severe food shortages among local people in the area, whose animals and crops died from the lack of water.

According to Indepaz, a Colombian non-profit focused on peace and development, toxic wastewater from the mine contaminated with heavy metals and fuel residues are also discharged into the local waterways. Recent studies conducted by Indepaz show that concentrations of heavy metals like zinc, lead, magnesium, and barium start to rise at the points where Cerrejón discharges wastewater into the rivers and streams. 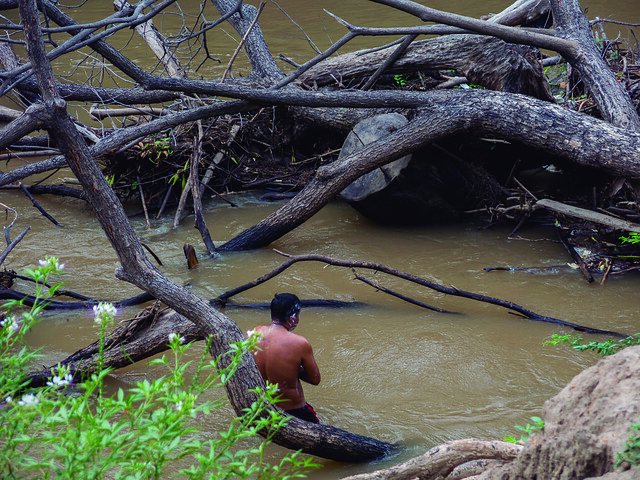 Photo Ynske Boersma Some 55,000 people depend on the Rancheria river for water, which locals say has been depleted and contaminated since El Cerrejón began operating more than three decades ago.

Moreover, in samples taken from the wells of several communities close to the mine, Indepaz found concentrations of heavy metals making the water unsuitable for human consumption. In the well in Provincial, researchers found arsenic and magnesium levels above those permitted for these metals. Specifically, in August 2016 they found arsenic levels of 0.026 mg/liter. The permitted value of arsenic in Colombia is 0.01 mg/liter. These metals, naturally present in rock and carbon, get dispersed in the environment by mining activity, contaminating the air, water and soil.

Cerrejón denies allegations that their operation is polluting local water resources, but Golda Fuentes, an investigator with Indepaz, contests this: “El Cerrejón cannot possibly say that they are not contaminating the environment. We found that these concentrations are incompatible even with the Colombian standards for a healthy environment. The problem is that the laws applying to mining companies allow this contamination.”

What’s more, an estimated fifteen tributaries of the Rancheria have disappeared entirely due to coal extraction and diversion projects, says Mauricio Enrique Ramírez Álvarez, former director of the province´s Planning Department. The people who used to rely on these water sources now rely on wells, which are often contaminated. Local communities have been fighting against expanded mining operations for years. A plan to divert a 26-kilometer-section of the Rancheria River in order to extract an estimated 500 million tons of coal underneath it was suspended in 2012 due to mounting social protests. And recent protests have also delayed plans by Cerrejón to divert another local stream, the Arroyo Bruno, one of the most important tributaries of the Rancheria. During the the drought in 2012-2015, the Bruno was the only major water resource left in the area.

In response to the Bruno diversion plan, locals from El Carrejon went to court. They demanded suspension of the plans, noting that the company had failed to consult them about the project as required under Colombian national law. Last August, the judge ruled in their favor, suspending the expansion plans until these consultations have been carried out. Moreover, he ordered the Colombian Institute for Geology Terrae to revise the environmental studies for the project, which the company had relied on for its licence to divert the stream.

The judge found that these studies omitted important information about the effects of the diversion on subterranean water bodies, says Julio Fierro Morales from Terrae. “Whereas these water bodies are crucial for the survival of the stream.”

“The moment El Cerrejon starts extracting coal from underneath the original river bed, the underground aquifers which store water will be destroyed, drying out the stream,” Morales explains. “Besides, the company should have consulted the communities about the project. But Colombian authorities are that weak and corrupt that Cerrejon gets away with everything.”

Back to the Wayuu-reserve Provincial, Luis Segundo Bouriayu is more than a little frustrated. “Before we could grow our own food, and eat fish from the river,” he says. “But since the mine is here, nothing will grow anymore because of the contamination of the river and soils. The water we drink we need to buy, without having the money to pay for it.”