At first glance, Torreya taxifolia, or Florida torreya, is not an especially inspiring tree. The prickly conifer is often called the “stinking cedar” for the pungent odor that results from crushing its foliage. Still, the bushy, once-abundant evergreen trees are part of a unique forest ecosystem that brings together northern species like beech and hickory and southern plants like magnolias and palmettos. Their durable wood was used for fence posts, shingles, and steamboat fuel — in the past, the evergreens have even been displayed as Christmas trees. That is, until the turn of the last century, when a fungal disease decimated most of the population and locked the remaining trees in perpetual preadolescence, infecting them before they grew large enough to set seed. The Florida torreya is now believed to be the most endangered conifer tree — less than a thousand spindly trees survive in their native habitat today, none of which are known to reproduce.

For a group of scrappy citizen scientists known as the Torreya Guardians, though, the Florida torreya is more than just a malodorous, finicky conifer — it is a tree worth saving. And it is also becoming a symbol of what can be achieved when a group of private citizens puts their hearts and minds towards saving an endangered species. Their radical if controversial approach might end up shifting the future of conservation, particularly in a warming world.

Besides being one of the oldest known species on Earth, Florida torreya is a glacial relict, trapped in the Florida panhandle during the last Ice Age in the pocket of rich soils along the cool, moist shores of the Apalachicola River. Unlike other plants, Florida torreya was unable to spread beyond its cozy refuge after the ice receded some 15,000 years ago. Things had changed since the last interglacial period the trees endured. For starters, the enormous, herbivorous browsers like mastodons, mammoths, and giant ground sloths that once spread its seeds — which are about the size of a silver dollar and encased in a thin green flesh, like a skinless avocado — had nearly all died out. A new mammal had also taken over: humans, whose tendency to play with fire regimes and toy with land further impacted Florida torreyas’ ability to thrive.

Over the past hundred years, yet another obstacle has emerged for the Florida torreya: climate change. Other conifers in mountainous areas, like the California torreya, have space to shift upslope in order to keep pace with the warming climate. The Florida torreya currently occupies a few ravines within a 50-square-kilometer range. With no mountains nearby, the trees would need to migrate nearly 250 miles before escaping warming temperatures with such quick elevational gain.

“These plants have already shown a lot of spunk when it comes to surviving massive climate shifts, but climate is going to be moving much faster than they can move forward,” says Connie Barlow, founder of the Torreya Guardians.

After waking up to the rapidly changing reality for the species — which is listed as endangered under the US Endangered Species Act and as critically endangered on the IUCN Red List of Threatened Species — Barlow started an e-mail correspondence with botanists, conservationists, and other torreya enthusiasts about the future of the tree. She soon presented a radical proposal: could humans move the Florida torreya to a more suitable habitat? Cretaceous-era Florida torreya fossils had cropped up in places like North Carolina and Georgia, so perhaps they could thrive there again if they had a little help making the journey.

Barlow’s idea for assisted migration, or using human intervention to move species and help them establish new habitats, had never been deliberately implemented for a plant in the United States. Some balked at the idea; ecologist Mark Schwartz, who has studied the Florida torreya at the Apalachicola Bluffs preserve for decades, countered that the species should be restored in its current range rather than moved elsewhere. He argued that there was not enough data supporting the idea that the Florida torreya’s decline was caused by climate change rather than site-specific factors like soil health, which could conceivably be studied and remedied to ensure the Florida torreya stayed where it belonged.

The main anxiety surrounding assisted migration, however, was the fear that playing God with non-native plants could cause problems in the host ecosystems. Schwartz argued that there would be clear winners and losers if humans were to tinker with the delicate balance of habitats by moving species. Ecosystems are complex, and it is hard to say whether a species will rapidly take over its host ecosystem at the expense of other native species when Goldilocks conditions are in place. Buffelgrass transplanted to the desert Southwest in the 1940s to feed cattle, for example, continues to spread across even protected lands in Arizona. On the other hand, relocated species could suffer in their new homes for unforeseen reasons, as was the case when Douglas firs were reforested in British Columbia — they failed to form symbiotic relationships with the area soil and root fungi. 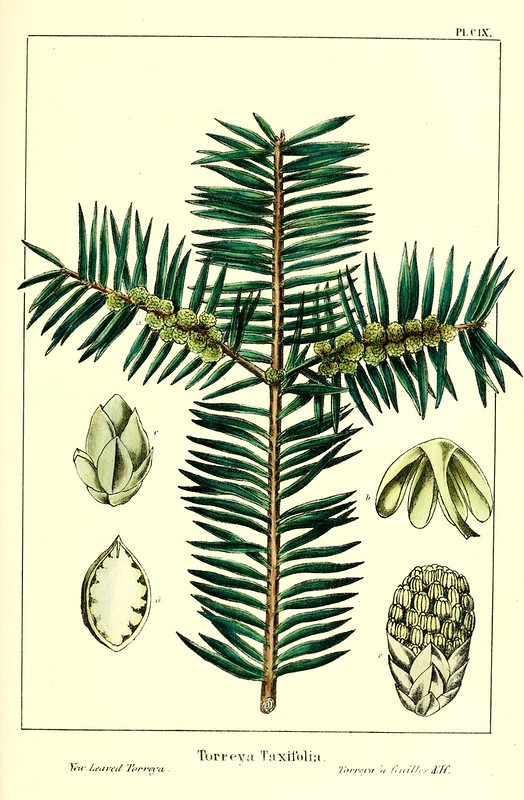 But to Barlow and her budding Guardians, the Florida torreya seemed like a perfect candidate to experiment with the bounds of assisted migration. The Florida torreya seemed unlikely to wreak such havoc in its new ecosystems — the fact that its seeds do not easily spread is one of the reasons Florida torreya could not escape to more suitable habitats in the first place. Even Schwartz conceded in his argument against assisted migration for the Florida torreya that “the likelihood of Torreya taxifolia expanding out of control is low.” And with the species on the brink of extinction, suffering so visibly even in their native range, what was there to lose even if the colonies were to fail?

Those who were intrigued by the idea banded together to form the Torreya Guardians, a group whose singular mission is to save the Florida torreya using assisted migration. In 2008, the Torreya Guardians completed the first assisted migration of a plant endangered by climate change in the US when they transported 31 Florida torreya seedlings 400 miles north of the Florida panhandle to Waynesville, North Carolina. Florida torreyas had long been grown in Biltmore Gardens, a greenhouse in nearby Asheville, which suggested the climate might be right for the first satellite forest.

“Pulling them out of the van, I was just hopscotching and dancing,” says Lee Barnes, a horticulturist and one of the founding Torreya Guardians who has been working with the trees since he was a graduate student in the mid-1980s. “There were more healthy plants there than I had seen in a lifetime.”

The results weren’t perfect — over the next couple of years, drought knocked out a few of the trees. But several trees remain a decade later, and the experiment catalyzed the trial and error process that is at the heart of the Torreya Guardians’ ethos. As of 2018, Torreya Guardians has donated seeds or seedlings to private planters in 12 states, ranging from Tennessee to Oregon. (The Endangered Species Act puts limits on the relocation of endangered plants like the Florida torreya, but allows for purchase and transport across state lines as long as plants are taken from and planted on private property rather than federal land.)

The Guardians accept that the trees may not thrive in their new homes right away, but a key part of the Guardians’ mission is to plant the Florida torreya in natural ecosystems rather than controlled systems like botanical gardens. “Our intent is to develop breeding populations that are naturalized with whatever local ecosystem they’re successful,” says Barnes. “Botanical gardens are not ecosystems. The bottom line in conservation ecology is that you have to save entire habitats.”

The decentralized network of citizen scientists that make up the Guardians operates more or less independently, quietly tending to their own Florida torreya groves and sending the requisite data about how their trees are faring to Barlow. As with any good twenty-first century eco-organizers, the Torreya Guardians use their website as a forum to share updates about their trees and invite prospective planters to apply for seed packets (though Barlow says most new planters are recruited through “word of mouth”).

“It’s a new era for how conservation can happen for endangered plants,” says Barlow. “We are in a time in the Internet era where scientists do not have to rely on texts and published papers. There is so much more that can be learned from a video.”

The citizen scientists gathering the data for the Torreya Guardians range widely in experience. “I have absolutely no botanical background except lifelong interest in growing things,” says Clint Bancroft, a Torreya Guardian based in Tennessee who is a nurse anesthesiologist by training. “I’m just a guy with a green thumb who’s interested in growing rare trees.” Bancroft shies away from the term “citizen scientist,” but he and the other Guardians are gathering important information about the endangered plant. Each new colony teaches the group more about the conditions under which the Florida torreya thrives, including the tree’s habitat preferences at various latitudes. The forests also help the group develop best practices for propagating the tree that require the least amount of post-planting intervention, and determine the northernmost limits where the Florida torreya can survive in today’s climate.

“Humans are going to have to make the move,” says Frank Callahan, a Torreya Guardian based in Oregon. “When we’ve got species going extinct because of our impact, that is problematic to me.” Callahan, who has worked as a botanist for over 50 years, says a grove of Florida torreyas planted at his mother’s house in Medford boasts some of the greatest seed producing trees in the entire Guardians network, while other West Coast colonies attempted in southern California were less successful. Callahan says both experiences provided important information about the trees’ needs. He hopes to plant trees closer to the Oregon coast, where he believes they will thrive.

From East to West, the connective fiber between the Guardians is their fierce founder, Connie Barlow; as Bancroft so succinctly put it, “Torreya Guardians is Connie Barlow and a website.” Even after over a decade working for the salvation of a single tree, Barlow is brimming with ideas she wants to share with individuals and groups trying to save species, from her own prescriptions to use assisted migration for other species in the face of a changing climate to a new “back to basics” approach to the Endangered Species Act. But perhaps her most radical belief is that in the willingness of private citizens to open their hearts — and land — to species in trouble when they are given the chance.

“There are tremendous opportunities to empower what volunteer citizens do best to expand endangered species recovery,” she says. “It’s more essential now [than ever.]”

Sam Schipani is a writer based in northern Virginia. She has previously written for Sierra and Smithsonian.