Elephants are revered in this island nation, but that doesn’t prevent them from being abused
Prasadini Nanayakkara

Since the times of kings and kingdoms, elephants have been a mark of prestige and nobility in Sri Lanka. As far back as 600 BCE, wars were waged and won and kingdoms reclaimed, seated upon elephants. Over the centuries, elephants have inherited a place of reverence in the collective mindset of Sri Lankans and the prestige that comes with owning an elephant has trickled down to the present day. Elephants continue to be featured in religious and cultural festivals in Sri Lanka today. But this traditional reverence of elephants doesn’t prevent the endangered species from being abused. 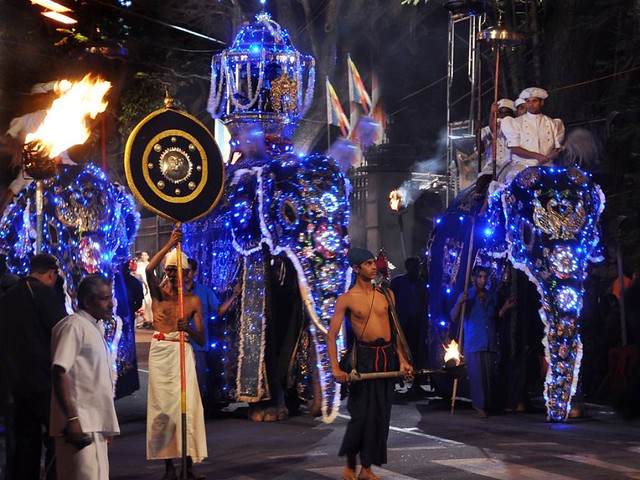 Photo by Amila TennakoonSri Lankan Elephants continue to be featured in religious and cultural festivals like the Buddhist cultural pageant perahera. Ironically, it is the regard bestowed upon them that has in part resulted in the elephant’s lifelong distress in captivity.

Ironically, it is the regard bestowed upon the elephant that has in part resulted in the animal’s lifelong distress in captivity.

The Sri Lankan elephant (Elephas maximus maximus) is the largest of three Asian elephant sub species. Its dark skin and patches of depigmentation on its ears, face, trunk and belly, sets it apart from its two Asian relatives. Once found throughout the island nation that lies below the Indian peninsula, these elephants are now being confined to increasingly smaller areas as development activities clear forests and disrupt their ancient migratory routes. The island’s elephant population has dropped by almost 65 percent since the turn of the nineteenth century.

However, Sri Lanka still has a relatively healthy population of wild elephants. The latest census in 2011 recorded 6,000 elephants in the wild and approximately 120 in captivity. Wild elephants are protected under the country’s Fauna and Flora Protection Ordinance, and killing one carries the death penalty. The capture of wild elephants was banned in the late 1970s and in order to deter this practice, all existing captive elephants must be registered with the Department of Wildlife Conservation and their owners are required to have a license to hold them in their keep.

Despite these measures, elephants in Sri Lanka, both in the wild and in captivity are subject to abuse due to a variety of reasons including sketchy adherence to laws and regulations, and the continuance of old traditions.

The highlight of the Sri Lankan Buddhist cultural pageant called perahera that pays homage to the Buddha, is the sight of a magnificent tusker draped in finery, bearing the sacred relic casket upon its back. The tusker is accompanied by scores of other caparisoned elephants. Needless to say, these are elephants held in captivity. It doesn’t take much to gauge what stressors this sensitive, sentient animal must undergo during the course of all the activity.

During the festive season, they are transported across long distances to pageant sites and are often deprived of rest or sleep. They are kept tethered or confined for long periods of time, sometimes without adequate food and water in order to keep them from defecating or urinating on the streets during the pageant. In the thick of the festivities, they are subjected to massive crowds, loud noises, and sometimes even fire — all of which are very stressful for elephants. (The repetitive head-bobbing that elephants often do during these festivals is a sign of trauma.)

Then, there is the silent suffering elephants endure at the hands of mahouts of varying temperaments. There have been reports of elephant deaths due to jab wounds inflicted by the ankus — the sharp metal spike a mahout wields to control the elephant.

Captive elephants are also used in the logging industry to haul timber and displayed at some tourist sites, many of which offer elephant-back safaris.

A nation where the majority religion is Buddhism, one that espouses in its doctrine loving kindness for all living beings, the practice of hiring elephants for parades is a matter of tradition taking precedence. To the devout believers, the elephants are fulfilling a higher purpose and in turn earn the respect and even reverence of the masses. In line with this thinking is the belief that after years of commitment to a meritorious deed the tusker will no doubt be rewarded in another life.

But such beliefs and use of elephants in pageants are increasingly being criticized by tourists, visitors, and animal rights activists. Whether or not they prescribe to this belief system, the purely empathetic perspective is that these practices equate to inhumane treatment, says Jayantha Jayewardene, managing trustee of the Biodiversity and Elephant Conservation Trust, a Sri Lankan nonprofit. “The methods of management carried out by mahouts in Sri Lanka are archaic and what we need is to train these handlers in more humane and scientific methods of elephant management,” he says.

Dr. Deepani Jayantha, veterinarian and country representative of Elemotion Foundation, a US-based nonprofit that works to improve the life of Asian elephants, has a much stronger stance on this issue. Elephants simply shouldn’t be held in captivity, she says.

“The keeping of an elephant in private ownership is unarguably for social status. With the colossal body of the animal comes colossal needs of maintenance and the veterinary bills inclusive; therefore, the owner needs huge sums of money to sustain the elephant. The simple solution to supply the needed funds for the animal is to be worked. The monthly wage for an average working elephant is about LKR 100,000 [$685]. Is the captive management of elephants in Sri Lanka sustainable in this manner?”

Furthermore, Jayantha explains, unlike domesticated pets, captive elephants are essentially wild elephants in chains, and are genetically and behaviorally predisposed to remain wild.

Her report further reveals that most of the captive elephants in Sri Lanka today were caught from the wild up until the 1980s and are now aging. To meet the continuing demand for captive elephants, the state-run Pinnawela Elephant Orphanage, home to about 80 semi-wild elephants, frequently releases calves and young adult elephants into the care of private owners and Buddhist temples.

“A few elephants have been diplomatic gifts to Sri Lankan Buddhist temples from the other elephant range countries in Asia,” she writes in the report. “Finally, the well-organized, politically backed racket of smuggling baby elephants from the wild currently adds more animals to the population. A recent newspaper [article] said there are about 20 such abducted animals secretly kept in and around Colombo. This fact itself explains that captive elephant industry in Sri Lanka, thus tourism related to it, is unfortunately blood-stained!” (These reports remain mired in controversy and are currently being investigated by local law enforcement.)

Continuing old-fashioned traditions, Jayantha believes, is the only motivation for present day elephant owners. “Elephants were draught animals in the past and their magnificent physique earned them royal recognition. Do we still need an elephant for the same purpose in today’s context?” she asks. Jayantha stresses the “need to review our traditional thinking in order to have best management measures for captive elephants”. 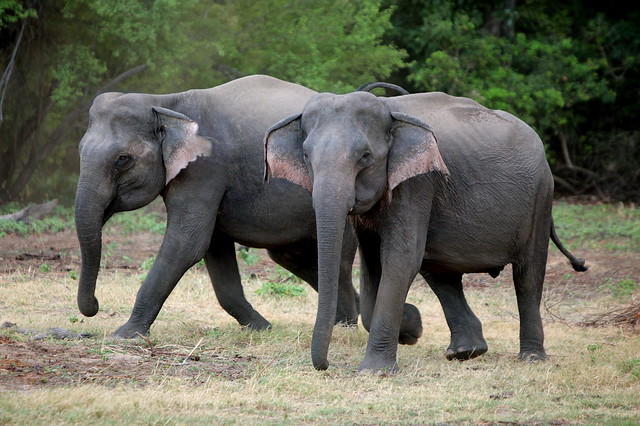 The indiscriminate felling of jungle habitat to fulfill persistent needs of human development and expanding agriculture are increasingly fragmenting their habitats and forcing elephants into human settlements in search of food and water, leading to face offs between them and the local populace.

The majority of the wild elephant populations is found in the country’s many national parks and protected areas, but many of the elephants also spend a significant amount of time outside these zones where they come into conflict with rural communities, that are primarily dependent on agriculture. The problem is exacerbated by the elephants’ preference for crops such as sugar cane, bananas and other fruits frequently grown by farmers.

According to the Department of Wildlife Conservation records, around 200 elephants are killed by people in Sri Lanka every year, mostly by villagers acting in retaliation or self-defense. Meanwhile, around 56 people a year die in elephant-related incidents around the country. (Elephants aren’t hunted for sport or food in Sri Lanka, and are rarely ever poached for their tusks or other body parts.)

Conversely, there are also many instances when elephants that have fallen victim to the dangers of human habitats, such as man-made pits, have been rescued by villagers. Most times, an elephant or a calf in distress survives the ordeal and is released back into the wild. It is a dichotomy of human nature in dealing with wild elephants, explains Jayewardene of the Biodiversity and Elephant Conservation Trust. “There is affection for the elephant in the hearts and minds of these people. However when human-elephant conflicts occur there is stress brought upon the communities due to damage, depredation and loss of life,” he says. And it is this socio economic setback that tests the people’s affinity and affection for elephants.

Unfortunately mitigation measures have been sporadic over the years and conflicts have gone mostly unchecked. “The human-elephant conflict in Sri Lanka has come to a stage where it cannot be eradicated totally — it’s now too late for that,” Jayewardene says. What can be done, however, is to try and stem the current escalating levels of conflict through well-planned mitigation measures. Awareness, he says, is an absolute necessity in any elephant conservation strategy. This involves, laying bare the conflict situation, its causes, and the steps affected communities can take to make an impact. For the past 15 years Jayewardene has been carrying out awareness programs in 150 schools each year, across the island. “Such programs should be carried out at a much larger scale since human-elephant conflicts occur in most parts of Sri Lanka,” he adds.

It is evident that education and awareness are crucial, not only for wild elephant conservation but also for the welfare of captive elephants. As Dr. Jayantha states: “All it takes is a little time spent on elephant natural history to understand that elephants could never be kept successfully, confined all day long providing limited food and water; elephants’ biological needs are much more complex.”