In the last month, Native Hawaiians blockaded construction machinery headed for the top of sacred Mauna Kea, where a 30-meter telescope is to be built. Thirty-one people were arrested. In Arizona, members of the San Carlos Apache Tribe walked 45 miles to Oak Flats and occupied a ceremonial initiation site that the US Congress has handed over to a London-based mining company for a copper mine. In California, the Winnemem Wintu Tribe continues their fierce opposition to government plans to raise the height of Shasta Dam, which would flood Winnemem sacred sites. 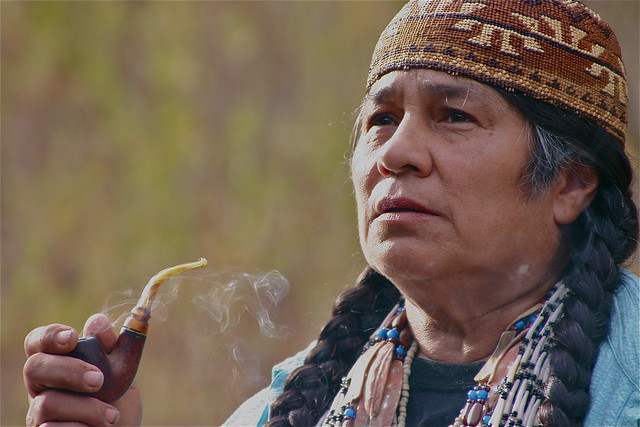 Photo by Christopher McLeod Chief Caleen Sisk of the Winnemem Wintu Tribe is fighting US government plans to raise the height of Shasta Dam.

Sacred places are alive in the hearts and minds of native people around the world. Mountains, springs, lakes, rivers, trees, groves, caves — these are sites of ceremony, inspiration and learning for human cultures throughout time. From Mt. Fuji to Uluru, from Taos Blue Lake to the Grand Canyon, sacred lands anchor peoples’ souls to earth.

The public relations push to proclaim national parks as “America’s Best Idea” missed an important historic fact: Sacred places are the oldest protected areas on the planet. This is an old idea. Perhaps it has been buried by monotheistic Christian ideals that instruct man to dominate nature, or capitalist market values that dictate extraction and profit off land that is bought and sold. But long before there was a “protected area movement” to counter environmental threats, there were culturally protected places on every continent. And there still are. 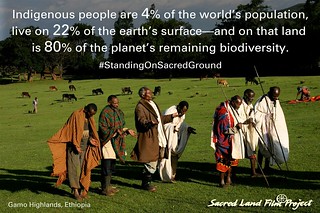 By Christopher McLeod As Standing on Sacred Ground continues to broadcast around the US,
the Sacred Land Film Project has mounted a social media campaign
to publicize the film series. The above meme has been especially popular,
with 56,000 views and 818 shares so far.

Sacred lands are more than esoteric, spiritual sanctuaries. These places protect biodiversity. The World Bank reports that indigenous people make up 4 percent of the world’s population and control 22 percent of the earth’s surface — and on that land is 80 percent of the planet’s remaining biodiversity. People whose connection to land goes back centuries and who have maintained cultural value systems rooted in sacred places have a superior land ethic. Period.

Over the last ten years I have traveled around the world documenting the uniqueness of indigenous cultures and the universality of values that honor the sacred spiritual dimension of land and water. Reciprocity. Reverence. Respect. Relationship. Yet everywhere I go, aboriginal lands are under siege, as new technology and energy addictions push corporations into more and more remote places to satisfy global consumer demand. 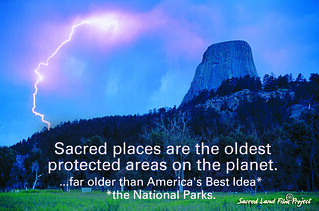 By Christopher McLeod Cultural values, oral tradition, and respect for nature’s power, all add up
to one of humanity’s best ideas.

The resulting film series, Standing on Sacred Ground, shows Altaians in Central Asia fighting Russia and China’s plan to build a natural gas pipeline across a sacred burial ground on the Ukok Plateau, a World Heritage site. In Alberta, Canada, First Nations people suffer an epidemic of cancer, pull deformed fish from rivers and lakes, yet face a government that is totally supportive of a tar sands industry it helped create. In Peru, the Q’eros make pilgrimage to sacred mountains, their apus, but see glaciers — their water source — disappearing before their eyes as far-off carbon emissions warm the Andes.

Sacred places are important to hundreds of cultures that have suffered at the hands of missionaries who have warned them of their sins — including veneration of nature. As Winona LaDuke says in the film, “Sacred places are spiritual recharge areas, places of reverence where we are not only careful, but prayerful. In those places we reaffirm our relationship to our relatives, to spiritual beings, and to the land that is the source of our power.”

Ceremony, prayer and ritual still connect families and communities to land in a bond of love, affection and spiritual obligation. It’s what many in urban industrial civilization now crave. Sacred places should be at the heart of every region’s sustainability plan for the future, with indigenous people leading the way to create a new economic model and a new land ethic that can help heal our alienation from nature.

The tipping point that will signal the transition back to honoring land as sacred could come with the denial of the Keystone XL pipeline, not just because it is a climate killer that threatens the Ogallala Aquifer. Keystone should be denied because it is dirty oil destined for the US that is killing people, wildlife, rivers and forests in Alberta. It is unethical, immoral oil. It’s a violation of all that is sacred.

Davianna McGregor is one of a band of Native Hawaiians who created the Protect Kaho`olawe Ohana in the 1970s and successfully won a sacred island back from the US Navy, which had used Kaho`olawe as a bomb testing range for 50 years. McGregor says, “Christianity severed the relationship of our soul to the land. Kaho`olawe gave us a connection to our ancestors and spiritual beliefs, and we were able to call back our gods.”

In addition to legal protection for sacred places, what we need is an apology, from the US government to Native Americans and indigenous people elsewhere whose lands have been violated. We need reconciliation between cultures and with the land. This could unleash a cultural renaissance for indigenous people, and also for western civilization, painfully disconnected from nature but fully capable of remembering we are part of this Earth, not superior to it.

The award-winning Standing on Sacred Ground, tells the stories of eight embattled indigenous communities around the world. It is now airing on public television stations around the country. Don’t miss the national broadcast premiere of the second film in the series on The PBS WORLD Channel, Sunday, May 24 at 9 PM ET. Check local listings. Read more at StandingOnSacredGround.org, and check out the trailer below.