STATEN ISLAND SITS deep in California’s Sacramento-San Joaquin River Delta, one of numerous puzzle-piece-shaped isles carved from reclaimed wetland. Like much of the lowland region, the island is mostly farmland and completely encircled by several miles of levee. The shallow crater contains an expansive mosaic of fields within it, with waterways perched precariously around its outer rim. 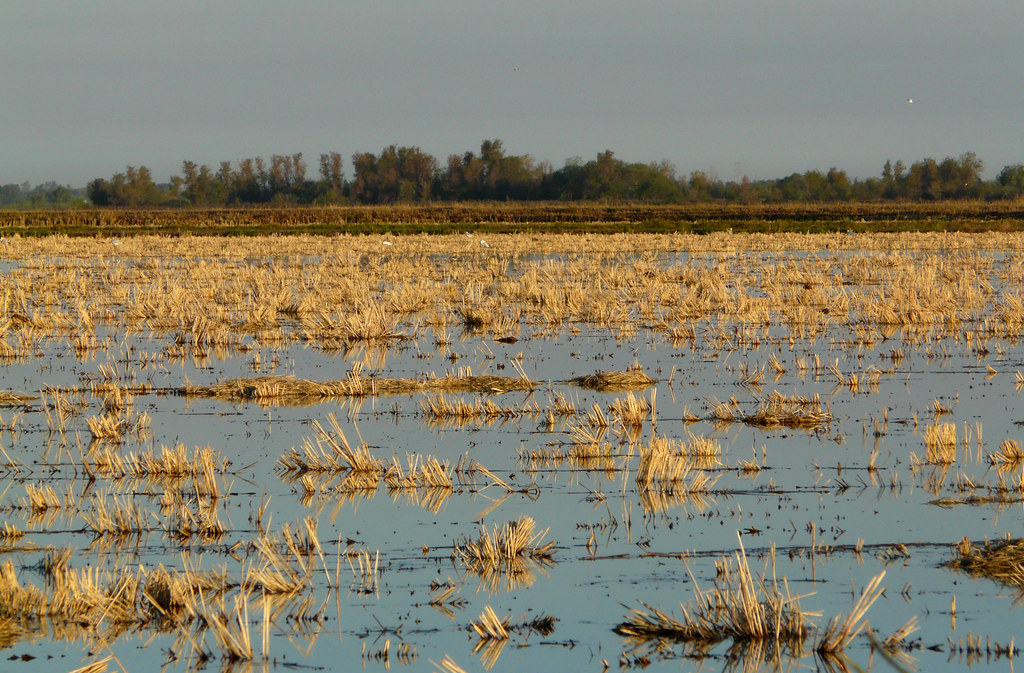 Some 8,000 acres are currently dedicated to rice in the Sacramento-San Joaquin River Delta. That number could grow significantly in the near future. Photo of harvested rice field by Bob White.

Dawit Zeleke, president of the nonprofit Conservation Farms and Ranches, runs Staten’s 8,500-acre working farm. While corn and potato fields take up most of the island, towards its southern tip, grassy stalks of rice wave knee-high in flooded paddies. Along with the flocks of long-legged shorebirds and wading waterfowl, the 1,000 acres of flat, wet fields seem right at home in the swampy landscape. Rice, however, is an uncommon crop in the Delta — and for this Northern Californian farmer, an entirely new venture.

Corn has long been king of this agricultural region. But in 2019, Zeleke took a chance on cultivating rice, starting with the conversion of a 350-acre experimental plot; in three years, he’s nearly tripled his acreage. His goal is to convert over half the island — 4,500 acres in total — to rice fields by 2025 and restore what a century-and-a-half of farming has stripped away: rich peat soil.

THE DELTA LIES at the confluence of the Sacramento, San Joaquin, and Mokelumne rivers, past the eastern reaches of the San Francisco Bay. It was once a 500,000-acre freshwater wetland, created over thousands of years by the accumulation of carbon-rich, organic matter in its estuaries.

Modern settlers began reclaiming the flat, fertile land in the 1860s, diking and draining peat marshes to build farms. Within decades, they had dried up 98 percent of the Delta and transformed it into the heart of California’s agricultural economy. More than a thousand miles of levee now surround vast fields of corn, grain, asparagus, and tomatoes planted on artificial islands, holding back the rivers and channels that snake around them.

“We’ve disconnected the water from the land,” says Letitia Grenier, program director at the nonprofit San Francisco Estuary Institute. Wetland reclamation has taken a toll on peat soil, which sequesters large amounts of carbon when left submerged. When peat dries, it oxidizes and releases carbon dioxide, she explains. And as the ground deflates, it causes the region to subside at a rate of approximately an inch a year. “Now, the middle of the Delta is wildly below sea level,” she adds, “10, 20 feet in some places.”

Subsidence puts increasing stress on the levees, Grenier says, most of which have been built from peat and aren’t federally engineered. “In an earthquake, they’ll turn into jelly and fail, and then the tide would come in [from San Francisco Bay] and pull saltwater in with it.” The diluvial consequences could have far reaching implications for the California Aqueduct, which carries fresh water from the Delta to 27 million people in Southern California. “We could have a disaster,” she adds, “where we’re sucking saltwater into the pumps.”

Even without a doomsday breach, the realities of a sinking Delta are sobering. “[At some] point, water will just come in under the levee and seep up in the fields,” she says. As saltwater intrusion and soggy soil become increasingly problematic, farming may simply cease to be an option.

Yet there’s an obvious solution to countering the impact of current agricultural practices. “When you grow rice, you’re getting the benefits of keeping peat wet,” says Grenier. With fields flooded for long stretches of the year, rice farming resaturates the soil and helps put the brakes on subsidence. It’s a promising alternative crop for the region, she adds — one that benefits both the Delta’s ecology and its main economy.

THE IDEA OF planting rice on Staten sprouted back in the 1990s, Zeleke says, but agronomic hurdles made for a challenging implementation. First, there were the climatic considerations; some 95 percent of California rice is grown in the hot and arid Sacramento Valley, an ideal environment for cultivating O. sativa japonica, the golden standard for sushi. Because Bay breezes keep Delta summers cooler, it took a long search for a short season varietal, bred to produce seed heads in lower temperatures.

Soil type between the two regions also vary. The Valley’s hard clay allows fields to be furrowed and flooded, then air-seeded en masse by crop dusters. Peat, on the other hand, is too soft to maintain ridges when wet, he explains, and needs the more focused attention of grain drills that sow seeds directly into the soil.

Rice farming also poses different challenges than corn. “Rice is a precision crop,” says Zeleke. “Between pre-planting to when you flood the rice, drain and dry your fields, and harvest it, your timing has to be perfect.” Corn, he notes, is much more forgiving; it grows quickly, is less fussy about watering, and has a much bigger harvest window.

Finally, the high silica content of rice makes it harder on harvesting and processing equipment, necessitating new combines and storage facilities built to accommodate the smaller, more abrasive grains. “There’s a whole change you need to make,” he says, including crop management, staff training, and marketing. “That’s why it’s been so difficult.”

But in the sinking Delta, the wet nature of rice farming holds a key advantage over other crops. As seepage worsens, growers are expending increasingly vast resources to drain and pump their fields. For aquatic plants like rice, maintaining a dry root zone becomes a non-issue.

In fact, the wetland region is particularly well-suited to rice. Located at the bottom end of a river system, water is simply more abundant than in other parts of California. And unlike the Sacramento Valley, where historic drought has led to severe allocation cuts, riverside farms in the Delta have riparian rights, which ensure crops with a steady supply directly from the estuary.

As acreage declines elsewhere in the state due to water shortages — the California Rice Commission reports a near 20 percent drop last year — rice is proving to be an economically viable crop for Staten. Zeleke estimates that in total, 8,000 acres of the grain are currently grown in the region; he hopes to see that amount expand fivefold in the near future.

STATEN IS A bird preserve owned by The Nature Conservancy, the parent organization of the island’s working farm. As a critical wintering stop along the Pacific Flyway, its wildlife friendly agriculture provides a vital foraging habitat for sandhill cranes and numerous migratory bird species. Rice farming on the island creates a flooded refuge for waterfowl while also increasing diversity in their food source — important considerations in a region facing the growing threat of development and the conversion of pasture to orchards and vineyards. 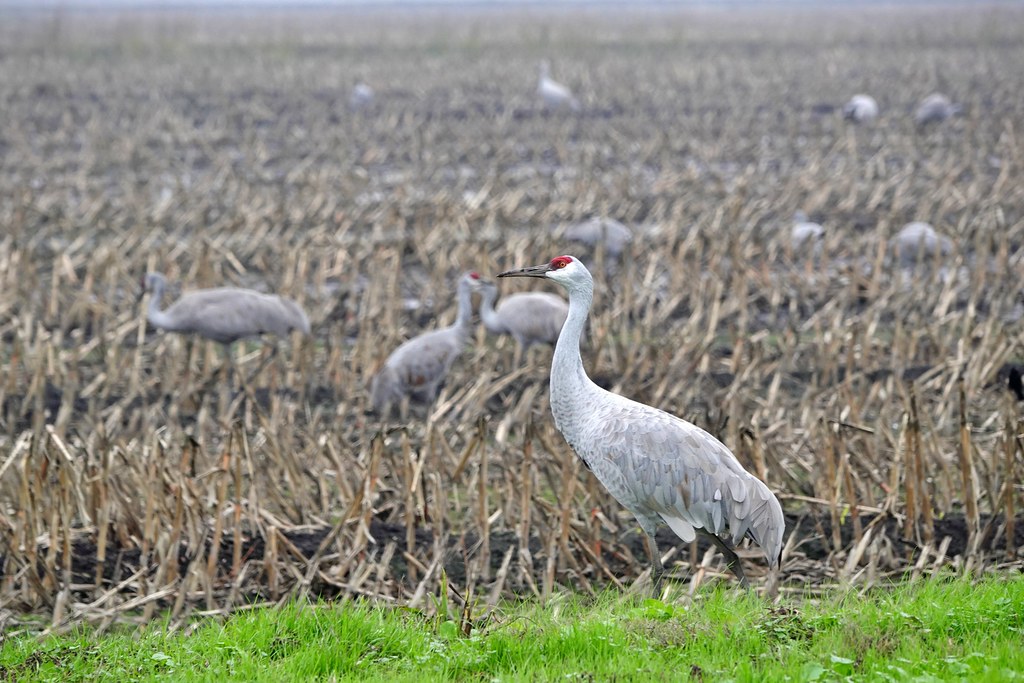 But the environmental benefits of wet paddies have an even greater reach. “Rice could potentially save the Delta,” says Campbell Ingram, executive director of the Delta Conservancy, referencing the related threats posed by subsidence. The region’s 200,000 acres of farmland emit 2 million tons of carbon dioxide annually, he explains. Flooded fields resaturate the soil and prevent carbon volatilization, plugging the area’s inordinately high and concentrated emissions — and subsequently halt further subsidence.

He and Zeleke both stress, however, that rice farming alone won’t reverse the sinking process. Even then, “it’s better than losing half an inch or so of soil [annually by] growing corn,” notes Zeleke. Increasing elevation, he says, requires restoring biomass and carbon levels in the soil. To that end, he’s studying the feasibility of turning swaths of rice fields into surrogate marshes, in 10 to 15-year cycles, to cultivate freshwater crops like reeds and tule rushes, lotus, and wild rice.

“The reality is, we may never catch up,” Ingram concedes. Reversing subsidence is painstakingly slow — studies top results at about a couple of inches a year — and rising sea levels complicate the issue. “But by God, we should quit going in the wrong direction,” he says. “Everything you’re doing out there is at risk now anyway.”

He’s optimistic, though, that efforts are trending up. There are murmurs in the rice industry about incentivizing Delta farmers to grow rice, and the Metropolitan Water District of Southern California, which owns some 20,000 acres on four nearby islands, is actively studying their conversion to managed wetlands.

“These are exciting times right now,” Zeleke says about the flood of creative, regenerative, and economically viable opportunities for sustaining the region. But he’s insistent on one point. “Ultimately,” he states, “the solution to restoring peat soils in the Delta is [that] they need to be underwater. Anybody who says otherwise is kidding themselves.”

Naoki Nitta is a food and sustainability writer based in San Francisco.