Returning Fishers to the North Cascades

The children filed up to the wooden box and peered through the doorway at the cat-like creature inside. Jeff Lewis, a wildlife biologist with the Washington Department of Fish and Wildlife (WDFW), shined a flashlight into the box so the children could see, while I stood nearby and observed their various reactions. Wonderment. Delight. Maybe a slight twinge of fear. Most of the kids, like the adults by their sides, were unfamiliar with the long, stocky carnivore curled up in the corner, who stared back at his viewers with eyes even wider than their own.

It’s not surprising that the children didn’t know what to expect from their first time meeting a fisher — a mid-sized member of the weasel family, which also includes wolverines, badgers, otters, and numerous smaller species. Fishers don’t usually appear on the pages of storybooks, nor are these elusive animals typically exhibited in zoos. In contrast to larger predators like bears and tigers, fantastical fishers are unlikely to frequent our dreams or haunt us in our nightmares, and even the most adventurous of these kids had presumably never thought about becoming a fisher biologist like Lewis, who gently encouraged them to take a closer look at his furry friend. But Lewis’s enthusiasm was contagious, and understandably so. This was a once-in-a-lifetime chance to meet a regionally extinct mammal, only minutes before it was to be reintroduced to the wild.

On a clear, cold morning in early December, I joined more than a hundred guests gathered at the North Cascades National Park Visitor Center in Newhalem, Washington, to celebrate the first release of fishers into their former range. Fishers have been missing from the North Cascades since they were eliminated by trappers in the early to mid-1900s. Ironically, the healthy animals transported to Newhalem that day had been caught by fur trappers, too — in this case, trappers working in the forested wildlands of Alberta, Canada. But these particular trappers had agreed to help with a collaborative effort to translocate 80 fishers to the North Cascades before the end of the winter. The preliminary release in Newhalem comprised a total of six fishers, included five hearty females and a young adult male named “Ron” (after Ron Weasley of Harry Potter fame), who lay resting in his box as visitors lined up to view him. 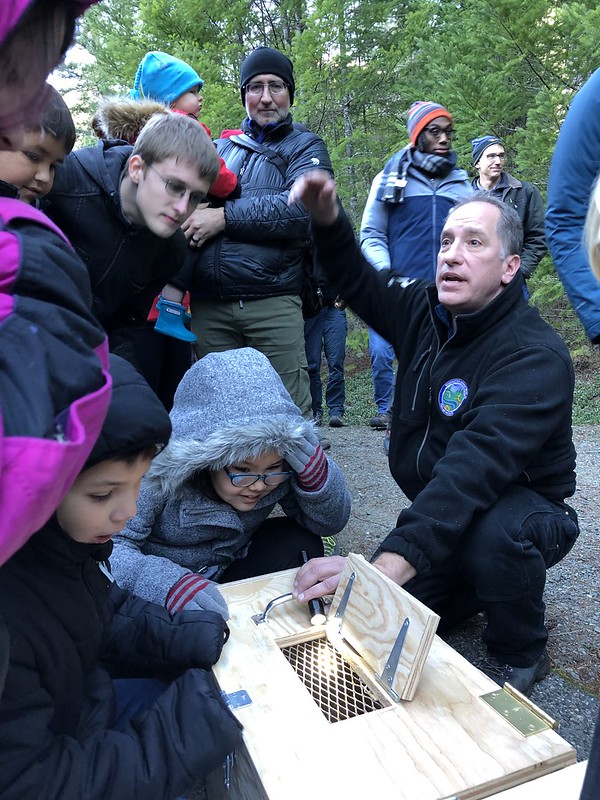 Jeff Lewis, a wildlife biologist with the Washington Department of Fish and Wildlife, introduces children to a fisher in Newhalem, Washington during an early December gathering to celebrate the first release of fishers into their former range in the North Cascades. Photo by Paula MacKay.

Why go to all this trouble to restore a 4- to 12-pound weasel to one of its previous territories? According to project leaders, the answer is multi-faceted. “People killed them so it’s the right thing to do,” said Jason Ransom, a biologist with North Cascades National Park, during his welcoming remarks in the visitor center’s auditorium. Ransom also cited his agency’s mandate for the recovery of endangered species, emphasizing that the big-picture reason for bringing back fishers is to restore biodiversity. “Our ecosystem is changing. We know that if you have a biodiverse community, you have a more resilient community.” Scientists increasingly highlight resilience as a key component of wildlife conservation in the face of climate change and other ecological threats.

Fishers are a forest-dwelling predator found only in North America. Post-European settlement, their historic range in the United States was dramatically reduced by trapping and logging; in Canada, they remain relatively widely distributed. But devastating fires this summer in British Columbia just north of Washington compelled the leaders of the reintroduction project to shift east to Alberta for a source population of fishers. They met with members of the Alberta Trappers’ Association, some of whom were ultimately hired to catch and deliver live fishers for the reintroduction. Next, they needed to find a place to temporarily house the Canadian fishers while they were being made ready for their release.

Turns out the Calgary Zoo was an excellent fit given its geographical location and the zoo’s expertise in community conservation. Zoo scientists designed a holding space especially for the captured fishers to prepare them for the final chapter of their relocation. The fishers were given extensive veterinary checkups and equipped with radio transmitters so that biologists can track their future movements in the North Cascades. Ransom said the partnership went so well that the zoo’s president and CEO, Clément Lanthier, flew down to Washington with the first batch of fishers to attend the inaugural release. “Our only criticism,” Ransom quipped as he introduced Lanthier at the event, “is that you’re making our fishers fat!”

Ransom called the fisher reintroduction a “massive community effort” and acknowledged co-leadership from the National Park Service, WDFW, and the regional nonprofit Conservation Northwest — whose Science and Conservation Director, Dave Werntz, concurred at the release that “the whole is greater than its parts.” Indeed, this unique team of partners, with additional support from other agencies, organizations, and Tribal entities, began the long-term initiative to restore fishers to Washington in 2008 with a successful, three-year reintroduction in Olympic National Park. More recently, from 2015 to 2017, they released 69 fishers into Washington’s southern Cascades (including Mount Rainier National Park), where reproduction has already been documented. The North Cascades Ecosystem is the last of three wild areas in the state to be slated for fisher reintroductions. 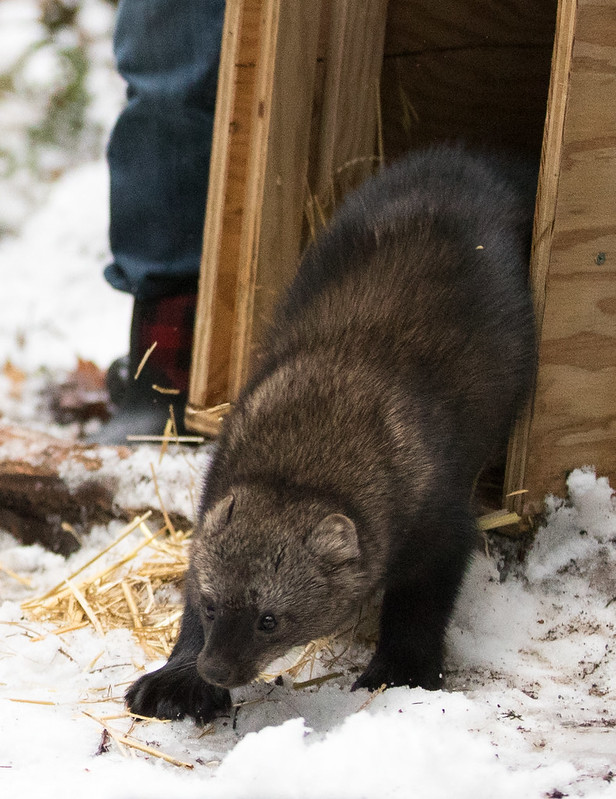 Between 2015 to 2017, wildlife officials released 69 fishers into Washington’s southern Cascades (including Mount Rainier National Park), where reproduction has already been documented. The North Cascades Ecosystem is the last of three wild areas in the state to be slated for fisher reintroductions. Photo by Paul Bannick/Conservation Northwest, 2016.

Newhalem is a traditional village site of the Upper Skagit Indian Tribe. During the Cascades release ceremony, the Tribe’s natural resource director, Scott Schuyler, expressed hope that we can return all native species to this region “because they’re all precious.” Schuyler’s sentiments were echoed by Frank Bob of the Lummi Nation, who said he was happy to “see us finally giving something back,” and that “Mother Nature is praising us today.” Bob was accompanied by Denise Solomon from the Lummi Nation School and a busload of schoolchildren who honored the event with two tribal songs. The singers, dancers, and drummers of the Lummi Blackhawk Singers filled the room with a sense of unity.

Later, the crowd now outdoors, the tribal performers sang and drummed wishes for a good journey as we watched the fishers freed one by one into the forest. The crate doors were opened by some of the children themselves, symbolizing the next generation releasing the next generation, as Ransom put it. The first fisher to be released, a female named “Tonks,” hesitated for a minute before she leapt from her box. Then, without looking back, she dashed across the forest floor and disappeared fast into the trees to carve out a new life. Each subsequent fisher followed virtually the same escape route, perhaps finding comfort in the scent of the one who came before.

Lewis and Ransom voiced a mix of joy and relief as the reintroduction event came to a close. “You’re on-point for a long time, and you want all these pieces to fall into place,” said Lewis, who was already thinking about the second release (which occurred last week). Ransom likened the experience to sending one’s kids off to school. “We take such good care of them — and we get to know them. Watching them run off, you just want to know, where are they going to find shelter tonight? Where are they going to find their first meal?”

I’m sure the fishers were relieved, too. As I helped carry Tonks’s empty crate back to the visitor center, I wondered what it would be like for her to suddenly find herself in an entirely new place, surrounded by a new suite of smells, tastes, and neighbors. She carries a heavy burden, this hand-picked pioneer. I only hope that, this time around, we will treat her and her offspring with the respect they deserve — and that when the Lummi Blackhawk Singers are all grown up, they can proudly say that the North Cascades are once again home to a viable population of wild fishers.

Paula MacKay is a freelance writer-researcher and field biologist, having studied bears, wolverines, and other wild predators for the past two decades. Paula served as managing editor for Noninvasive Survey Methods for Carnivores (Island Press, 2008) and earned an MFA in creative writing from Pacific Lutheran University in 2015. She has written for numerous conservation groups, books, and magazines. You can find more of her work at https://paulamackay.com.