How a Recycling Headache Offered an Opportunity to Help the Homeless

Recycling fanatic Tori Carle used to put all kinds of plastic out for recycling, including plastic bags. Then she became the city recycling educator in Greensboro, North Carolina. In that position, she learned that plastic bags and other plastic film wreak havoc in the recycling sorting process. Plastic bags frequently get tangled in the rotating machinery at materials recovery facilities, which sort mixed recyclables into various saleable commodities. Workers must stop the machinery almost a dozen times every day to remove the tangles. Sometimes the bags even break components of the machines. 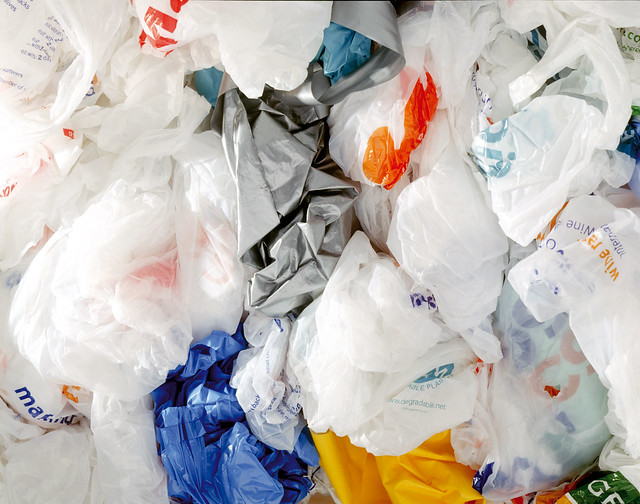 Photo by Wastebuster, Flickr Plastic bags are a recycling headache, but by turning them into plastic yarn, or “plarn,” they can be used for crocheting project.

Not long after, Carle discovered from the website Pinterest that plastic bags can be used to make plastic yarn, called “plarn,” which can then be crocheted for use in a variety of different projects.

When it comes to recycling plastics, most of the public focus is on shopping bags. Yet shopping bags are just one type of plastic film Americans acquire on a regular basis. Bread, frozen vegetables, cotton balls, newspapers, and dry-cleaning all come in various types of plastic bags. And almost any of it can be used to make plarn.

In the spring of 2016, Carle approached her boss with a novel educational idea: to organize the first of what turned out to be several workshops at library branches where she would teach people how to make plarn. To her surprise, 21 people showed up. According to Carle, the workshop participants had a number of questions for which she as yet had no answers: “Are we finishing anything to completion today, or are we working on something small we can continue working on at home? Do you have a pattern for it?” In response to their questions, Carle began to search Pinterest for plarn projects that could be easily replicated. One project in particular — posted by members of an Arkansas church who had who had successfully used plarn to crochet bedrolls for the homeless — excited the entire group.

In addition to tackling plastic pollution, the idea addresses a real and serious need. When people sleep on the ground, even if they have a sleeping bag, half of their body remains in contact with a surface colder than their body temperature, which can lead to hypothermia. While experienced campers know to use an insulating mat beneath their sleeping bags, homeless people lack the resources to acquire this extra layer of insulation. And even though donated cloth blankets may be readily available through many organizations that help the homeless, they can’t solve this particular problem.

Carle wondered whether she could replicate the Arkansas project in Greensboro. The class had liked the idea, but she wondered whether she could get enough others interested in making some of these mats. As she explained to me in an interview, “I had these questions that I had to have answered: First, is it easy to do? Second, could I get people excited about this? And third, how can I distribute these? So first off, I tried it. I started making a bedroll, and it was pretty easy. And I would say I’m a pretty beginning-level crocheter.”

She quickly developed a standard pattern: a 2½ x 6 foot rectangle with two straps for tying the roll, as well as a carrying strap. It takes 500 to 700 plastic bags to make one bedroll, which is a lot of plastic that doesn’t end up as litter or in the landfill. Plarn mats have other benefits as well. Each bedroll weighs only about five pounds. They’re also easy to clean and, unlike cloth blankets, they don’t attract bedbugs or lice.

In answer to her second question, Carle found that it was relatively easy to get other people interested in the project. Everywhere she went, she took her crochet bag and supply of plarn and continued working on a mat. Whether she was standing in line at a store or sitting in a waiting room, she crocheted. Unlike regular yarn, working with plarn makes a crinkly sound, which always attracted the attention and piqued the interest of the people around her. And when they asked what she was doing, she gladly told them.

That left the third question: how to distribute the finished product. It seemed presumptuous to just go up to strangers who appear to be homeless and offer them a bedroll. Then she had an inspiration. She had recently begun dating a policeman, and one night while they were at the movies she opened her crochet bag and began working on a mat. After explaining that she was making a bedroll for the homeless, he replied that he knew of someone who could use it.

“Of course,” she thought. The police in any town know who the homeless people are and how best to reach them. So in late May or early June 2016, she sent an email to Greensboro’s police chief to see if he was interested in the project. Within five hours she received a phone call back from a captain, and Operation Bedroll was born. 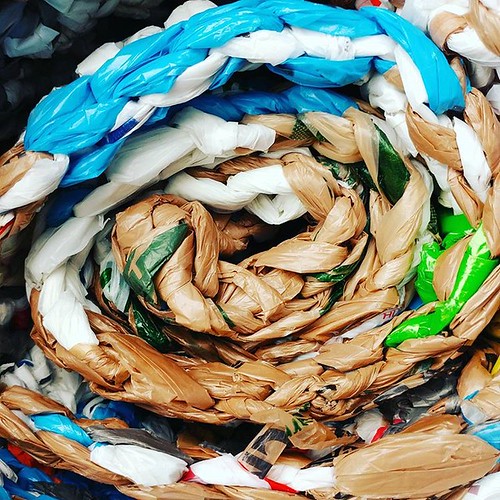 Photo Courtesy of City of Greensboro, NC Plastic bedrolls turn plastic waste into a source of insulation for
the homeless.

Operation Bedroll thus began as a partnership between the city of Greensboro’s Field Operations Department (which includes recycling) and its Police Department. The program also works closely with the Greensboro Interactive Resource Center, one of the first places newly homeless people go for help. Together, the three organizations set a goal of distributing 100 bedrolls by the first of October 2016 and a total of 200 by January 1, 2017. While the project failed to meet the first goal, it exceeded the second, with 211 bedrolls distributed. By the end of March 2017, Carle had collected nearly three-dozen additional bedrolls made by community volunteers.

When I asked her how many people were involved in making the bedrolls, she was uncertain. School groups, church groups, and both Girl Scouts and Boy Scouts all participated in the project. While some people either made only plarn or bedrolls, others made both. She estimated that at least 250 people crocheted, and at least 500 people made plarn. It’s a diverse bunch, too. Kindergarteners helped flatten and fold the bags to prepare them for cutting, while elderly people in assisted living or memory-care programs, as well as others people with special needs, made plarn for physical therapy.

How long does it take to make a bedroll? That’s difficult to estimate. Some high school students who make plarn or bedrolls for community service projects must keep track of their hours. One student, whom Carle called an exceptionally fast crocheter, made a bedroll in as little as 12 hours. For most people, however, she estimates that it takes anywhere from 15 to 40 hours of work to complete one bedroll. Apart from differences in their level of skill, the length of time can vary due to people’s preferences for how “perfect” or uniform they want the plarn or the bedroll to look.

Not surprisingly, Operation Bedroll generated tremendous local and regional news coverage. Carle soon began receiving many more invitations than she could accept to help other communities start similar programs, with inquiries coming from as far away as Arizona. In response to the demand, the city of Greensboro posted an informative tutorial, How to Start Operation Bedroll in Your Community, on its website.

In preparation for Operation Bedroll’s second year, Carle has started leading a series of workshops to teach more people how to make plarn and bedrolls, and another series to teach people how train others. Projects like Operation Bedroll can help both people and the environment as long as our society has plastic pollution and homeless populations.