The vast tar sands mines in Alberta, Canada have become infamous for the massive destruction they cause in the boreal region. Entire landscapes of forest, wetlands and meadows are stripped bare by giant earthmovers until the environment resembles the landscape of JRR Tolkein’s Mordor, in the words of Canadian environmentalist Maude Barlow. All of the tar sands mines — like any other oil and gas extraction projection in fossil fuel-rich Alberta — require environmental assessments before they can proceed. As do the contentious pipelines such as the Northern Gateway and Keystone XL planned to transport tar sands crude to ports in Canada and the United States. But there’s an crucial omission in the government regulations: There are no laws protecting rare and endangered plants in Alberta. As hundreds of environmental consultants fan out across Alberta for another field season, the regulations on what a company is obligated to do with their assessments are left in the dust. 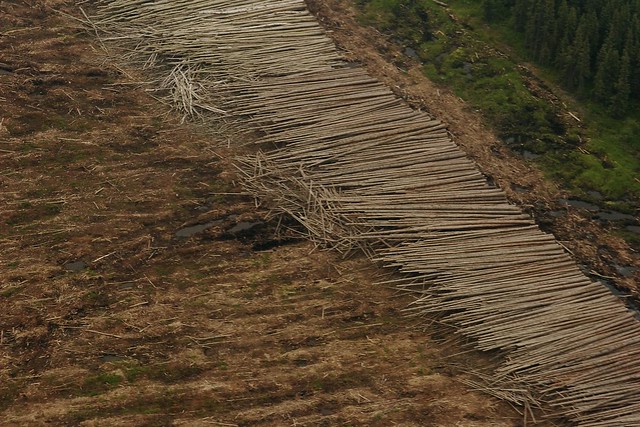 “There are two holes in the system,” says Laurie Hamilton, president of the Alberta Native Plant Council, the group that creates guidelines for the botanical surveys legally needed for environmental assessments and monitoring projects. One hole, she says, is that Canada’s Species At Risk Act only protects endangered species on federal land — national parks, First Nations reserves, and military bases. (In contrast, the US Endangered Species Act covers all properties, public or private.) The second hole is that there are no provincial laws that protect rare plants in Alberta. “There’s no coverage whatsoever,” Hamilton says. She says that plants on provincial land are managed only by best management practices, which are simply suggestions.

Hundreds of rare plants are found in Alberta. The provincial government’s list of at risk/sensitive species, which is updated every five years, includes about 500 species. The Alberta Conservation Information Management System lists plant species by rarity and decline, assigning them a rank from S1 (very rare with 5 or fewer occurrences in Alberta) to S5 (common and stable). The ACIMS list includes 442 rare plants.

The tar sands strip-mining, road building, pipeline and other oil-infrastructure development chews up more acres of wildlands every year, posing a serious threat to many rare plant species. These rare plants end up in the paths of the multitudes of energy sector projects and other infrastructure development projects. For example, Raup’s fringed gentian (Gentianopsis dentosa raupii), listed as S1, dwells in the wet meadows near the tar sands mining operations in northeastern Alberta. Also the tiny cryptanthe (Cryptantha minima), SARA-listed as Endangered, inhabits the southeastern grasslands along the route of the Keystone XL pipeline. When these plants, and countless others, are lost to development, the biodiversity of boreal forests and wetlands is compromised, and with it the overall health of the ecosystem. 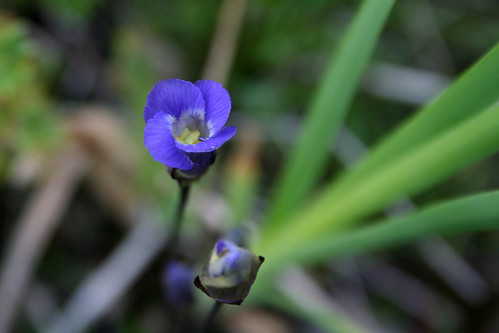 Photo by Kelsey BrockRaup’s fringed gentian (Gentianopsis detonsa raupii), which lives in the wet
meadows of northern Alberta near the oil sands, is an example of a rare plant
that is not protected by Alberta legislation.

Robin Gutsell, a biologist with the Species at Risk Program at Alberta Environment and Sustainable Resource Development (ESRD), explains that the Alberta Wildlife Act was designed to protect game species. Then it was extended to define endangered species, including “a kind of a plant, alga, or fungus,” but the remainder of the act refers only to game animals. “The only legislation that actively protects plant species in Alberta would be under Forestry, where certain trees cannot be cut down on public land without a permit,” Gutsell says, citing firewood and Christmas trees.

Why are more plants not covered by the Alberta Wildlife Act? “Plants can be, and are, listed under Alberta’s Wildlife Act,” Gutsell says. To become listed, species must be recommended by ESRD’s Endangered Species Conservation Committee, a multi-stakeholder group including energy companies, biologists, and conservation groups. So far, the committee has only listed the same 8 Alberta plants that are already covered by Canada’s Species At Risk Act. Yet the Alberta Wildlife Act does not specify any specific plant protection guidelines. Gutsell says “there are currently no protective regulations in place to prohibit any activities such as killing, disturbing, possessing or trafficking in plants.” 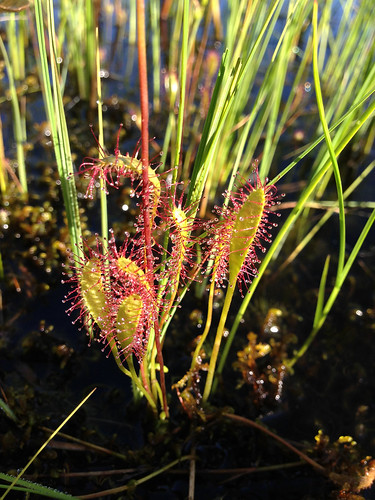 Photo by Kelsey BrockThe English sundew (Drosera anglica) lives in northern Alberta’s fens near
the oil sands and has an ACIMS rank of S3.

Some energy companies appear to respect the ACIMS list, but no law holds them to that. Currently, when a consulting firm gives a company a rare plant assessment, the company is not legally required to do anything about it. It’s up to each company to decide how to proceed. Each oil and gas project must go through what is called an “Enhanced Approvals Process” that involves environmental guidelines, but Gutsell says it “has few teeth if the proposed project is in range of a particular plant.” Gutsell says that the committee won’t list rare plants unless it is required to by law, for fear that listings it could impede the tar sands industry.

By contrast, animals on the Alberta Wildlife Act receive stringent legal regulations. A person or corporation cannot kill listed animals or “disturb or destroy a house, nest, or den of prescribed wildlife” without incurring a $100,000 fine per offense. For instance, industrial projects within the range of woodland caribou (Rangifer tarandus caribou) are legally required to have a Caribou Protection Plan that mitigates the loss of caribou habitat and barriers to their migration. Similarly, projects in southeastern Alberta within sage grouse (Centrocercus urophasianus) habitat must account for breeding grounds. The law also covers migratory game birds that aren’t endangered and, along with the Migratory Birds Convention Act, requires the tar sands mining companies to prevent waterfowl from landing on hazardous tailings ponds. How effective the protection is for animals is another matter; according to Kevin Timoney, an ecologist in Alberta, hundreds — perhaps as many as thousands — of birds die annually after landing in the tailings ponds. 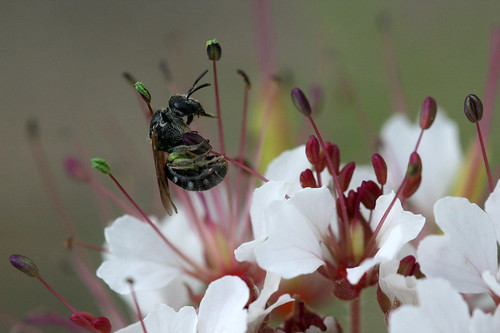 Photo by Jared BernardClammyweed (Polanisia dodecandra) lives on dry sandy embankments in
southern Alberta near the right-of-way for the Keystone XL pipeline and has
10 or fewer populations, but remains unprotected.

But plants get none of that protection. “I could find western blue flag and decree I’ve found western blue flag! and it doesn’t mean anything even with plants that are listed,” Hamilton says with a laugh. Western blue flag (Iris missouriensis) is an iris in southern Alberta’s prairies that’s as showy as its name implies; it’s one of the eight plants listed by the ESCC on the Alberta Wildlife Act.

“The Alberta Wildlife Act made space for a list [of plants], but at the present there is no regulation in place to protect those species,” Gutsell says. Ideally, she says, all wild species at risk would have the same protection.

Despite this, Gutsell explains, the ESCC won’t list rare plants unless it’s legally required because it could impede industry unnecessarily. Yet protecting them with legislation is especially imperative, because as the climate continues to change, many scientists expect that the ranges of plants will shift northward, and these northern populations contain the genetic material that will become necessary for these plants, and the local ecosystems, to survive.