Big Plastic, which stands to lose big profits, wants to get a referendum on the November 2016 ballot
Zoe Loftus-Farren

Governor Jerry Brown made history in September when he signed SB 270, making California the first state in the nation to ban plastic shopping bags. Unsurprisingly, the plastic bag industry isn’t going quietly into the night. Instead, it is trying to get a referendum on the November 2016 ballot that would overturn the ban. The American Progressive Bag Alliance (APBA), a group of American plastic bag manufacturers, is leading the referendum charge, working to collect the required 504,000-plus signatures by December 29 of this year. 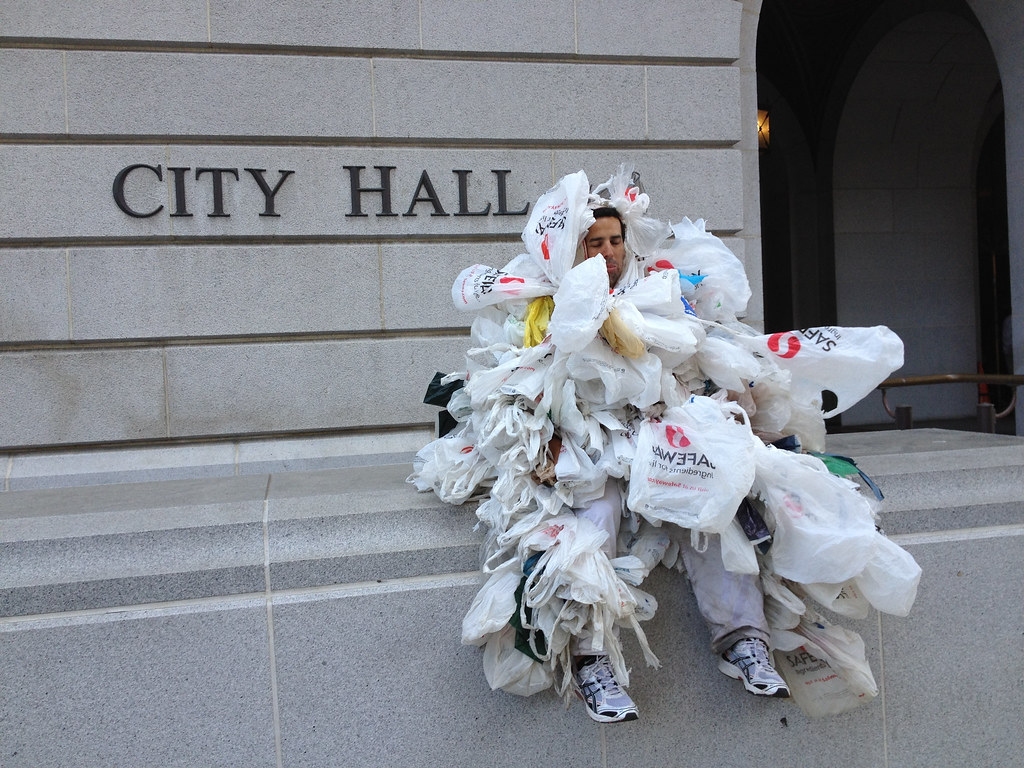 A man covered in plastic bags at a 2012 plastic bag ban rally in Los Angeles. Photo by Heal the Bay.

If the APBA fails to gather the necessary signatures, SB 270 implementation will begin in July 2015 with a ban on plastic bags in large grocery stores. Customers will also be charged 10 cents for a paper bag. And beginning in January 2016, plastic bags will be banned in convenience stores and pharmacies as well. The bill exempts low-income Californians using California’s food assistance program from the paper bag charge. Trying to ease the transition for bag manufacturers, the law also provides $2 million in loans to California-based bag manufacturers making the change to reusable bags.

If Big Plastic succeeds in placing a referendum on the ballot, implementation of SB 270 will automatically be delayed until 2017.

Californian’s Against Waste, a nonprofit dedicated to waste reduction, estimates that the plastic bag lobby has already spent $1 million on the referendum effort, primarily on paid signature collectors, and may end up spending as much as $3 to 5 million. The group has also received reports that paid signature collectors are misleading voters about the referendum. Job postings on Craigslist support this charge. One posting in Sonoma County, for example, offers $1.50 per signature, and reads: “I have a state referendum for voting on the plastic bag ban. It is basically to reverse the ban, but the way you pitch is to vote on it whether you want it or not.”

“Senator Padilla’s bill was never legislation about the environment. It was a back room deal between the grocers and union bosses to scam California consumers out of billions of dollars without providing any public benefit – all under the guise of environmentalism,” APBA executive director Lee Califf said in a statement.

There is no credible evidence to back up ABPA’s claims. Plastics have several serious and obvious impacts on the environment. For starters, they are made of non-renewable fossil fuels. They persist in the environment, failing to biodegrade in any meaningful timeframe. And plastic bags in particular are more likely to litter our streets and clog our oceans. “[Plastic bags] are very light weight, so they are easily blown around, they become litter very easily, they are very hard to collect for either disposal or recycling, meaning it is challenging to dispose of them responsibly,” says Darby Hoover, senior resource specialist with the Natural Resources Defense Council.

Hoover is also quick to point out that studies can show just about anything, depending on how they are designed. “You can find studies that will show you that plastic bags are better for the environment, that paper bags are better for the environment, you can find things that point in either direction,” she says. “It all depends on where you draw the assumptions of the study and what criteria you consider the most important.”

Common-sense criteria might include the ease of recycling, the feasibility of getting recycled content into bags, and the timeframe in which bags biodegrade, all of which point to paper bags as the better environmental choice. “We aren’t saying that paper bags have no impact, but plastic bags have greater environmental impacts that are more difficult right now to mitigate than paper,” Hoover says.

A coalition of SB 270 supporters, including environmental, business, consumer, and labor groups, have launched campaign in support of the ban, California Vs. Big Plastic.

Mark Murray, executive director of Californian’s Against Waste and treasurer of California Vs. Big Plastic, says the campaign has three primary objectives. The first is to educate consumers and the media about what the referendum really is, and the fact that the bag ban has already passed. The second is to define who the opposition is, namely out of state plastic bag manufacturers with deep pockets. And third, California Vs. Big Plastic wants to make it clear to the California business community that it will battle the referendum at every stage, with the goal of dissuading new businesses from joining the anti-ban campaign.

Even if the referendum does make it onto the 2016 ballot and delay implementation of the law, the APBA faces an uphill battle to overturn the ban. A recent Los Angeles Times poll found that 60 percent of Californians support a ban on single use plastic bags.

However, getting the referendum on ballot would be a victory in and of itself. “Once this qualifies, if it’s to qualify, it immediately suspends the law,” says Murray. “That’s the pay off, so to speak, for the plastic bag manufactures. Even if they lose at the ballot, they are probably banking on the fact that if they can postpone implementation [of the ban], even for 15 months, then they have the opportunity to continue to sell some 13, 14 billion bags into the state of CA.”