A version of this article appeared in two parts in Fish of Kamchatka Krai, a website dedicated to salmon advocacy.

Translated and adapted by Jennifer Castner.

One of the biggest threats to Russian rivers is mining. Mining causes the destruction of river valleys, loss of fish, and water pollution — as well as the devastation wrought by catastrophic failures of dams and tailing ponds.

In Russia, placer gold mining in particular is spreading like wildfire. This extractive activity mines riverbeds for gold deposits, rapidly disrupting whole riparian ecosystems. Muddy plumes stretch for tens, sometimes hundreds, of kilometers downstream from placer gold mining sites. Because of this, the natural chemical composition of water is disturbed, temperatures rise, water clarity and oxygen content decrease, and spawning grounds, especially for salmon, are flooded with silt. As a result, valuable fish abandon disturbed rivers, and the whole river ecosystem degrades, in many cases irreversibly.

In recent years, Russia’s federal Subsoil Resources Management Agency has worked with local governments to increase the number of placer mining licenses, particularly in Siberia and the Far East. These licenses are issued not on the basis of the fragility and value of a watershed, nor on the basis of the opinion of nearby and downstream residents, including Indigenous people who rely on these rivers for fishing, hunting, gathering, and the subsistence activities. Rather, governments see these “cheap” placer mines as an antidote to the country’s growing economic crisis and unemployment in remote regions. Local communities do not see any of the economic benefits from short-term mining operations devastating their riverscapes.

In the face of this gold prospecting invasion, some regional governments are resisting — insisting on their right to participate in the decision-making around the issuance of licenses. Others have taken another path: Kamchatka, the peninsula that juts into the North Pacific above Japan, has negotiated an agreement with Moscow for a moratorium on licenses until the region legalizes a network of protected areas and conservation zones to protect valuable rivers and salmon runs.

However, in order to understand the options for dealing with gold mining in Russia, it is useful to consider the history and scale of the problem and how various governments have approached it — both in Russia and in the country’s neighbors in Asia. China and Mongolia, with which Russia shares the Amur River basin, present particularly instructive examples.

China has firmly established itself as a world leader in the production and processing of gold. But along its border with Russia, China has significantly stopped placer mining. Until the late 1990s, thousands of small-time placer mining enterprises operated in northeastern China. Taiga streams and creeks in the Amur River basin were studded with dredges and other mining equipment. Then, between 1998 and 1999, several of the China’s largest rivers experienced significant flooding. The blame went to placer gold miners, alongside the logging industry.

The Chinese government reacted by issuing a total ban on placer mining in forest landscapes, shutting down all legal operations in the area. However, wildcat miners, around half of who were immigrants from southern provinces, were not willing to quit this lucrative industry. Their unwillingness triggered military operations, and the Chinese armed police worked for almost a decade to force these “black market” miners out of the forests of Heilongjiang and Inner Mongolia regions. 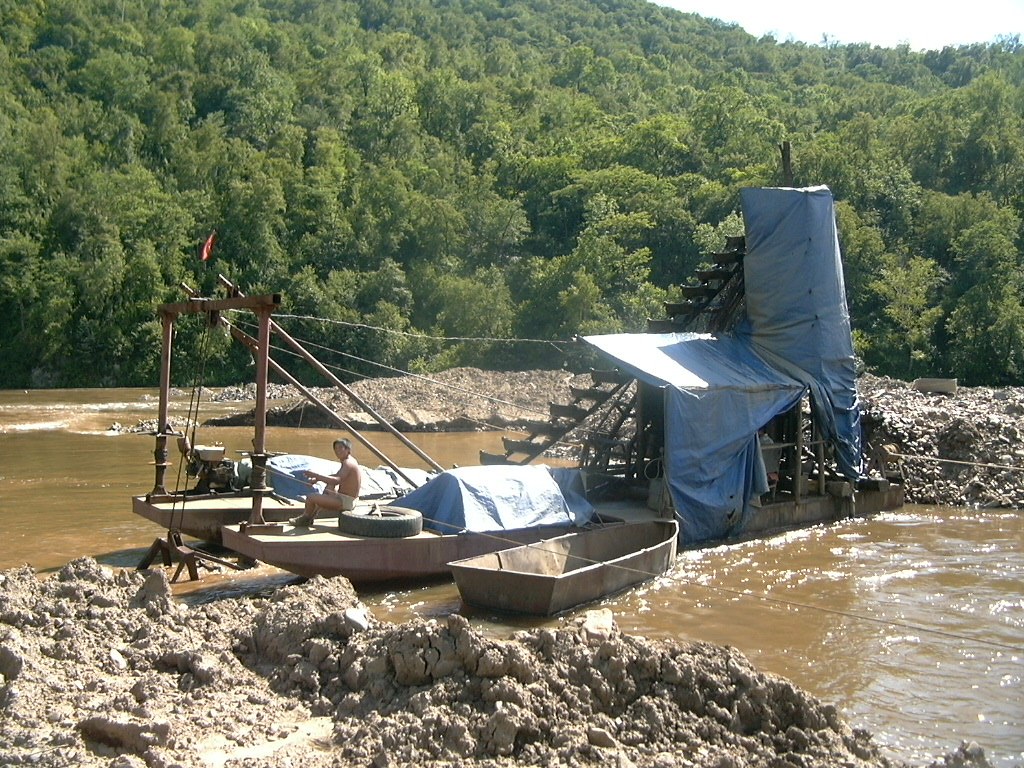 One of the last placer gold mining operations in the Chinese Small Khingan mountains. Along its border with Russia, China has significantly stopped placer mining. Photo by Eugene Simonov. 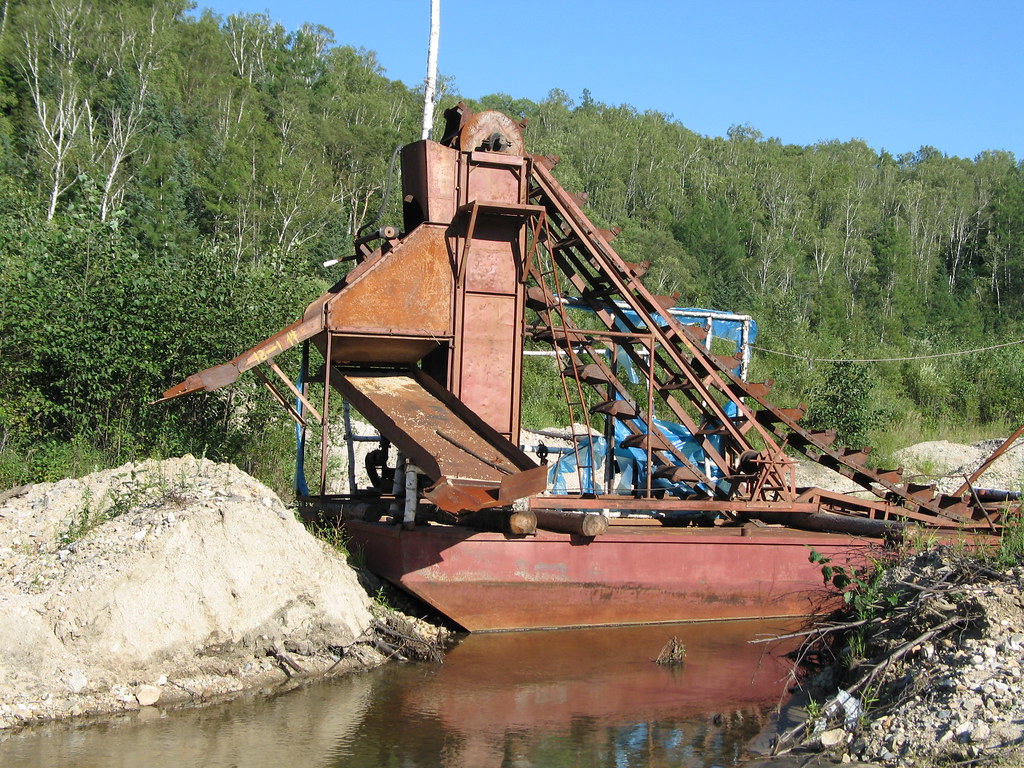 Placer gold mining equipment in a remote taiga stream in the Jewish autonomous region in the Amur River Basin. The equipment was likely moved across the border from China. Photo by Eugene Simonov.

The Chinese government simultaneously developed a program to subsidize local governments’ efforts to protect forests and rivers, which is now known as “payments for ecosystem functions.” These subsidies have become the main source of revenue for many forest communities, incentivizing them to eliminate placer-gold mining and replace it with alternative industries like mushroom production, fruit processing, and summer tourism.

Of course, China has been unable to totally eradicate placer gold mining. In some parts of the country, placer mining occurs in non-forested areas not subject to the ban, though under strong environmental restrictions (no riverbed operations). Another unsurprising result of the ban: much of the unused mining dredges and other equipment has been repurposed, in Russia.

Mongolia, too, has begun to defend rivers and lakes from destructive gold mining, though the country has an age-old commitment to protecting its natural resources. In Genghis Khan’s “Great Law,” he declared, “Execute all who dare desecrate rivers and springs, because in doing so they desecrate the sacred.” Due to the success of the Mongol leader’s conquests at the time, the heart of the Eurasian steppe had become home to significantly more people than could feed themselves. Imported goods and strict regulation of natural resources became required to support life, especially when it came to water. Genghis Khan’s ancient law thus protected rivers for centuries. At the outset of the twenty-first century, it became relevant again in the face of a globalized mining sector.

In 1997, private companies from Russia, China, and Canada invested in mining activity in Mongolia and bribed Mongolia’s bureaucrats to clear the way for their rush on minerals. Soon, mining licenses covered almost half of the nation’s land. From 2010-2012 until a catastrophic economic default, each Mongolian citizen was paid a share of these mining profits (approximately 20,000 tögrög, or $19, per month) to reduce public discontent with increasing social stratification and the destruction of the environment. Some residents nicknamed their country Minegolia.

Opposition to the mining rush soon became a national struggle when mining claims started separating nomadic herders from their traditional lands. Many families were forced to sell their livestock and either work for miners or move to cities, while the mining operations dried up rivers and fragmented wildlife habitat. Community organizers were sometimes victorious in temporarily saving rivers from license-holders, but the companies soon persuaded the courts to uphold their licenses and resumed work. In the end, community groups, including a coalition of activists called the United Movement of Mongolian Rivers and Lakes, took their advocacy to parliament. The movement eventually got a bill passed in 2009 that set aside protective buffer zones 500 to 1000 meters along rivers and large land tracts at river headwaters. These zones ban mining activity (excluding a few “strategic deposits that comprise a significant portion of the country’s economy) and if fully implemented should have protected around a quarter of Mongolia’s territory. Thousands of licenses, including placer gold mining licenses, were invalidated.

However, according to the new law, mining companies engaged in prospecting and extraction in the newly protected areas became eligible for compensation. In all, according to miners’ calculations, the government owed mining companies a staggering $4 billion, even though environmental and citizen rights activists claimed that none of these companies had performed proper land reclamation.

The United Movement of Mongolian Rivers and Lakes also spoke out against the slow implementation of the new law. In September 2010, Tsetsegee Munkhbayar, a 2007 Goldman Environmental Prize winner, and other leaders of the Movement protested gold mining on the sacred Mount Noyon, a historical burial site, while activists blocked mining at Burkhan Khaldun – another sacred mountain in Khentei Aimag – by locking up the mining equipment. They were arrested, though a number of government agencies and local administrations began working to reduce mining pressure on the rivers. Wherever possible and using any available legal pretexts, they withdrew or canceled exploration and operating licenses, significantly reducing their overall numbers.

Meanwhile, Munkhbayar continued his public demonstrations, including an armed demonstration in front of the parliament building in Ulaanbaatar, where he was arrested and sentenced to almost 20 years in prison as an “environmental terrorist.”

International environmental organizations then joined the struggle. In western Mongolia and along the Amur River, the World Wildlife Fund has put forward a new scheme for designing integrated river protection zones and has coordinated with local and federal authorities.

Today, seven Mongolian provinces have allocated more than eight million hectares of protected zones along rivers. These areas should ensure that on average 12 percent of each river’s watershed, across 43 percent of Mongolia’s territory, will remain free of destructive mines.

The Mongolian activists’ approach to river conservation is has yet to bear fruit on the ground. But if you consider existing political and economic instability, the progress Mongolia has made in this regard is already miraculous. The examples of China and Mongolia show that the state and the gold mining industry cannot only rely on conscious self-restraint of miners following general environmental regulations. It was preventive and advocacy measures that proved effective, not efforts to train miners to conduct “civilized business” according to “international standards”.

The fate of the rivers in Siberia and the Russia Far East depends on a similar level of integrity and engagement from local residents and conservationists who aim to save their rivers.

Eugene Simonov, a Russian conservation activist and researcher, is a co-founder and coordinator of the Rivers without Boundaries International Coalition, which is working across borders to support conservation of river and lake ecosystems as well as environmental rights of riparian communities.