Proposal could pose risk to local communities and wildlife
A version of this story originally appeared on the Baykeeper website.
Sejal Choksi-Chugh

The oil company Phillips 66 wants to increase the number of tanker ships carrying crude oil across San Francisco Bay to its refinery in Rodeo — from 59 to 135 tankers per year. They have also proposed increasing the average amount of oil unloaded at Rodeo from 51,000 barrels to 130,000 barrels a day. 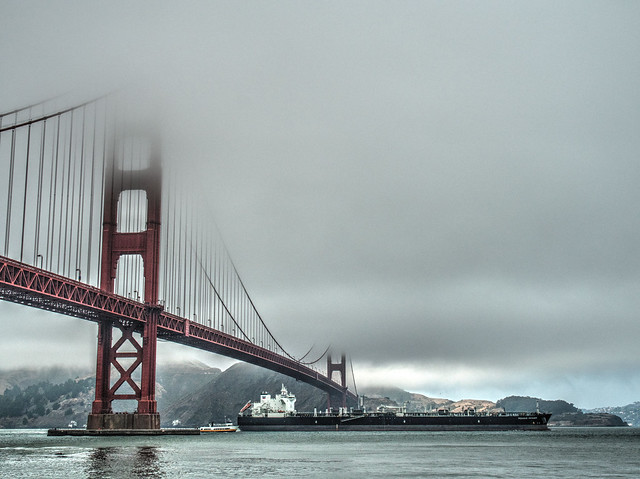 Photo by Jill/Blue Moonbeam StudioAn oil tanker crosses under the Golden Gate Bridge. Phillips 66 has submitted a proposal to increase the number of oil takers that can carry oil to its bay-side refinery by more than two-fold.

More than doubling the number of oil tankers would increase the risk of oil spills in the Bay. Oil spilled in the water can kill birds and other wildlife, make the Bay unsafe for recreation, and contaminate local beaches.

Plus, the company’s proposal raises other concerns. The increased tanker traffic would likely carry dirty, heavy tar sands oil from Canada. This type of oil is difficult, if not impossible, to remove after a spill.

In 2010, when tar sands oil spilled into Michigan’s Kalamazoo River, response crews were unable to completely remove the oil from the riverbed, even after five years of expensive cleanup efforts. If tar sands oil spilled in San Francisco Bay, it could harm wildlife in the water nearby and smother bottom-dwelling creatures that are critical to the Bay’s food chain.

The Phillips 66 refinery already has a poor track record of oil spills. In September 2016, oil was spilled there during the unloading of a tanker ship, causing large oil slicks in the northern San Francisco Bay. Over 100 residents near the refinery sought treatment at hospital emergency rooms for exposure to fumes that were later linked to the oil spill.

And then again, in September of this year, a small spill at the Phillips 66 refinery wharf left a 20 foot by 20 foot oil sheen on the Bay’s water. The impacts of small spills like this can accumulate and harm the overall health and resilience of the Bay and its wildlife.

Phillips’ needs a modified permit from the Bay Area Air Quality District to proceed with the expansion, and the district is beginning work on an environmental impact report for the proposal. Following that process, the board of directors will vote on whether to proceed.

In communities near the refinery, public opposition to Phillips’ expansion proposal is building. Baykeeper, a nonprofit advocating for the health of the Bay ecosystem, is working alongside community and environmental organizations to oppose any increase of oil tankers on San Francisco Bay. So far, over 24,000 Bay Area residents have responded to action alerts and told responsible agencies to reject the proposal.

A similar coalition effort succeeded in stopping two previous proposals for expansion of Bay Area oil refining. Along with partner organizations and many concerned community members, Baykeeper stopped Valero Energy Corporation’s attempt to expand its rail yard and bring more oil by train to its Benicia refinery. That proposal would have led to a risk of oil spills and possible accidents along the Bay shoreline and in communities near railroad tracks. Our coalition also stopped a planned crude oil storage facility that was proposed by the energy infrastructure corporation WesPac for Pittsburg.

Whether we live close to or far from a refinery, every Bay Area resident has a stake in the number of tankers carrying crude oil across the Bay. Our communities and many local businesses rely on a healthy Bay. And for wildlife that depends on the Bay, it’s a matter of life and death. By saying no to the risk of more oil spills on San Francisco Bay, we can make sure this place we call home is protected for future generations.