Our collective love for National Parks — “America’s best idea” — has unfolded over many generations and touched millions of hearts. This summer’s centennial of the National Park Service has invited us all to look back with gratitude and to envision the next 100 years. Looking ahead, we should expand opportunities for everyone to have direct contact with our parks. With that in mind, we’d like to introduce a powerful idea — that linking our national parks and national trails can allow for an even deeper experience of our beloved public lands.

America’s trails elevate the experience of visiting our parks to something beyond just driving through a gate and taking in the views. Our parks contain countless special places that naturally evoke elation, awe, and solace in visitors. Trails are the fundamental medium to explore these places with intimacy, thus deepening our relationship with parks. 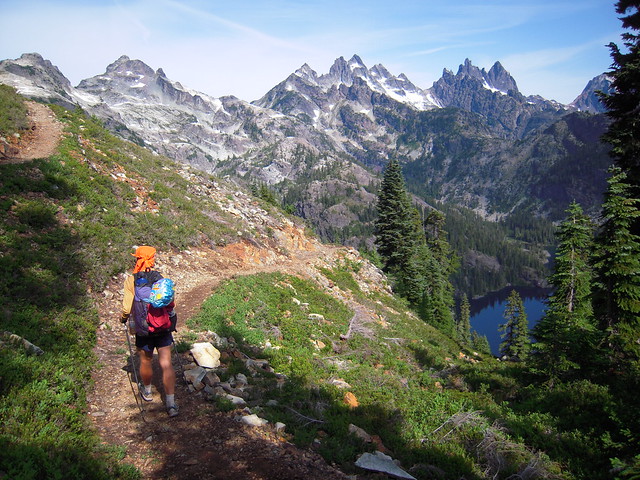 Photo by Asaf antman/FlickrThe Pacific Crest Trail travels through six different national parks during its 2,650-mile journey from Mexico to the Canadian border. Whether it’s a thru-hiker’s multi-month sojourn or a day-hiker’s afternoon of peace, insight, and delight, trails connect us all to the land.

In 1917, the National Park Service’s first full year of operation, 101 million people lived in the United States. In that same year, national park visitors totaled less than half a million, or 0.45 percent of the country’s population. Our relationship to our parks unfolded slowly at first, but during the 20s and 30s a colorful courtship emerged. Aesthetic champions like Ansel Adams and the iconic illustrated posters of western parks, beckoned us to “See America”.

By World War II, the percentage of us visiting National Parks had increased over thirty-fold, reaching 15 percent of the national population. Our desire for national park experiences was but whetted.

For 40 consecutive years, national park visitation increased virtually uninterrupted. From 1946 to 1986, visitation swelled from 15 percent of the American population to 17 percent more than the national population. Our relationship with our parks thrived. The intensity of the honeymoon peaked in 1987 when we reached a crest of 119 percent of our population, equal to 287 million visitors in a nation of 242 million.

Yet, on the centennial anniversary of the NPS, there’s a sense that we’ve slipped backward in our contact and connection with our public lands. The data agrees. Since 1987, our visitation numbers have dropped and fluctuated. In fact, only in 2014 and 2015, did our gross total of visitors crest that figure of 287 million set nearly 30 years ago. What’s more, since the 1980s, a growing proportion of park visitors have actually been from abroad. Sadly, we haven’t crested the 100 percent visitation threshold since 2000. In fact, in 2013, park visitation numbers were equivalent to just 86 percent of the US population, marking a 40-year low!

So the question, as it so often becomes, is how can we restore this relationship?

One answer may be at our doorstep, and it goes beyond celebrating the centennial of the National Park Service. Two years from now, another system of national treasures will reach a milestone, offering exactly the opportunity we need to renew our vows with federally protected lands.

In 2018, America will celebrate 50 years of the National Trails System. Established by an act of Congress in 1968 to celebrate the American outdoors with carefully selected scenic and historic routes, the system unifies two disparate categories: long distance trails such as the Appalachian Trail and historical pathways like the 4,000 mile journey of Lewis and Clark across the West.

While national parks offer perennial destinations we are all familiar with, national trails take those experiences and extend them thousands of miles further across America.

“If national parks are America’s crown jewels, then the national trails provide an emerald necklace that stitches them together,” says Steve Elkinton, program leader for the National Trails System from 1989 to 2014. “Along the 30 national scenic and historic trails, over 80 National Park Service sites are linked and these national trails connect to over 100 national forests, 400 state parks, and other preserves all across the country.”

Most of America’s 30 national trails are administered by the National Park Service. Eleven of these routes are designated as scenic trails and 19 as historic trails. Visitors in a national park may not realize they stand a few feet from a trail that is 3,000 miles long. In Yellowstone, for example, the Continental Divide National Scenic Trail winds through the center of the park and hundreds of hikers follow this route each year from Mexico to Canada.

Over 50,000 miles of national trails are spread across the nation and these routes pass through 49 states, inviting all of us to step outside our normal routines and experience unique pathways that connect our diverse lands. It’s possible to walk for just an hour on a trail like the Appalachian and have an intimate, unforgettable experience. The Pacific Crest Trail travels through six different national parks during its 2,650-mile journey from Mexico to the Canadian border. Whether it’s a thru-hiker’s multi-month sojourn or a day-hiker’s afternoon of peace, insight and delight, trails connect us all to the land.

Urban areas aren’t left out of this treasured selection of pathways. More than 20 major cities across America feature voyages into the history of the nation. San Francisco hosts three national trails within its city limits. One of these routes, the Juan Bautista de Anza National Historic Trail, retraces the 1776 journey by Spanish explorers to establish the Presidio of San Francisco.

“National historic trails tell a different story, looking at America’s heritage by the movement of its people instead of just at one site,” says Naomi Torres, superintendent of the Anza Trail in San Francisco. Washington, DC also has several examples, such as the aquatic Potomac Heritage and Captain John Smith trails — both of which can be explored by kayak or canoe.

“With national parks it’s about real estate,” Torres says, “You go and experience a place. But with national trails, it isn’t just about going to one place, it’s actually movement along the path that becomes significant.”

The Heart of the Andes by artist Frederic Edwin Church (1859)An archetypal landscape image that philosophy professor Denis Dutton refers to when he notes that among landscapes, trails are the sole manmade feature that humans find universally attractive

A just-completed nationwide study of over 200 urban parks showed that of all infrastructure available to visitors, walking paths were most highly correlated with park usage.

Interestingly, the roots of this correlation may go back farther than we might imagine. Denis Dutton, author of the The Art Instinct and professor of Philosophy at the University of Canterbury, has studied beauty, searching for patterns of images that are regarded as universally beautiful across world cultures. For landscapes, he says, the formula is clear: an elevated view of the land, prodigious green grass, a spotting of forest, a water source, evidence of wildlife and… a trail leading into the scene. Dutton believes that evolution has conditioned us to see these attributes as beautiful. Fascinatingly, among landscapes, trails are the sole manmade feature that humans find universally attractive.

The metaphor of a nation’s love for its parks hinges on viewing the parties involved as “The People” and “The Parks,” en masse and aggregate. Yet, the thrill of discovery, the enchantment at the beauty, the solace, and the sense of belonging that we often experience in parks is fundamentally personal and intimate.

A most intrinsic feature of trails too, is their inherent intimacy. One cannot get to know all of Yellowstone from a picnic at Old Faithful beset with bustling crowds, just as one can’t really learn much about someone by merely scanning their bio and a few hand-picked photos. Instead, just as a patient, meandering conversation traces the unknown contours of another’s heart and mind, so do trails invite novel contact and awareness with formerly undiscovered facets of the land.

This century holds great potential to deepen our connection to a robust catalog of parks around the globe. In the case of national parks, the world was quick to adopt “America’s best idea”: From 1872 to present, the US created 411 national parks and monuments. Worldwide, from 1882 to present, 169 different countries created at least 3,000 national parks. 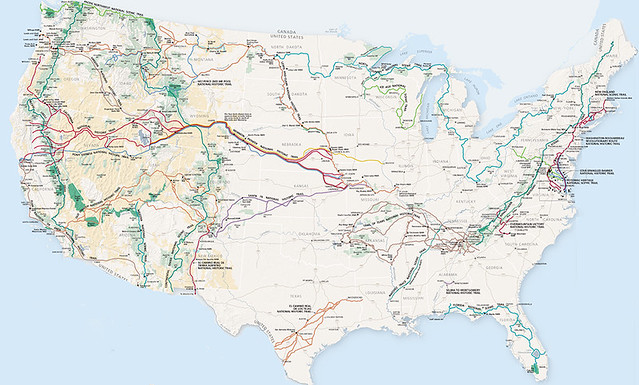 In contrast, a worldwide investment in trails is just beginning. The US began in 1968 with two trails (the Appalachian and Pacific Crest Trails) and in the subsequent 48 years, added 28 more. Internationally, following the United Kingdom’s groundbreaking 1965 designation of The Pennine Way — a 267-mile national trail along the “backbone of England” — a lean cohort of about 20 countries has designated a total of approximately 90 national trails, while many more lie in planning or await designation.

Our biosphere is vulnerable to the whims or wisdom of our collective culture. Our success at finding ways to explore, understand, converse, and connect with nature has never held such consequence. An investment in trails, whether with your footsteps or your wallet, is an investment in the relationship, the ancient reciprocity of man and nature, the modern symbiosis of the Parks and the People who steward them, and the intimate process of a person understanding a small swath of the earth. All of these aims are enhanced by trails, the fundamental medium to converse and connect with Place.

As we reflect on our heritage of national parks, let’s also imagine the path forward. What will the next 100 years of national parks look like? We believe it will involve trails in a fundamental way. Whereas the twentieth century served to establish hundreds of parks, ushering in a love for wilderness and open spaces, perhaps the twenty-first century can be a century of trails, an era of enriching our relationship with our parks. Join us in this year’s celebration of the National Park Service centennial — and again in 2018 for the celebration of our national trails.

Zak Klein is the Director of Global Trails Alliance, a project of Earth Island Institute. He is developing a series of internationally focused projects to inspire us through digital media. His work involves charting the power of trails to transform people as well as exploring the origin of trails by story telling about the visionary people that create and care for them.

Bill Buck is a veteran environmental activist, author, and digital media entrepreneur. He embarked on a series of cross-country trips from 2011 to 2015 exploring all of America’s national trails and is publishing a guidebook to all 30 scenic and historic trails, the National Trails Guide.