Behind towering acacia trees that provide much sought after shade in the sunbaked landscape of southern Ethiopia lies the story of a long quest for lasting peace by communities at the Kenya-Ethiopia border, led most recently by a group of community elders. The region has suffered from decades of longstanding conflict over limited resources that have claimed thousands of lives and displaced tens of thousands of families, and which have recently been exacerbated by drought and changing weather patterns. 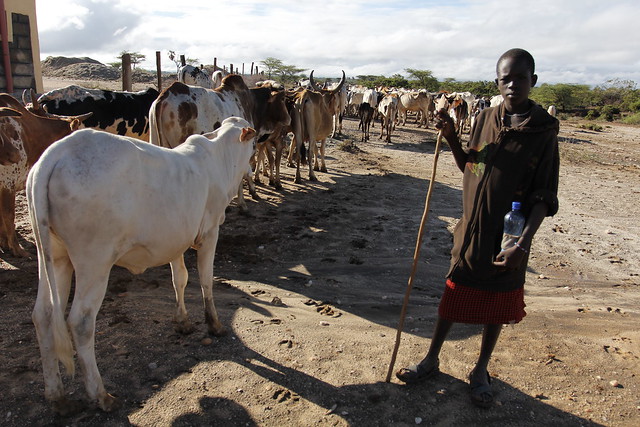 The conflict, pitting communities in southern Ethiopia and north-eastern Kenya against one another, has historic and cultural roots. Theft of livestock has traditionally been hailed as a symbol of status and dominance in the region. Each community tries to demonstrate its might based on the number of livestock it can steal from rivals, and how many neighboring young men it can disarm and control. As a source of wealth and status, livestock is also used in payment of dowry — a young man without enough livestock will struggle to find a wife.

But the conflict has taken a new and complex twist in recent years as rains have failed and weather vagaries have taken a toll on pastoralists’ way of life. The 2011 and 2012 drought in the Horn of Africa, for example, impacted more than 13 million people, particularly pastoralist communities, and contributed to an intense food crisis in the region. Dwindling land for pasture, coupled with lack of water, is pushing pastoralists from their homes to new frontiers perceived to be resource rich. Climate change is likely to continue exacerbating challenges in the region — in East Africa, global warming is predicted to cause more severe and frequent droughts, increased desertification, and more intense extreme weather events.

The scramble for the scarce resources has sparked deadly conflicts that claim, on average, 200 lives each year in East Africa, according to Dr. Celestine Muchoki, who specializes in conflict resolution at the University of Nairobi’s Institute of Diplomacy, and has been active in the peace negotiations among pastoral communities in East Africa. In Kenya for example, the conflict displaced an estimated 164,457 local residents in northern Kenya between 2002 and 2012, 70 percent of whom were women and children under 14 years of age, according to a study by Practical Action.

Borana, Gabbra, and Turkana communities form the bulk of the pastoralist community in northern Kenya, and have engaged themselves in episodic cattle “rustling” attacks, as have Oromia and Somalia, two of the largest pastoral communities in southern Ethiopia. Such conflicts mutate, crossing borders as communities seek to outdo each other. Matters are also aggravated by the fact that the Kenyan-Ethiopian border is a vast open landscape with no visible boundaries or barriers, which means that pastoralists from both countries can comfortably cross to the other and mete out violence before retreating.

In one instance at a water source near the border last year, a woman belonging to the Borana community was tending to her herd of cattle with her three children. Pastoralists believed to be from the Oromia community attacked them, shooting them indiscriminately before taking their livestock and securing the water point. Weeks later, the Borana killed five Oromia pastoralists in retaliation. “Such is the vicious cycle which has become bloodier as failed rains shrink rangelands. It has been hard to get long lasting peace as the level of mistrust among the various communities goes way back in history,” said Muchoki.

But an association comprised of elders is slowly healing the wounds of the longstanding conflict and breathing new life into efforts to attain peace among the warring communities. The Oromo Pastoralist Community (OPA), founded in 2006 by elders from both the Ethiopian and Kenyan side of the divide, began as a loose outfit, but has metamorphosed into a citadel of peace, arbitrating major land disputes and providing wisdom on how dwindling resources can be shared.

Representatives from pastoral communities at the heart of the conflict select representatives, or delegates, for the OPA, who gather either under tented camps or under acacia trees to chart practical solutions to solving conflicts. So important are the conversations that delegates trek for up to eight days just to get to the meeting point. So far, the meetings have produced far-reaching results, including the silencing of guns and a peaceful co-existence. “The discussions and agreements we make at the meetings are binding,” said Haji Ibro a delegate representing the Oromia community. “That is why there is always room for anyone opposed to any of the resolutions to voice it in the course of the meeting. A lot of negotiation and ceding grounds takes place, but at the end of each meeting we all have to come up with viable solutions if we are to keep our people alive.”

Such resolutions borrow from traditional conflict resolution mechanisms, and include requirements that anyone who takes a life pay a fine of thirty heads of cattle. A thief must payback five heads of cattle for every one stolen.

As the battle for water resources intensifies, the association has devised a way of marking water points to indicate the rightful owners and stem potential conflict. Once a pastoralist or a community identifies a water point — say a borehole — a cow is slaughtered and the water source marked with blood. This is a sign to ward off other pastoralists who might want to claim the borehole. It also sends a signal that deforestation around the water source is prohibited — the association attaches great importance to trees, which they believe cause rains and increase water levels at the protected sources.

“Such an agreement is binding,” said Eba Negasu, a delegate who represents the Borana community. “We have seen such interventions working as delegates communicate to their members their role in respecting someone else’s resources.”

Communities have also agreed on a rotational grazing system that allows mapping of unique rangelands where pastoralists can graze their cattle during dry days. Such enclosed areas are set aside for shared use among different communities when the rains fail and water resources are scarce. These agreements are captured in the reciprocal resource use agreements, a set of customary inter-ethnic treaties that govern how limited resources are to be shared.

OPA has also advised members to reduce the number of livestock they own as the first step in adapting to changing times and reducing overgrazing and soil erosion. A typical Borana family would, for example, traditionally own 1,000 heads of cattle. “This has now been reduced to, on average 500, as the association successfully convinces pastoral families on maintaining few livestock that gives them great output,” said Chief Mesmin Mohammed, one of OPA’s leaders. “It hasn’t been easy, but the trainings are bearing fruit and more communities have embraced the idea.” In the last two years, resource related conflicts have gone down by 70 percent, a decrease largely attributed to OPA interventions. “We intend to make sure that the sound of guns is history in this area, and we have seen we can do it,” Mohammed added.

Such roaring success has inspired the adoption of OPA’s model in Somalia, a country also struggling with resource-related conflicts. Under the Somali Regional Pastoral Council, more than 200 pastoralists in Somalia have learned to adapt to a changing climate through sharing limited pasture and water for their livestock.

The efforts of Oromo Pastoralist Community haven’t escaped global attention. This year, the association was been awarded the Equator Prize, a global award that fetes outstanding community efforts in reducing poverty, protecting nature, and strengthening resilience in the face of climate change. Selected from a pool of 1461 nominations spread across 126 countries, the pastoral group was recognized for its spirited efforts at peace building, its prowess in solving land disputes, and its active role in teaching its members traditional and low cost techniques of adapting to changing weather.