Passive Carbon Capture Can Clean Up Our Air, But the Technology Lacks Popular Support

Trees are great filters. Wind, sunlight and photosynthesis enable trees to “scrub” carbon dioxide from the atmosphere, while replenishing it with oxygen, which almost every life form needs to survive. But there simply aren’t enough trees around to scrub out the surplus carbon we have in our atmosphere right now which is steadily changing the delicate balance of life on Earth. 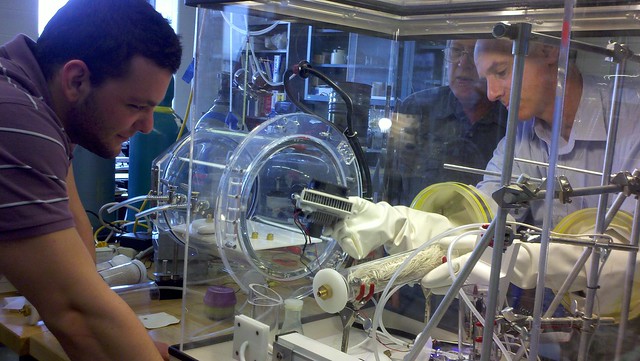 Human beings have put an estimated 450 – 500 gigatons of carbon into the air, primarily by burning fossil fuels, according to James L. Buizer, a professor in the School of Natural Resources and the Environment at the University of Arizona. Each year we pump another 30 billion tons of carbon dioxide into the air. The United Nations projects human population will surpass 9 billion by 2050, so energy use will only increase.

Researchers across the world have been working to develop technologies that can remove this excess carbon from the air. One such technology — passive carbon capture — holds much promise, but skepticism about the process and lack of support from policymakers have slowed the development of what could be a cost-effective approach.

To people proposing sustainable energy alternatives and lifestyle changes, removing CO2 seems pointless. Removing a substantial amount of carbon from the air requires a great deal of it to be filtered. Heating, cooling, or pushing air through a filtration process requires the use of energy, thereby creating more carbon emissions.

But some scientists have demonstrated that carbon can be passively removed from the air without creating further emissions. Klaus Lackner, a geophysics professor at Columbia University and his team have developed a “fake tree” carbon collector.

An early effort used plastic “leaves” coated in resin that traps carbon particles in the air. The newer passive carbon-capture devices look more like furnace filters with straw-like tubes dotted with holes, packed closely together inside a metal frame. The devices necessary to collect one ton of carbon per day would fit into a standard shipping container that, once opened, would require approximately 60 square meters of area. Set up in a location facing into a slow wind, the devices would come into contact with carbon in the air. A faster wind would mean a greater amount of carbon would be captured more quickly. Because no power source is needed, no new carbon emissions are created.

Because this process is so simple, the devices can be set up virtually anywhere. If the structures are perceived as ugly or unwanted by neighbors, as with modern windmills, they can be placed in a windy spot away from human habitation.

The most significant challenges to implementing this technology include, making the process cost-effective and figuring out what to do with the carbon removed from the atmosphere. 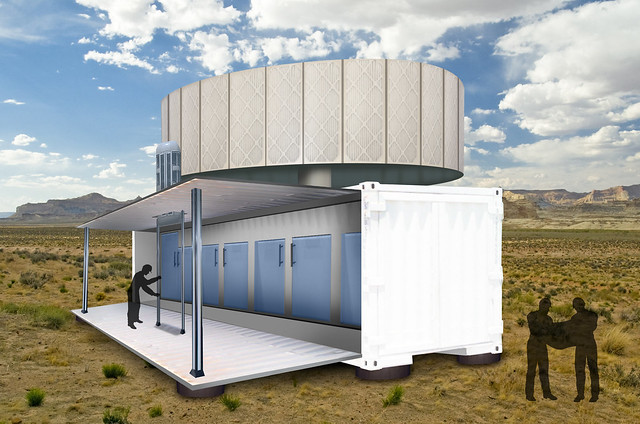 Photo courtesy GRT, 2009A rendering of a self-contained passive carbon capture unit made with a shipping container.
Containers like theset could be set up anywhere.

In 2011 the American Physical Society (APS) released a report about one direct-air capture (DAC) process that used mechanical blowers powered by electricity and used a chemical to extract the carbon and store it. The APS put a price tag of $600 per ton on the process while acknowledging; “No demonstration or pilot-scale DAC system has yet been deployed anywhere on earth.”

“This is like proving that penguins can’t fly,” Lackner says. “I looked at it myself and concluded it’s more like $1,000 a ton.”

The report had a chilling effect, making it virtually impossible to get funding for any kind of large-scale research, according to Lackner.

Lackner initially worked with Kilimanjaro Energy, a startup company trying to figure out how to make air capture possible. The company claims it has a developed a process that would cost $100 per ton of carbon removed. While he sees that as plausible, Lackner believes his process would cost even less than that.

“If I look at the raw resource costs which go in – I need to pay for energy, for materials – that’s very, very small,” he says. “I think it’s well below $50 a ton of CO2, so I don’t think it’s impossible over time (that) costs could come down into that range.”

Where to put the collected carbon? Lackner advocates burying it deep in the earth – geological sequestration, an idea not well liked by some environmental groups.

“Air capture makes it more palatable because I could do my storage far, far away from where people live,” he says. “Whereas, if you have a coal-fired power plant, that’s presumably near a city because it needs to service that city. It becomes expensive to (move) the CO2 very far away.”

There are other options.

First, reuse the captured CO2. While there are industries that use CO2 to fill fire extinguishers and manufacture dry ice, this small demand won’t come close to exhausting the surplus. And the emissions and environmental impact from those manufacturing processes might not make reuse a viable alternative. A more realistic option is to use recaptured carbon in the manufacture of biofuels. An example is capturing carbon released by burning coal in a power plant. The carbon is used to feed algae to create vegetable oil that can be converted to biodiesel or hydrogenated to jet fuel; the leftover vegetable material can be converted into cattle feed.

Second, mimic nature by speeding up the transformation of the carbon into another form: carbonates. Carbon and water combine to create carbonic acid; when the acid finds a base, it forms salt, most often in solid form. Limestone, dolomites, magnesium and calcium carbonates, for example, form at a very slow rate. But according to Lackner, this option is still too cost prohibitive to be done on a large scale.

Regulating the removal of carbon wouldn’t require international negotiations such as those related to the United Nations Framework Convention on Climate Change that have been underway since 1992, according to J. Michael Hall. The former director of the National Oceanic and Atmospheric Administration Climate Program Office says obtaining consensus about the treaty is proving too difficult.

“Carbon capture of the sort Klaus is advocating is planetary hygiene,” Hall says. “It’s picking up Dixie cups and throwing them in the trash… taking corrective action (of) relatively known consequences and accepting responsibility to do it to.” Carbon sequestration is something any country can do on its own, he says.

“There are policy or policy-related actions that we can and should be taking in exploring [the] technology of sequestration,” Hall says. “Capture is one. Exploring the technology of sequestration is another. There are mitigation effects that can be undertaken. [President] Obama’s attempt to put out somewhat systematic steps that will at least improve the emission situation in the United States is an example of the things that need to be undertaken – not only by us, but by others.”

Hall’s primary concern is having the data necessary for informed choices.

Some of the areas that require study include the amount of carbon to be removed – do we only remove the carbon that goes in starting now? Do we begin taking out some of the carbon already in the atmosphere? If so, how much? What regulations are needed to maintain the right level?

Dan Sarewitz, co-director of the Consortium for Science, Policy and Outcomes at Arizona State University, believes carbon capture and sequestration will give parties fighting about climate change a way to come together to spur constructive action.

“What we need is options,” he says. “We need to get this stuff going to scale, see how it works, see what the costs are going to look like and whether it’s viable as a large-scale initiative. And until we do that, it’s going to be hard to say much more.”

But Lackner says that first there needs to be more meaningful research into carbon capture technologies.

But that doesn’t sit well with either the fossil fuel industry or environmentalists.

“The energy companies don’t like me because I’m forcing them to do something. The environmentalists think I just gave the world a ‘get out of jail free’ card. So I’m not liked by either side,” Lackner says. “In the end, we have to get there and we have to figure out where to put all that CO2, which is not all that easy.”