A single aspen, thought to be the largest living organism on Earth, offers a message of diversity, resilience, and sustainability. It’s up to us to heed its message and avert its decline.
Paul C. Rogers

As a child, I was captivated by the imagery of Jonah in the belly of a whale, swallowed whole, his voice echoing in the dark cavern of a single immense creature. Such imagery seems fantastical, yet strangely tangible to my current worldview. You see, I’m an ecologist trying to assess the measure and mystery of human-forest connections. One of my subjects is the iconic Pando aspen clone in southern Utah — a colony of a single male quaking aspen thought to be the largest living organism on Earth weighing in at 5.8 million kilograms (13 million pounds), equaling the mass of 40 blue whales.

But the lessons of Pando extend far beyond matchless monikers.

Aspen forests have a global reach. Like Earth’s original continent, Pangea, lasting aspen entities emanate and evolve from a single form. Yet these bodies bring seemingly disparate parties together; they honor and encourage diversity; they facilitate intricate linkages and build lasting networks. Pando comprises an estimated 20,000 kilometers (12,427 miles) of interconnected roots — a distance equal to half of Earth’s circumference — and acts as a symbol of community and resilience even in the face of divisiveness. How might the messages of aspen’s survival inform Earth-human linkages from Pando to Pangea?

To walk through Pando invites a beetle-in-a-garden viewpoint. The massive grove is humbling. Yet, we humans are dismantling this masterpiece of nature seemingly one bite at a time. Pando (Latin for “I spread”) is a single aspen grove — technically a clone — comprised of some 47,000 genetically identical stems and spanning 43 hectares (106 acres). Though we cannot yet accurately estimate its age, it may be as old 14,000 years, born when the last ice sheets receded.

The Pando aspen clone in Utah spans 43 hectares and is composed of an estimated 47,000 genetically identical stems linked by a dense root network. This ‘one-tree forest’ remains in green leaves while surrounding clones have changed to yellow in early autumn Photo by Lance Oditt. 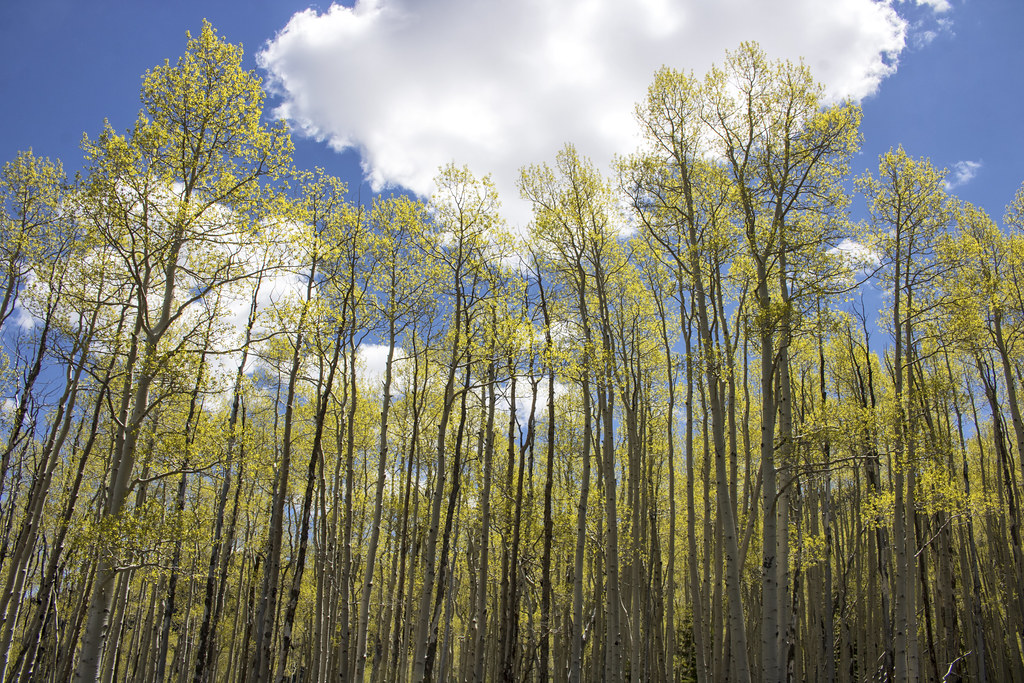 This ancient colony is breaking up due to various factors including mishandling on behalf of wildlife, recreation, and ranching interests. Photo by Lance Oditt. 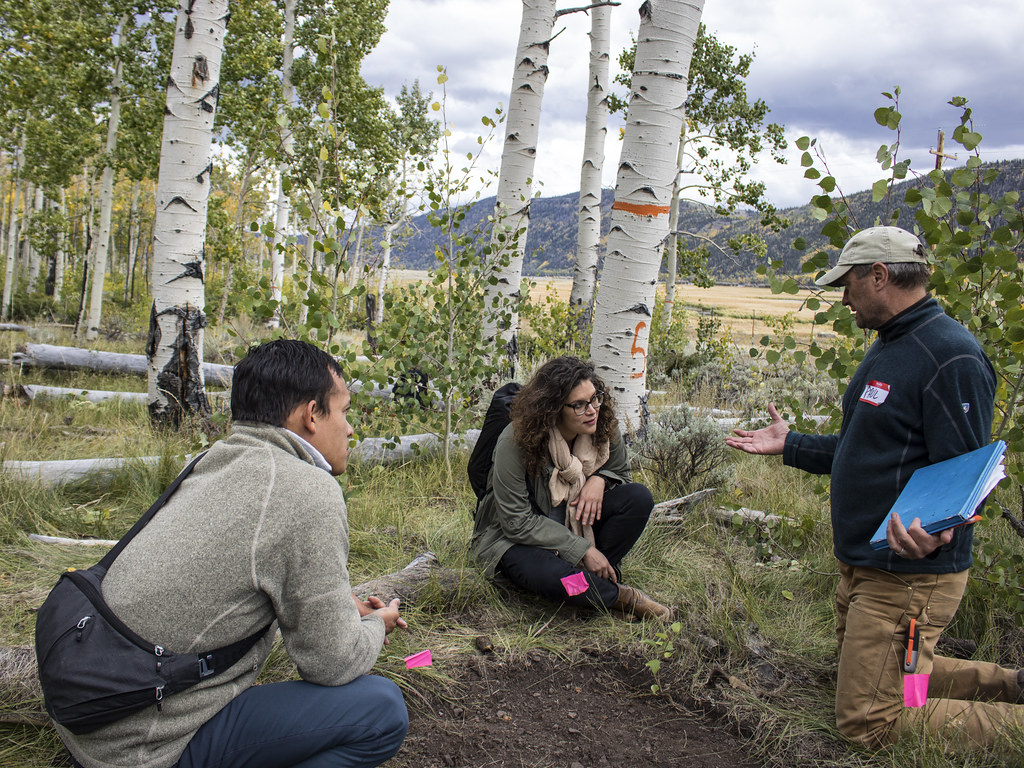 The author examines the shallow root network of Pando with visitors to the famed forest. Photo by by Lance Oditt.

Recent research suggests Pando may be breaking up; a continental drift of sorts characterized by diverging plant communities where one would expect, if ever there were a uniform forest, to find consistency. The cause of this divergence is mishandling on behalf of wildlife, recreation, and ranching interests. On balance, this is a failure of society to gauge Pando’s condition and change tack before system collapse. The core issue is over-browsing by deer and cattle over the past several decades. The evidence is clear. Aspen forests are otherwise very good at self-replacing via vegetative sprouting from the roots. This is how the clone expanded in the first place to its great size. You may think of it this way: Every “tree” is really a branch from a once-united root system. A forest of one tree! The very existence of aspen forests toys with distinction between individuals and communities.

This system has survived for millennia down to the recent past when we started to manipulate domestic and wild ungulates, predators, prey, and human development for recreation. In short, an overabundance of deer and cattle stymies the growth of aspen sprouts. The construction of roads, cabins, and other forms of human decision-making have compounding effects. When this persists for decades, we skew the grove’s demography. There are no longer infant, teenage, or young adult aspen; we are left with a community comprised entirely of the elderly. An unsustainable city of trees. The old are now dying and younger generations are absent. A single infection may decimate the colony overnight. Even as imperfect Earth stewards, we have a duty to reverse this trend. But this will not be easy, whether here in this famed 100-acre wood or anywhere else on Earth.

Pando shares both traits and threats with five other aspen species spanning the northern half of our planet. These aspens collectively form a supercontinent of keystone communities supporting elevated levels of biodiversity. Their ubiquity may cause us to overlook their value. Whether sustained growth of a single aspen clone or infinite forests stretching across vast landmasses, intricate linkages between plants and animals enable outsized diversity.

I recently teamed up with scientists from nine countries to publish the first-ever world compilation of conditions in aspen ecosystems. This network of researchers is working to bring awareness and conservation ecology to a global aspen community. Under the banner of “mega conservation,” we posited a strategy of keystone community conservation that contrasts with conventional single-species preservation.

A species like aspen, fairly common, is supporting myriad species and in many cases is faltering under the weight of short-term interests. In Scandinavia, profuse moose populations eliminate regeneration just as deer have done to Pando. Russia generally treats aspen as an undesirable, where exploitation of fast-growing conifers across the taiga bring more immediate returns. Tar sands in Canada, resort development in the US, or warming climates and extended droughts everywhere — the outcome is similar: Attending plants and animals follow aspen’s declining trajectory. A biodiversity assault writ large, hidden in plain sight. 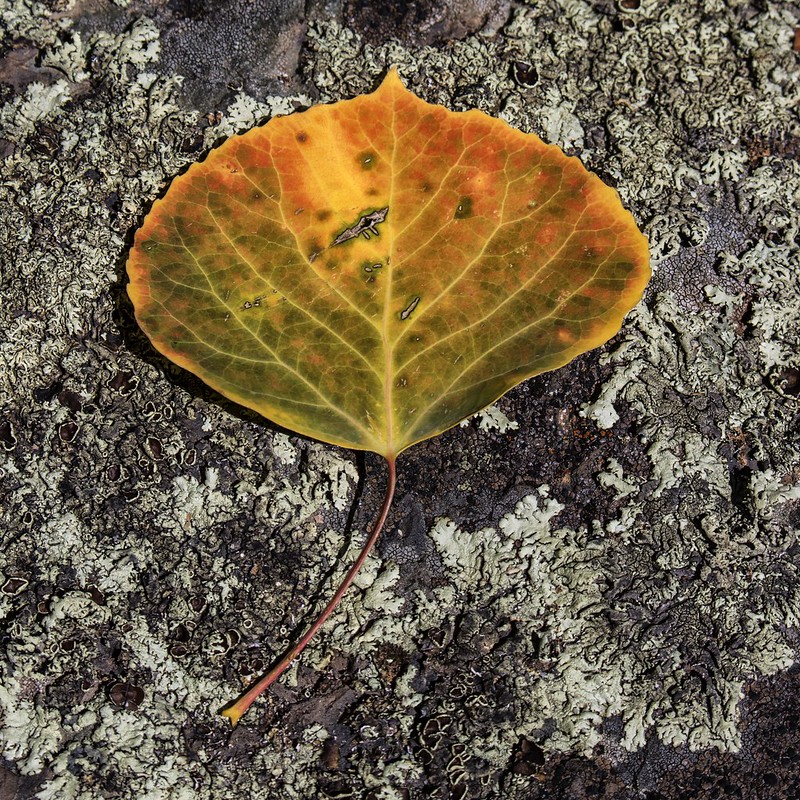 A rainbow of colors in a single aspen leaf is framed by a lichen covered boulder. Photo by Lance Oditt. 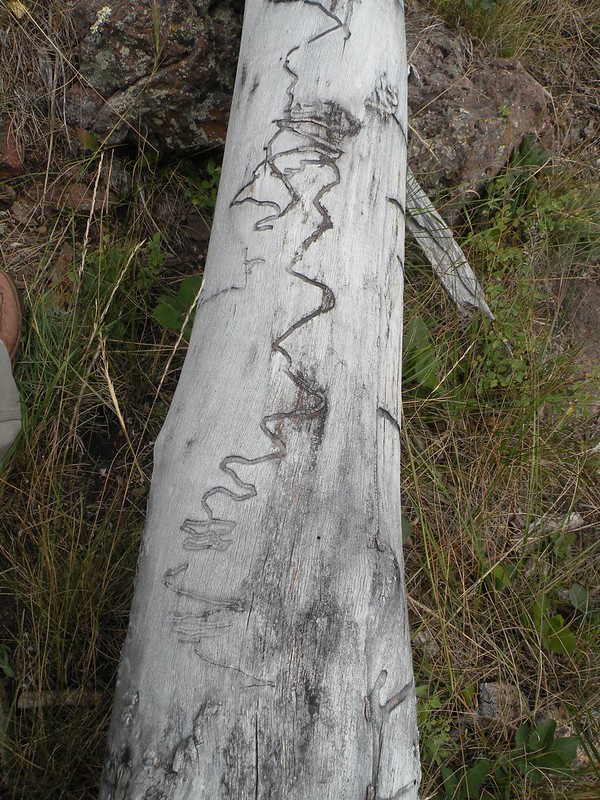 Insects, such as bark beetles, and disease such as root rot and cankers, are attacking the overstory trees, weakening and killing them. Photo by Paul Rogers.

These linkages — climate to biosphere, plants to animals, humans to forests — related at many levels provide a model for sound social networks, too. A community as a single entity. A superorganism. Cascading connections with known and unknown ramifications. A 2018 gathering of spiritual leaders called Pilgrimage to Pando captured the essence of this connectedness, even oneness, across a diverse array of religious practices, including non-believers espousing more humanist philosophies. Expanding roots join those of different beliefs, ages, disciplines, or cultures together, but for many the hidden nature and occasional decoupling of bonds obstructs above-ground links and potential fruition.

Myopia jeopardizes both environmental and social systems. On the other hand, as we embrace unseen associations with each other and Earth — even reaching beyond established nodes — new pathways bring hope in the form of novel understandings, solutions, relations, and attitudes. Roots into roots. Concealed connections yield generative properties: life itself. Pando to Pangea, in metaphor and reality, yields messages of diversity, resilience, sustainability.

As we view aspen through various lenses — aesthetic wonder, biodiversity haven, spiritual retreat, or relational metaphor — each meaning denotes a world of linkages known and unknown. Such a scale of conservation is daunting, not unlike that long-ago perception of a child groping in the darkness of an immense creature. However, there is power in deciphering the connective tissue that comprises organisms, as well as thematic continents. How might we infuse such understandings to create a lasting, ecologically driven, Earth home? Aspen’s symbioses, local to universal, surely provide clues.

Paul C. Rogers is a biogeographer, forest ecologist, and Director of the Western Aspen Alliance at Utah State University. Opinions expressed here are his own and not necessarily representative of USU.