But in the last four years, the Browns have faced unprecedented challenges. Four different wildfires have touched the family’s ranches in Oroville and Indian Valley. Smoke has killed some of their animals. Years of drought have ravaged their lands.

Firefighters battle the the Dixie fire on August 4. California’s largest ever single wildfire, the Dixie fire has already scorched more than 750,000 acres, burning across the mountain range and destroying much of the small hamlet of Greenville. ​Photo by CALFIRE_Official / Flickr.

The disasters have threatened the family’s livelihood, and forced them to question whether life in this region can continue as it has as the climate crisis intensifies.

“If I want our family to continue this lifestyle, it might not look the same as it always has,” said Brown. “Trying to come to terms with that is really hard. I feel like I have to grieve and I don’t know what the future’s going to look like. I don’t know what I should be doing.”

Deadly fires have battered this part of northern California almost annually since 2018, destroying entire communities, killing dozens and covering the area in smoke for weeks at a time.

This year, the region is threatened by the Dixie fire, California’s largest ever single wildfire, and the biggest blaze currently burning in the United States. The fire has already scorched more than 750,000 acres, burning across the mountain range and destroying much of the small hamlet of Greenville.

“I should have been a firefighter instead of a cowboy,” said Brown on a recent afternoon as she glanced down at her phone for updates on the fire, which was raging around one of the ranches.

The fire risk in this part of California goes hand in hand with its abundance of natural beauty: river canyons with emerald green water, rolling foothills of the Sierra Nevada that grow thick in the spring with wildflowers, and vast swaths of trees. In some areas, such as the remote settlement of Concow, Ponderosa pines and Douglas firs cover the landscape – their branches sometimes arch over the roads like a canopy.

This stretch of land, from the Feather River in Oroville up to Lake Almanor, is particularly conducive to flames thanks in part to its steep canyons and seasonal winds. Severe drought has only exacerbated the fire risk.

At the same time, the drought brought a swarm of grasshoppers to the land and forced Brown to reduce her herd. “Our cattle herd is decimated. Our ranches are on fire. I don’t have water.”

“If people were able to practice the way indigenous cultures have done so since the beginning of time, that would be the way to change the way fires move with the landscape,” he said. Prescribed burning creates less smoke than the megafires California is seeing today, Hankins said, and gives people a say in when and how smoke is dealt with.

Sierra Nevada communities, like the town of Greenville that burned earlier this month, were already struggling with population decline, largely due to economic issues, said Jesse Keenan, a climate adaptation expert at Tulane University. The climate crisis will probably accelerate that decline.

There is no indication that these extreme wildfires will diminish in the coming years without dramatic steps to reintroduce fire into the landscape to reduce fuels in the forest and tackle the climate emergency. 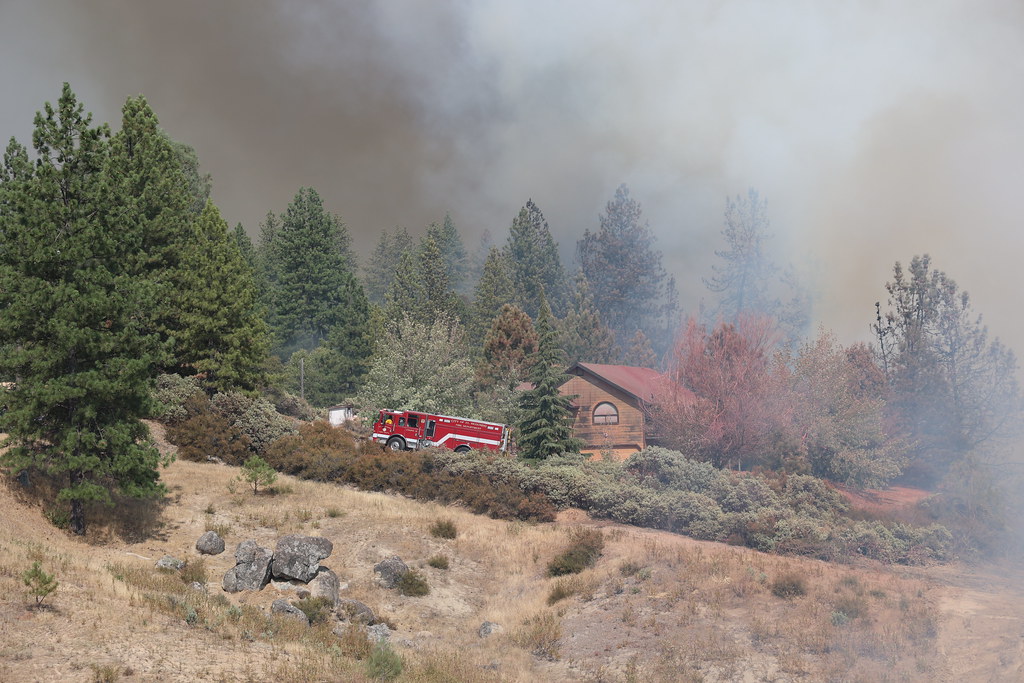 Insurers have become reluctant to cover homes and businesses in the region, raising questions about the ability to rebuild. Photo of a home impacted by the ongoing Caldor by CALFIRE_Official / Flickr. 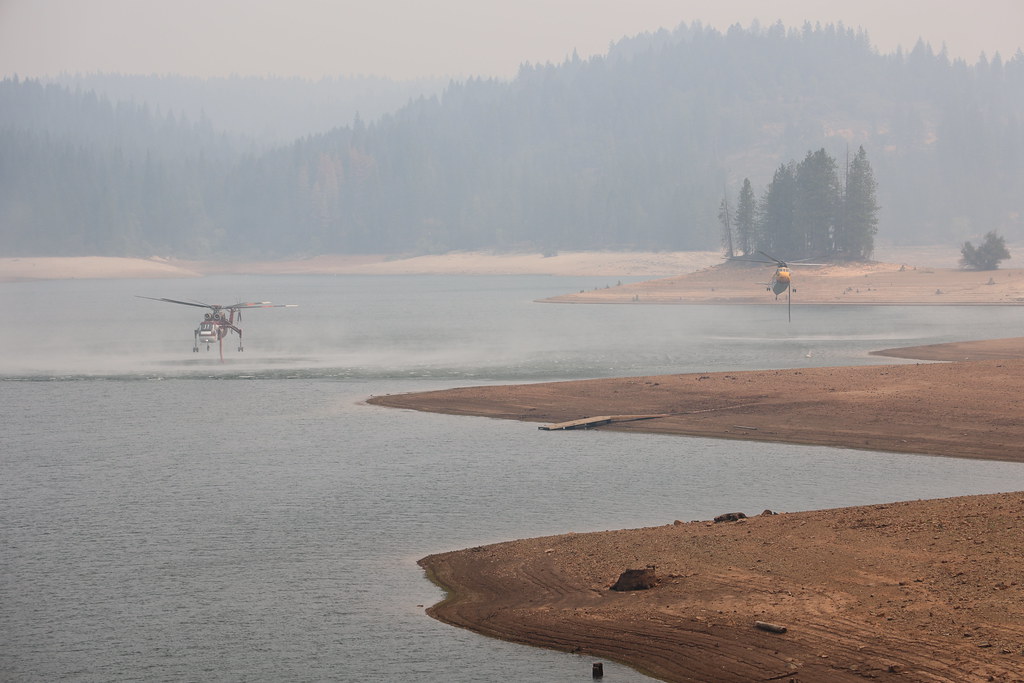 Intensifying wildfires also means the region will continue to see severe smoke lingering for weeks at a time. Air quality in the Lake Tahoe region is currently among the worst in the world because of smoke from the Caldor fire.Photo by CALFIRE_Official / Flickr.

“California is going to fundamentally change,” said Marshall Burke, an associate professor in the department of earth system science at Stanford. “All evidence would suggest a business as usual scenario where we keep warming the climate and we don’t rapidly scale up our efforts to get fuels out of the forest we’re going to see a lot more wildfire and a lot more extreme wildfire. The science is clear on that.”

Insurers have become reluctant to cover homes and businesses in the region, raising questions about the ability to rebuild. Kimberly Price, a Greenville resident, said she lost insurance coverage for her home because she was in a fire zone, and her partner lost coverage on his store, which burned down in the Dixie fire, for the same reason.

“This is a problem in the state of California. If you can’t get your house insured, people aren’t going to move here,” she said.

Intensifying wildfires also means the region will continue to see severe smoke lingering for weeks at a time, including in more densely populated cities such as Chico and Oroville. Air quality in the Lake Tahoe region is currenlty ranked among the worst in the world because of smoke from the Caldor fire.

Smoke at the levels seen this year and last year are likely to be normal going forward, Burke said. “Instead of a few days or a week or two of smoke exposure it’s going to look more like 2020 and 2021 where we have months of bad air,” he said. “The science suggests 2020 is a historical anomaly looking backwards but looking forward it’s not going to be.”

That is particularly bad for vulnerable populations such as elderly people and those suffering from pre-existing health conditions, but the effects extend far beyond. A recent study from Stanford University, of which Burke is an author, found breathing wildfire smoke during pregnancy increases the risk of premature birth. Research also shows an increase in the rate of heart attacks, increased susceptibility to Covid-19 and decreased test scores among children exposed to smoke.

Wildfire smoke has killed several of Brown’s animals in recent years, she said, and there’s nothing she can do to protect them. “They all sound like they’re pack-a-day smokers. And it’s like, are they sick? No, they’ve been out in the smoke for a month.”

Rather than abandoning these areas, people must learn to change the way they live with fire, Hankins said.

“There is no no-fire solution,” he said. “Fire has to be part of this landscape. It has to be, so we should be the ones directing it.”

To Concow residents Pete and Peggy Moak, prescribed burns are an important tool to live in a remote part of California prone to burning. The couple has survived several wildfires, each time staying behind in their home to battle the encroaching flames.

Their expansive property is pristinely manicured and watered – Pete, a former logger, manages the trees – with a large vegetable garden, a fire break and paths free of debris and vegetation so that if a fire does burn they can defend their home. This time of year, the risk is ever present.

“We’ve got a lot of PTSD,” said Pete, whose family has lived in the area since the 19th century. “It’s unexplainable how the tension is, but there’s never a dull moment.”

Fire will surely scorch this area again, the couple says, and living here requires constantly maintaining their land and the lots around them by felling dead trees, clearing needles and dead leaves and using prescribed burns. It also means they’ve all but stopped traveling in the summer and fall, so that they are here to save their home if necessary.

“It’s hard to understand for folks that live in town and sell their house every five years and move somewhere else,” Pete said.

“Pete and folks like us, we have deep roots in the land,” Peggy said.

Brown, too, can’t see herself leaving the land her family has tended for decades or the animals she loves. “That ranch, this land is my passion and I will die defending it. I’ve been here too long. I love it too much,” she said.

But she wonders whether local elected officials will take the necessary steps to prevent these sorts of devastating fires and assist those affected by them.