Update, 11:30 p.m: Jackson County voters approved the measure by an overwhelming 2 to 1 margin. A similar meaure was approved in neighboring Josephine county.

Yellow signs dot the rural landscape of Oregon’s Jackson County, most of them urging local to vote “Yes” to “Protect Family Farms.” Meanwhile, in the population centers of Medford and Ashland, volunteers frantically work the phones trying to get out the vote before 8 p.m. Tuesday. 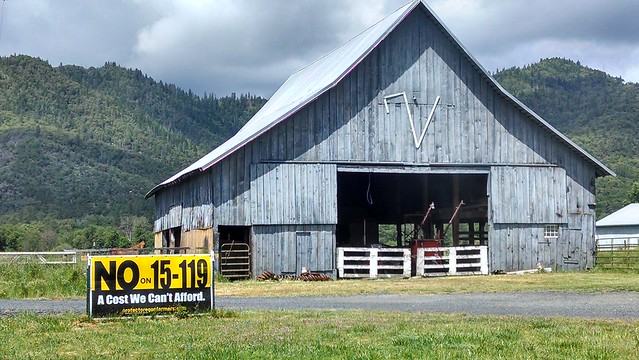 Photo by Andrew StelzerGood Neighbor Farmers, the primary group campaigning against the measure, has raised almost $1 million to date. Over $644,000 of that money came from out-of state biotech companies like Monsanto and Syngenta.

At stake is the sovereignty of hundreds of farmers in the fertile Rogue Valley. And a victory by GMO opponents could signify a new chapter in the debate over genetic engineering in the United States — a country far behind much of the world in regulating GMOs.

Jackson county residents are voting today on whether to ban genetically modified crops, in an area peppered with GMO farms operated by the Swiss Agribusiness giant Syngenta. In contrast to much of the discussion to date in the US, the conversation in Jackson County has been less about the potential health impacts of GMO’s, and more about the right of farmers to determine the origin of the seeds they put in the ground.

The roots of the Measure 15-119, or the Jackson County Genetically Modified Organism Ban, go back to 2012, when local farmers realized that Syngenta had dozens of plots of land scattered throughout the narrow Rogue River Valley — with many growing genetically engineered trial crops. Characterized by strong winds, the valley is home to many organic and seed farms as well as farms that grow beta vulgaris — chard, beets, and other crops which are easily cross-pollinated in those windy conditions.

Oshala farms’ Elise Higley, who grows 66 different crops on her farm, says Syngenta grows GMO beets down the road from her. As a result, she has to purchase beet and chard seeds every year.

“If we saved our own seed like we want to, then we would be growing GMO beets and chard. It would be contaminated with that pollen,” said Higley, who also serves as director of Our Family Farms Coalition, the primary group supporting measure 15-119. “It’s a real economic risk for farmers having those GMO crops so close by.”

Back in 2012, Higley and several other area farmers came together to try and organize a “pinning” map, where farmers would coordinate where they grew which crop, to minimize the risk of cross pollination. Syngenta was invited, but soon backed out of participating. Although the company did not respond to a request for comment, several members of the Southern Oregon Seed Growers Association say the sticking point was that Syngenta wanted a disproportionate number of votes — one for each plot, as opposed to one per farmer.

If measure 15-119 gets a majority at the polls, Syngenta would have one year to dig any GMO crops out of the ground. The company isn’t backing away from the fight.

Good Neighbor Farmers’ TV and radio ads criticize the measure as “big government”, which takes away the right of farmers to choose to use GMOs if that’s their preference. In both Washington and California, similar well-financed advertising campaigns swung the polls on GMO labeling initiatives, which failed in 2013 and 2012 respectively.

Meanwhile, Our Family Farms Coalition has raised less than $400, 000, and is relying largely on volunteer labor.

“I’ve seen people from all walks of life coming in to work here,” says Magdeleno Rose-Avila, standing outside the Ashland campaign office, where he just finished a shift on the phones. A veteran civil rights organizer, Rose-Avila moved to Ashland earlier this year and quickly plugged into the campaign, which he says has reached out to different constituencies. “If we’re going to win, we need everybody. That’s what this community has done. Its taken the farmers, its taken the business people, its taken the students, people of color, and it has talked to everybody …We have Republican farmers, Republican businessmen, we have organic people, we have non-organic people,” he says.

The ban could be the last of its kind in Oregon. Last fall, when volunteers began collecting signatures, the state legislature passed a law preventing local governments from making laws regulating the use of seed. The Jackson County effort was grandfathered in. As was a similar one in neighboring Josephine County.

But that statewide preemptive legislation may have backfired, riling up Oregonians who pride themselves on having local control. Many conservatives have expressed support for the ban based on that principle, not necessarily on knowledge of GMOs.

Campaign volunteer Greg Marcasius says much of the public, including farmers, had to be educated. “In the early tabling I remember people saying, ‘what’s a GMO?’,” he says, adding that there are a variety of constituencies who have banded together to oppose transgenic crops.

Regardless of whether 15-119 passes, GMO’s will likely return to the ballot in November. A signature gathering campaign is already underway for a statewide initiative, which if approved, would require labels on all GMO products sold in Oregon. Currently, Vermont is the only state with a GMO-labeling law, which goes into effect in 2015.

More on this story and related news on corporate control of our democracy and our dinner plates is available at progressive.org, ALECexposed.org, on Making Contact at radioproject.org, and fooddemocracynow.org, in a collaborative reporting effort made possible in part by a grant from The Voqal Fund.