The orca, or killer whale, is a popular icon of wildness in the communities surrounding Puget Sound, a complex system of waterways forming the southern portion of the Salish Sea and extending 100 miles from Washington’s Whidbey Island to the state capital of Olympia. Orcas adorn license plates, t-shirts, and murals throughout the Seattle metropolitan area, where human residents sometimes see small family groups (pods) of these striking marine mammals swim by the shorelines of the city’s public parks. Killer whales also spark the imaginations of regional ferry riders, who keep their eyes peeled for towering dorsal fins or the dramatic black and white flash of an orca breaching in the distance.

Photo byRoss CobbTokitae/Lolita, who was captured as juvenile from Puget Sound’s Penn Cove in 1970, has been living in a small concrete pool for almost half a century. The Lummi Nation wants to bring her back home to the Sailesh Sea.

Meanwhile, 3,000 thousand miles and a world away, an orca named Lolita performs showy tricks twice a day at Miami’s Seaquarium, where exuberant crowds have cheered her on for almost half a century. Lolita, known before her sale to the Seaquarium as Tokitae (a Coast Salish greeting meaning “nice day” or “pretty colors”), was taken as a juvenile from Puget Sound’s Penn Cove in 1970 and has lived in Miami ever since. Her small concrete pool — at only 80 feet long and 35 feet widedamage to his head in 1980.

This spring, Washington’s Lummi Nation is saying enough is enough for Tokitae, and that it’s long past time to bring her home. In early May, several tribal members — with support from orca organizations, Sierra Club, and other activists — embarked on a 27-day, cross-country Tokitae Totem Pole Journeyto return Tokitae to Puget Sound. As part of the journey, Lummi leaders are transporting a totem pole carved in honor of the captive orca.

Jay Julius, chairman of the Lummi Nation, released the following statement before the journey’s launch in Bellingham, Washington, on May 9: “Tokitae’s story is more than a story of a whale. Her story is the story of the Native peoples of this country who have been subjected to bad policies. Because of the failure of policymakers to protect our wildlife, she was stolen from her family 47 years ago and taken to the Miami Seaquarium. Because she is a relative of the Lummi people, it is our sacred obligation to bring her safely home to the Salish Sea.”

Between 1964 and 1976, roughly 50 orcas were captured in or near Puget Sound and shipped all over the world to serve in the entertainment industry — with Tokitae being the last remaining survivor. This brutal era of orca abduction, described in great detail in Sandra Pollard’s Puget Sound Whales for Sale, depleted the Salish Sea’s southern resident orca population by nearly one-third. The anguish of orcas living in captivity was brought to the big screen by the 2013 documentary, Blackfish, which is widely credited with causing Seaworld to phase out orca performances and breeding at its own marine parks.*

But for Lolita, Miami’s Seaquarium says, the show must go on. The Lummis disagree. 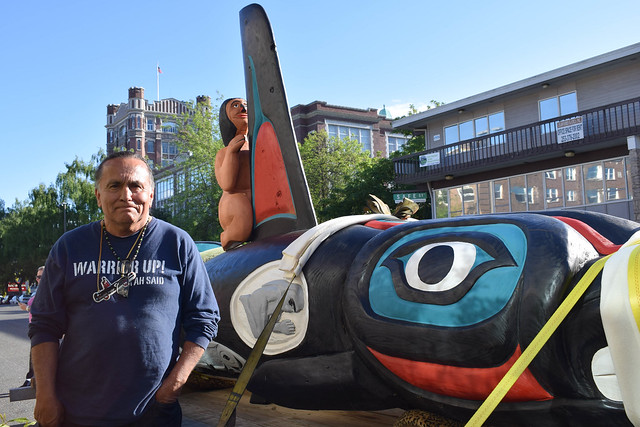 Photo by Katy Schaffer A master carver with the Lummi Nation’s House of Tears, Jewell James created Tokitae’s totem pole with his brother, Douglas, to serve as an emblematic focal point for the campaign. The brothers are currently transporting the 16-foot cedar pole to Miami, where they and others will try to persuade the Seaquarium to do what they believe to be the right thing for Tokitae.

“They could be the villain or they could be the hero,” Jewell James told Earth Island Journal at the Tacoma, Washington stop of the tour. A master carver with the Lummi Nation’s House of Tears, James created Tokitae’s totem pole with his brother, Douglas, to serve as an emblematicfocal point for the campaign. The brothers will cart the16-foot cedar pole all the way to Miami, where they and others will try to persuade the Seaquarium to do what they believe to be the right thing for Tokitae. “She’s served them for 48 years, unwillingly, as a captive. She’s a being in mind, body, and soul, and she deserves to be released,” James said.

The Lummi Nation is working with veterinarians and others to flesh out the plan for Tokitae’s return. As currently envisioned, the plan would involve transporting Tokitae by charter plane, truck, and barge from Miami to Puget Sound, where a seaside pen would await her arrival. Here, a team of professional caretakers would attend to her needs and wellbeing, gradually reintroducing her to her native fish diet. The campaigners hope Tokitae would ultimately reconnect with her family and be able to live out the rest of her life as a free orca.

In 2017, the Miami Beach Commission unanimously voted in favor of a symbolic resolution to free Tokitae, reflecting broad-based political support for her release. But some scientific experts say Tokitae is better off where she is at this point, citing the health risks of moving her to a new environment after she has spent most of her life at the Seaquarium.

The president and general manager of Seaquarium, Andrew Hertz, has also expressed strong opposition to sending Tokitae home. In a letter quoted in the Miami Herald, he wrote,” it would be reckless and cruel to treat her life as an experiment and jeopardize her health and safety in order to appease a fringe group.”

James is confident that Tokitae would do well in her native waters, and doesn’t believe the Seaquarium has her best interest at heart. “I suppose in their minds they think they love her, but they love the bottom line more than anything,” he said, adding that reuniting Tokitae with her family is of foremost importance. “Every child who’s been taken from their mom craves to go back. They always dream of being with their mother again, and Tokitae is no different. She could still live a long life.” Granny, the matriarch of Tokitae’s clan, was thought by some to be over 100 years old when she died last year.

For James and other members of the Lummi Nation, Tokitae’s tragic plight taps a deep nerve in their own historical struggle to survive as Native Americans.

“People ask, well where were the Lummi back then?” James said, referring to the time of Tokitae’s capture. “Well, you had all the churches and the United States government, as well as the cooperation of the state of Washington, trying to disband us, break us apart, relocate us into the various cities. Hoping we’d melt into the population, solve the Indian problem…We had no say.” And nor, he said, did Tokitae.

Julius, the Lummi chairman, also sees Tokitae’s story as a warning call for citizens and policymakers in today’s Puget Sound region. “Strong policy and respect for the nation-to-nation relationship between tribes and government is essential if we are to create a healthy future for the Salish Sea and prevent this from happening again. We don’t have to look further than our relative, Tokitae, to see what happens when policymakers fail to protect our lands, waters and marine life.”

Three ecotypes of orcas inhabit waters off the West Coast of North America: residents (fish eaters), transients or Bigg’s killer whales (marine mammal hunters) and offshore killer whales (consumers of fish, squid, and possibly sharks). The southern resident orcas of the Salish Sea are considered to be at risk of extinctiondue to dwindling chinook salmon, vessel noise disturbance, and extensive contaminants, including toxic heavy metals in Puget Sound. Scientists currently estimate the size of this endangered population to be only 76 animals.

Tokitae’s Totem Pole Journey is scheduled to conclude on May 27 in Miami. The itinerary is online at sacredsea.org, and the journey is being filmed as a documentary.

*Earth Island’s International Marine Mammal Project (IMMP) and the Animal Legal Defense Fund proposed the ban on breeding of orcas in California before the California Coastal Commission; the adoption of that restriction led directly to SeaWorld’s decision to end breeding of orcas in all their facilities. IMMP, which has long been campaigning against the keeping of orcas and dolphins in captivity, helped develop one of the many lawsuits against SeaWorld, arguing that the theme park has misled the public about the health and wellbeing of captive orcas.