In the region of Laconia, located at the southernmost tip of mainland Greece, ancient olive trees grow from sections of ancient buildings, seeming to fuse into a single tableau. Other trees grow in inhospitable, rugged and arid regions. These trees can reach up to seven meters high, and have trunks of intricate designs plus oblong silver-green leaves, which hide small, round fruits, and emit a distinctive scent with fruity and woody notes. 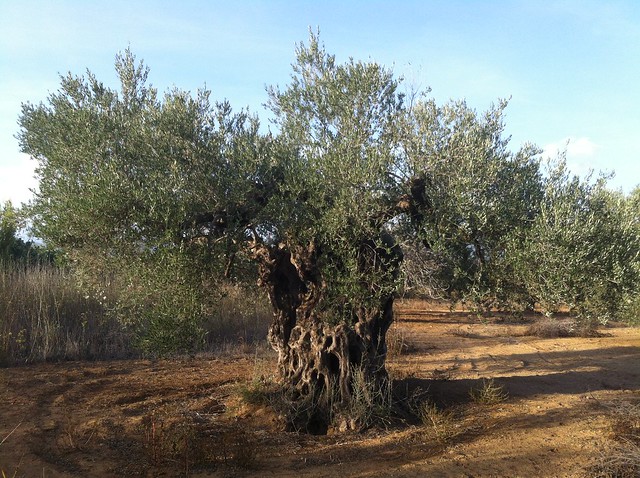 photo by Adoni DimakosGreece has a long track record of preserving its antiquities made of marble. But its ancient olive trees, some of which are more than 2000 years old, have received far fewer protections.

And yet, the trees face an uncertain future. Locals clear them to make room for new crops or use the wood for burning. The problem is compounded by agricultural mismanagement — the government gives subsidies to farmers to rip out ancient olive trees and plant orange trees in their place.

Such ancient Greek olive trees, but also Italian, Spanish, and Moroccan trees are disappearing from the landscape for multifold reasons. Climate change in the Mediterranean has triggered a shift in precipitation patterns as well as extended droughts, floods, and immense heat waves that occur with greater frequency and increased intensity, and, which, in turn, adversely affect the production of crops and the whole olive orchard agroecosystem. Bactrocera Oleae scourges, on the other hand, make table olives unmarketable and negatively impact the acidity and quality of the produced olive oil. Modern agricultural practices such as re-landscaping for tractors to get nearer to the crop add to the problem. Enter using the olive tree wood for heating in a country that has been eight years in recession and has lost around one gross domestic product from the value of each of its citizens’ private wealth, and you understand the threats currently posed to Greece’s olives.

Greece has a long track record of preserving its antiquities made of marble. But its ancient olive trees, some of which are more than 2000 years old, have received far fewer protections, says Adoni Dimakos, a Greek-Canadian entrepreneur. He is currently spearheading an ambitious project, known as OliveTree123.com, to catalog and preserve these rare and endangered ancient olive breeds in his native province of Laconia.

Dimakos is an unlikely defender of Greece’s olives. Born in Montreal, Canada, in 1968, he lived in Greece during his formative teen years and started falling in love with the olive trees around his home. In 1988, he returned to Canada, where he got an advanced degree in Public Policy and Administration, and later became a human resources manager for the Department of Human Resources and Skills Development of Canada. For 15 years he worked in the field of data privacy, but roughly two years ago an idea cropped up in his mind. “What if I ride my motorcycle seeking endangered olive trees to photograph and help people who do not see the tragedy of such century-old trees vanishing for no good reason empathize with my cause?”

photo by Adoni DimakosOlivetree123.com serves as a repository of images, thus ensuring the pictorial immortalization of varying specimens that may soon disappear from Laconia.

A year after his epiphany, Dimakos took an early retirement. At the age of 47, he his wife and their newborn returned to Laconia and settled on the land he had inherited — a huge olive grove comprising also fig, almond and pear trees — from his ancestors. Now that he’s established roots in this olive rich region, his ambitious plan is to educate the Greek public about these living national treasures — and to protect them for future generations.

Olivetree123.com serves as a repository of images, thus ensuring the pictorial immortalization of varying specimens that may soon disappear from Laconia. In essence, the website is an online inventory of the oldest and finest looking olive trees. There is currently no activism surrounding the protection of the ancient olive tree in Greece, so the website does not fit into any larger picture other than existing for the sake of taking stock of these glorious trees so that future generations can benefit from viewing trees that may not exist due to human intervention.

“Left to their own accord, ancient trees require minimal water and are tough enough to survive natural dangers, but they are defenseless against chainsaws and bulldozers. Visitors to the site become informed and by word of mouth it is hoped that government officials will step in and set up regulations prohibiting the destruction of such a national emblem,” Dimakos says.

There are two main varietals of olive in Greece under threat: the Asproelia (meaning “white olive” in Greek) and Koroneiki. The Koroneiki, is known for its hardiness and adaptability to the harshest of conditions. Strip it down completely one season, and it will bloom again the next. Branches have even been known to burst forth from one-foot high stumps. The Asproelia (also known as a “Golden Green Dopia”), on the other hand, is less resilient and does not breed well, which means that hard-up, local farmers will often replace Asproelia trees with more robust saplings, usually of the Koroneiki variety and the Spanish newcomer Arbequina. When its branches are cut they take years to grow back—if ever. Despite its shortcomings, Asproelia is much more prized than Koroneiki since it produces greater volumes of richer oil and is less susceptible to freezing and disease.

There are strong economic incentives for farmers to protect Greece’s native olive species, says Dimakos. He tells me of one farmer who recently inherited a piece of land that had a few old olive trees on it as well as other fruit and nut trees including figs, pears trees and almonds. Dimakos says the farmer’s plot was quite large so he hired a local bulldozer operator to rip out all of the non-olives and plant 200 olive saplings. Right now the price of olive oil is at a record high of $4.8 per kilogram, Dimakos adds, which means that in five years the farmer is expected to be producing $3,240 worth of olive oil. In addition to oil, olive wood is in high demand, prized because it is infused with olive oil, which makes it burn longer. “A tractor-trailer load of olive tree wood sells for €150 ($163), while a nine-ton truck full of olive tree wood sells for €900 ($979),” says Dimakos.

Yet, Greek’s economic crisis has proven to be one of the greatest threats to the trees. One result of the government’s austerity measures has been a sharp rise in energy costs. Greece’s wealthier urban areas have been able to generally withstand the increases but in poorer rural regions the higher energy prices have been a burden. To compensate, rural residents have taken to burning more wood—even if that wood comes from severely endangered olives. “I can’t hold grudges against them,” says Dimakos. “They just do what’s best to feed themselves and their families.” Asked about its view on the subject, the Greek Ministry of Rural Development and Food replied it could not comment on the matter.

People from across Europe have joined the cause, says Dimakos, pointing to one Danish resident who recently suggested camping around ancient Asporelia trees (as protestors in the US have done to protect giant redwoods). But Dimakos is just one man. He says that he hopes to enlist the help of government environmental officials and local law enforcement agents, who he says can do a lot to protect the trees from illegal logging.

One solution he has proposed is to reward farmers who voluntarily protect rare trees by giving them small loans. Or to take advantage of the generous Laconian topsoil, and intensify the cultivation of the younger and faster-growing varieties of olives and, thus, turn impoverished farmers’ attention away from the rare specimens.

For his part, Dimakos will continue scouring the fields of Laconia to protect these rare and beautiful trees. “I won’t stop,” Dimakos said. “It’s become a matter of empowerment. It symbolically links me to my roots. I feel proud.”