On the Frontlines of Thailand’s “Blood Wood” War

Deep in Thailand’s Thap Lan National Park it’s oppressively hot, sticky and claustrophobic. Above us, huge trees, fighting to break free from the stranglehold of snaking vines, reach skyward, their spreading canopies stealing our daylight. We’re penned in by a twisted tangle of dense, damp undergrowth, our ears assailed by a maddening buzz of cicadas, red mud sucking at our boots, ravenous mosquitoes feasting on our exposed flesh. It’s forbidding and alien. 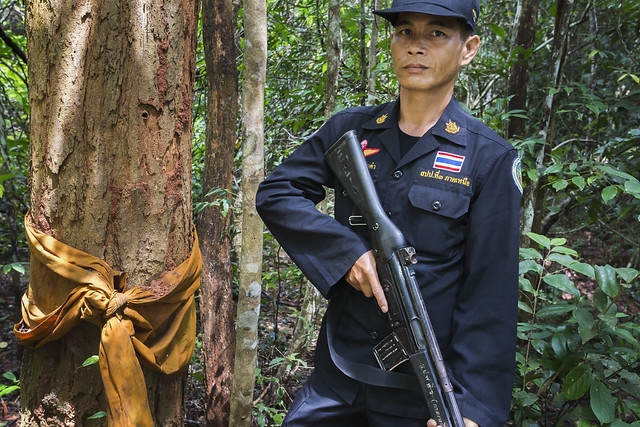 Photo by Ann and Steve ToonA Siam rosewood tree blessed by a Buddhist monk in Thailand’s Thap Lan National Park. The forest has become a war zone, laid siege by gangs of armed criminals in search of rosewood, which fetches hundreds of thousands of dollars on the international black market.

It’s also insanely beautiful and a biodiversity hotspot of international importance. Thap Lan is one of five contiguous national parks which form the Dong Phayayen-Khao Yai Forest Complex, a UNESCO World Heritage Site of more than 2,300 square miles of rugged tropical forest in the east of Thailand, close to the Cambodian border. It’s home to many threatened and endangered species, including Asian elephant, Siamese crocodile, and banteng. And tiger. Seldom seen, but we have the proof of their presence right in front of our eyes. Eric Ash, of the Thai-based anti wildlife trafficking organization Freeland Foundation, has invited us along to check camera traps he’s placed along the forest trails. We’re poring over his laptop, amazed at the sheer wealth of wildlife that shows up: leopard cat, elephant, Asiatic black bear, pig-tailed macaque, large-spotted civet, dhole, hog badger. Then what we’re most looking for: a huge, muscular male tiger fills the screen. Eric checks the stripe pattern. “This is male number two,” he says.

Freeland’s cameras have revealed a significant population of Indochinese tigers living deep in the forest, where until recently conservationists believed they had gone extinct. But these same cameras have shed light on an altogether more sinister and deadly forest secret, the reason we’re accompanied everywhere here by an armed guard. The forest has become a war zone, laid siege by gangs of armed criminals in search of a natural commodity that fetches hundreds of thousands of dollars on the international black market. It’s not the tiger they’re hunting, but a tree. 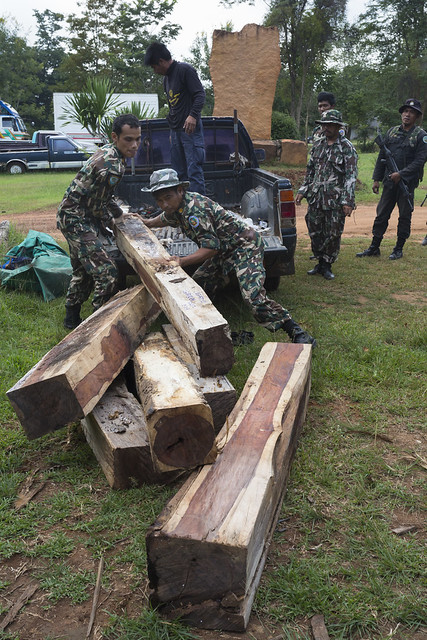 That tree is the Siam rosewood, Dalbergia cochinchinensis, a rare forest hardwood with a distinctive red-hued heart. For centuries rosewood has been valued in China for the manufacture of religious statues and intricately carved ‘Hongmu’ furniture, a style dating back to the Ming and Qing dynasties. In recent years reproduction Hongmu furniture has become a status symbol for China’s rapidly growing affluent middle class. Demand has soared since the 2008 Beijing Olympics, with a single chair selling for $1 million. The Chinese government has actively encouraged the industry with grants and tax breaks.

Siam rosewood is one of the most valuable of 33 accredited Hongmu hardwood species. As the price has soared to as much as $100,000 per cubic meter, the forests of Laos, Cambodia, and Vietnam have been virtually stripped of the tree. Now organized criminal syndicates are turning their attention to Thailand’s forests.

Freeland’s camera traps recorded a 950 percent increase in poacher numbers in one three month period alone, Ash tells us. Groups of up to 100 men are entering the forest to take the rosewood, mainly Cambodians who cross the nearby border illegally, paying off corrupt border officials. They are armed with chainsaws, AK47s, and motorcycle wheels, with which they craft makeshift handcarts they use to transport the wood out of the thick forest. The felled timber, cut into rough planks, is then loaded onto vehicles, to be smuggled back across the border and, ultimately, to China.

“As well as taking the wood, they poach wildlife for food, and clear large areas for their camps,” Ash explains. “If we can’t protect the Siam rosewood, it’s going to have significant implications for some of the other endangered species in the forest. Rangers are out-numbered and under-resourced.”

Siam rosewood is classified as vulnerable on the IUCN red list, and in 2013 was listed in Appendix II of CITES, which requires permits to be issued for trade. But this, and legislation to protect the species in the range states of Thailand, Laos, Cambodia and Vietnam, has been largely undermined by large scale smuggling and rampant corruption.

At a ranger station in Thap Lan National Park we’re shown a huge enclosure full of hundreds of confiscated rosewood logs and rough planks. There are mountains of motorcycle wheels, a shed full of chainsaws and outboard motors (some poachers smuggle timber across a lake adjoining the park), and a graveyard of at least two dozen confiscated vehicles, including trucks with false floors, and a mobile grocery van with large cool boxes adapted to hide the illegal timber. This is only one of several evidence stores we’re shown over the next few days in the national parks we visit, and represents just a fraction of what’s being illegally felled.

As we photograph the confiscated timber, a truck arrives at the ranger station, loaded with rosewood, rangers, and three poachers that have just been caught. They’re bundled out and made to sit on the ground, humiliated, as we take photographs. Two are only teenagers, and it’s hard not to feel sorry for them. They’re taking the big risks, but are clearly not the ones making the big money. Rosewood poaching is closely tied up with the illegal drugs trade here and many of the poachers become addicted to a methamphetamine/caffeine cocktail called ‘yaba’. Some are even paid in the drug. 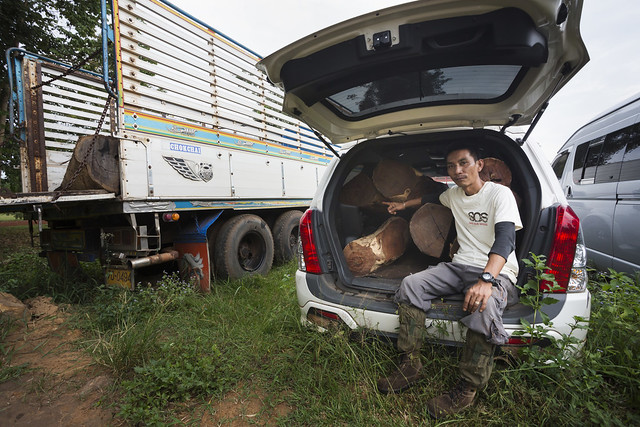 There’s little sympathy among the rangers, however. In the past two years several have been wounded in confrontations with poachers, and one killed. Rangers also face hostility from some members of their own communities, for whom guiding poachers into the forest has become a lucrative business.

At park headquarters we meet ranger team leader Chaloaw ‘Doi’ Kotud, who has worked in the park for 20 years. He’s a tough, soft-spoken man, not someone to pick a fight with. “The most important thing the rangers doing this job need to have is heart and passion and they need to be fully prepared to sacrifice themselves for the job,” he tells us.

Anti-poaching patrols are heavily outnumbered by the poaching gangs, and often out-gunned. Rangers tell us of going into the field with only a handful of ammunition, and without adequate food. Equipment, field supplies and training supplied by Freeland, with financial support from the IUCN’s SOS Save our Species initiative, has helped, but it’s clear that fighting the poachers remains a hugely dangerous and largely thankless task.

Yet most are optimistic they will ultimately win this bloody war with the poachers. Whether that will be in time to save the Siam rosewood is another matter. Already the largest rosewood trees have all but vanished, and poachers are resorting to digging up the roots. It will be 50 years or more before the saplings that survive will mature.

But there are some hopeful signs. Thailand’s military government has promised to clamp down on corruption. There have been tougher sentences for poachers and some seizure of assets from the criminals higher up the chain. Now, however, the poachers are turning to other rare hardwood species to meet the insatiable demand from China.

Before leaving Thap Lan, we speak to the park superintendent Taywin Meesap. “Many Chinese believe Siam rosewood is a holy tree,” he says. “That’s why they want to have furniture made from it in their house, because they believe it will bring them luck. I want to tell them this rosewood is not holy, it will not bring luck to their life, because this rosewood is obtained through the lives of rangers and criminals. It is wood that is stained through with blood.”

Shortly after we return home, Ash emails us with an update. Rangers have discovered remains of a camp large enough for 150 poachers. Another team has had a hand grenade thrown at them. And Thap Lan chief Taywin Meesap is being moved to another park, allegedly because two hitmen had been hired to kill him. More encouragingly, an army unit with heavy duty equipment and weapons is now based at the ranger station we visited. The blood wood war goes on.