The Old Man of Algonquin Park

As Ontario's famous fox recovers from car injury, he serves of a reminder of the perils of feeding wild animals
Andrew Budziak

In early November 2017 a fox known as the Old Man leaves the cover of the coniferous pines of Ontario’s Algonquin Provincial Park’s dense forest, and totters towards a gravel back road. The Old Man stops, and cranes his ears, listening. His tail — matted and worn with age — drags along the ground behind him as he heads towards to the road. His hips move uncomfortably, stiff with arthritis, but he’s hungry so he carries on. Somewhere nearby his mate is making the same journey along with their kit, following the unmistakeable sound of a slowing car. 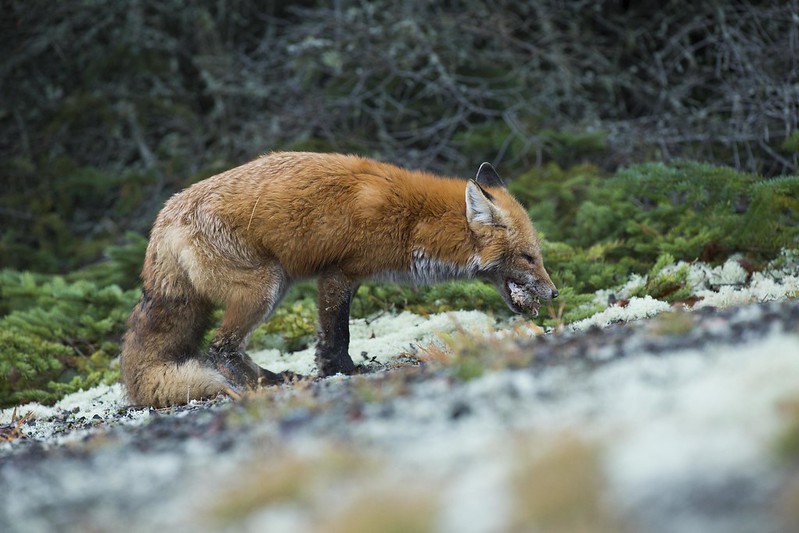 Photo by Andrew Budziak In October 2017, a month before he was hit by a car, the Old Man enjoyed a meal left for him by park visitors. Feeding wild animals is strictly against the rules of Algonquin Provincial Park.

The Old Man knows the road well, but can’t predict where the car might stop. When he gets to the road, he mistimes, and pops out in the path of the moving vehicle. He realizes his mistake too late. In his younger days, he may have been able to get away unharmed. But not now. The Old Man’s legs no longer have that spring that allows for a quick getaway. The car clips his front left leg. The Old Man hobbles away into the cover of the pines.

As the Old Man hides among the forest cover, his injures weaken his body and his immune system begins to struggle. Mange begins to wreak havoc on his fur. To fight the itch, the Old Man gnaws at his tail. Within a few days, most of his tail is furless. His injured leg coupled with his bad hips makes walking painful and slow.

The Old Man’s partner and kit are also hit by cars either on the same day as the Old Man, or shortly after.

It’s difficult to know for sure what happened to the Old Man and family, but this scenario is probably pretty close to the truth. So why would a family of wild foxes be so eager to rush towards the sound of a car? Over the years, slowing cars and slamming doors have signified an easy meal for the Old Man. Park visitors have learned that by crouching down and holding out food, the friendly fox who would become known as the Old Man would happily be fed by hand. 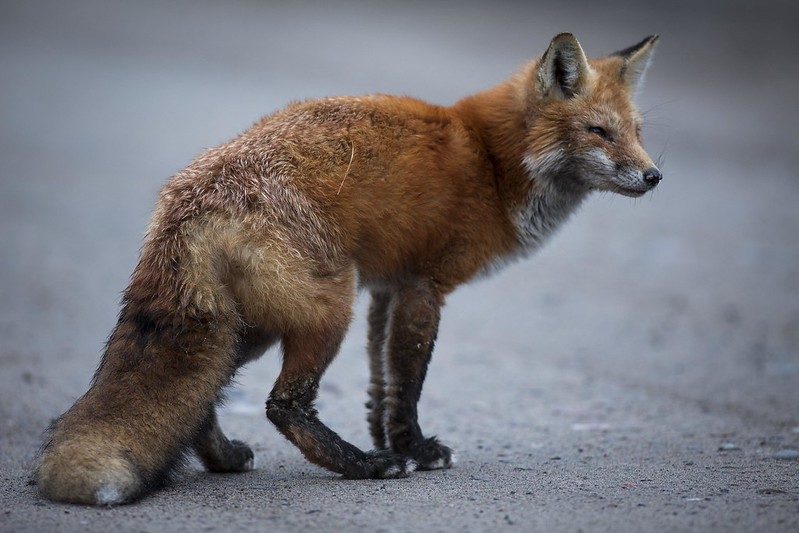 Photo by Andrew Budziak The Old Man sits on the road waiting for park visitors to arrive and provide an easy meal in October of 2017.

The Old Man is no average fox. Perhaps because of this easily accessible food source, he is estimated to be about 12 years old, which is ancient for a wild fox. Wild fox usually live between three and six years.

Despite this longevity, hand feeding has had a devastating impact on the Old Man’s family. Not only has the Old Man been injured on several occasions by passing vehicles, but several of his kits have been killed by cars while following their parents’ lead.

Algonquin Park is clear about the rules when it comes to feeding animals: It’s not allowed. Signs are posted around the park and the rules are also enforced by rangers. Despite the warnings, visitors flock to the road where they know the family of foxes will eat from their hands, looking for an Instagram worthy moment. But what happens outside the frame of those pictures is much less photogenic.

After being hit by the car, the Old Man struggled in the woods. A hobbling fox is an easy meal for a hungry wolf. November 2017 was particularly cold, and harsh winter weather was only a few weeks away. Because of his injuries and reliance on hand feeding, the Old Man’s prospects were not looking good. Luckily, a passerby saw the visibly injured fox and called the Aspen Valley Wildlife Sanctuary, located a short distance from Algonquin.

After receiving permission from the park and Ontario’s Ministry of Natural Resources, Howard Smith, the Managing Director of the Aspen Valley Wildlife Sanctuary, began setting traps for the Old Man, his mate, and his kit. 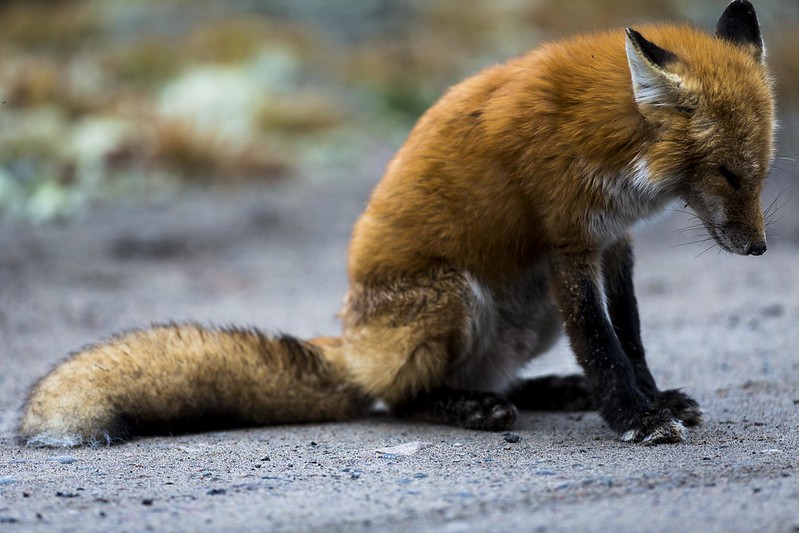 Photo by Andrew Budziak Even before being hit by a car in November, the Old Man had been hit at least two times before. His hips are also bad from arthritis.

While Smith was setting the traps and searching for the injured family, he urged people not to feed the foxes. “People thought they were helping the injured foxes,” Smith explained, “but what was happening was the foxes were eating food from people’s hands so they weren’t interested in what was in our traps.”

Within the first week, the kit was caught. The Old Man put up more of a fight: it took 25 days to finally catch him. The Old Man’s partner has yet to be trapped.

When Smith was finally able to see the Old Man up close, the fox was in bad shape. His front leg was broken, the fur on his tail was missing and he had several other old injuries from being hit by cars, perhaps two or three times, in the past. He had bad gum disease which was a result of being fed pizza, candy, and other food that foxes don’t come across in the wild.

His kit, dubbed Pixie, had several injuries including a fractured pelvis and a fractured hip.

Pixie and the Old Man are now recovering at the Aspen Valley Wildlife Sanctuary. Pixie is healing nicely. Because of the number of injuries and his age, the Old Man’s recovery will take longer, although the fur on his tail is beginning to grow back.

The Old Man’s future is uncertain. If he can heal well enough, he will be released back into the wild in the Spring. If he can’t, he will live out his remaining days in the sanctuary.

This narrative is a black and white example of the dangers of improper human-wildlife interactions. “The main thing coming out of this is what happens when you feed animals,” says Smith. People think they are being kind by feeding the animals but by doing so “people are literally loving the animals to death.”