Disruption of soil may leach salt into waterways
Kate Dougherty

A salty mystery is brewing in Carbon County, Wyoming. The brush-carpeted landscape here is home to ranchers, farmers, and the beleaguered sage grouse. It’s also home to Muddy Creek, where water salinity spiked suddenly in 2009. 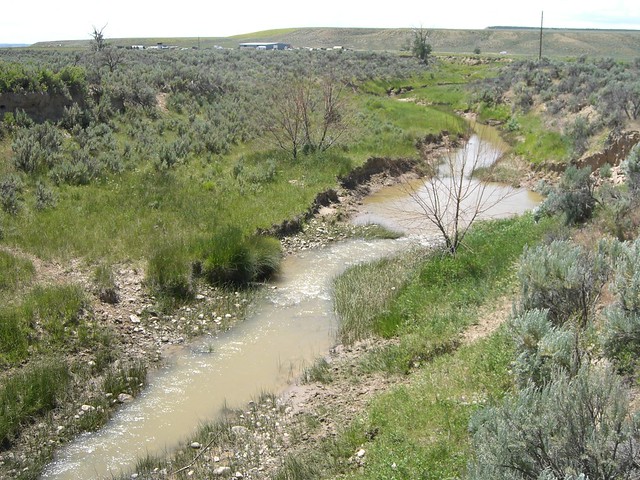 Salinization is a global problem that can have many causes, and the oil and gas boom is making matters worse. Wastewater from fracking and failed wells can infiltrate creeks and streams, eventually making them too saline for use on crops or consumption by cattle, wildlife, and people. The brine can corrode industrial equipment, and most water treatment facilities are unable to remove it. But Muddy Creek doesn’t fit the typical scenarios, US Geological Survey soil scientist Carleton Bern says. The problem here may lie in the sheer amount of construction needed to support the oil and gas industry.

Fossil fuel companies peppered the Muddy Creek area with a total of 1,200 new wells between 2006 and 2010. Building all of those wells, pads, pipelines, and roads required tilling up mounds of salt-rich soil, which is common in semi-arid areas, including the area surrounding Muddy Creek.

In wetter climates, precipitation gradually leaches salt from the ground and out of the soils. In drier regions, however, significant salt concentrations often remain at shallow depths just below the surface. Well construction disturbs the soil, bringing the salts closer to the surface, where runoff then delivers them to streams, creeks, and rivers. Puddles can also sift downwards, carrying dissolved salts to waters at lower elevations. Streamside construction is another pathway that brings the soil into direct contact with surface water.

“A substantial fraction of the new development is [coalbed methane extraction] of the ongoing Atlantic Rim play,” Bern writes in a 2015 paper on soil disturbance, referring to oil and gas extraction efforts in Carbon County. In the BLM’s 2007 Final Environmental Impact Statement for the Atlantic Rim Natural Gas Field Development Project, the agency wrote that 2,000 “wells for producing CBM and conventional natural gas were projected to be drilled over a 20-year time span.” The BLM expected a total of more than 39 square miles of surface disturbance from road and well pad construction, Bern adds. To date, just over a quarter of those wells have been drilled.

This trend may well be the cause of Muddy Creek’s recent woes; the creek hugs the Atlantic Rim, and cuts across its northern half. The Wyoming Landscapes Conservation Initiative — an inter-agency working group of biologists, range managers, conservation districts, landowners, and county commissioners established in Western Wyoming’s Green River Basin in 2007 to assess and protect the land in the face of the region’s explosive energy development — discovered the surge in salinity in Muddy Creek in 2011. Bern, who works with WLCI, has been monitoring the situation at the front lines ever since.

A new pollution pathway for oil and gas development?

Coalbed methane extraction is one of the usual suspects when high salinity readings are detected — produced water from fracking can be highly saline. While fracking was common in Wyoming at the start of this century, the plummeting prices of the natural gas boom have left many the state’s coalbed methane wells abandoned.

But Bern says that surface water discharges from formerly operating wells would have been too brief and limited in scope to account for the problem at Muddy Creek. Chemical analysis of the water also rules out faulty wells, naturally saline groundwater, and field irrigation.

Livestock — long the bane of rangeland waters — could also have impacted creeks and streams by disturbing the salty soils. But in his paper, Bern explains that Wyoming land agencies restored streams degraded by grazing in the late 1980s and 1990s, many ranchers have implemented best practices when it comes to grazing, and water quality improved in the state as a result.

Nor are the changes to Muddy Creek climate-driven. While dry spells and warmer temperatures could have concentrated the salts, none of the 28 streams in nearby watersheds that Bern tested have been similarly impacted. “Muddy Creek is an anomaly, having the only strongly significant trend of increasing salinity for 2005–2012,” he explains.

The Muddy Creek salt’s chemistry best matches the Lewis Shale, a geologic formation encompassing the Atlantic Rim. Marine shales like the Lewis were originally laid down by ancient oceans, and generate large amounts of salt as they weather into soil.

Bern’s theory, then — that soil disruption caused by oil and gas development led to increased water salinity in Muddy Creek — is the most plausible explanation. While scientists have speculated about such a pathway for some time, Muddy Creek is the first documented case of its kind.

Loose ends surrounding the theory remain. The timing of the salt swell is one of them. “The abrupt increase in stream salinity in 2009 is not a good match for the unsteady trends in [oil and gas] development,” Bern says. “The greatest number of wells drilled on Lewis Shale exposures occurred in 2007 and 2008, prior to the salinity increase.” Still, some disturbances may have had a greater impact than others. Major upheavals, combined with dry conditions in 2008, could have set the stage for the following year’s dramatic rise in salinity.

Analyses of the creek’s 2013 and 2014 water years show that the effect of soil disturbance on salinity has diminished. Even so, the Wyoming Department of Environmental Quality still lists a section of Muddy Creek as salt-impaired.

The creek may be a bellwether for other waterways in fuel-rich arid lands. “The Mancos Shale forms soils across large swaths of the western US that often have high concentrations of salt,” Bern warns. If his theory is correct, the drought-stricken and warming West may need to manage development on such soils carefully to protect limited water resources.