Of Turkey Tails, Samoans, and how Culture Imbues Food

Our bodies and what we eat don’t exist in a social vacuum, Big Food knows this only too well
Michael Carolan

More than one livestock producer has told me that current food policy “maximizes assholes per acre.” I appreciate this off-color phrase as it emphasizes what ought to be obvious: that livestock intensification maximizes all elements of animal production, even those for which there may be no market. I calculate that there are roughly 50 billion animals in our food system at any given moment: 45 billion chickens/turkeys/ducks, 1.7 billion sheep/goats, 1.3 billion cattle, 1 billion pigs, 0.16 billion camel/water buffalo, and 0.12 billion horses. That is a lot of “undesirable” meat – 50 billion hearts, 100 billion eyeballs, and well over 100 billion feet. 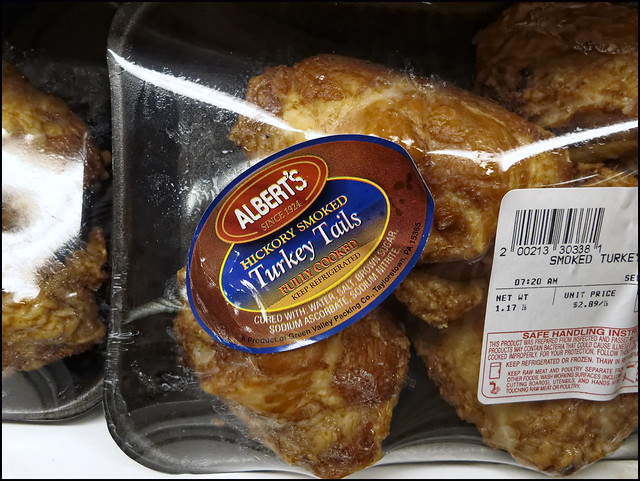 Mark TurnauckasNot long after World War II, US poultry firms began dumping turkey tails, along with chicken backs, into markets in Samoa. By 2007, the average Samoan was consuming more than 44 pounds of turkey tails every year

Consider the American turkey tail: a case of one segment of the US poultry industry quite literally sticking its asses in the face of another nation’s eaters. I mention it because it offers insight into how new foods become not so new – perhaps even becoming a “traditional dish” – and how much work must go into dislodging them when this happens.

The turkey’s hind end, which also goes by such irreverent names as the parson’s nose, pope’s nose, or sultan’s nose, is not all feathers, as many first presume. Turkey tails contain flesh, with about 75 percent of their calories coming from fat. If you are reading this in an affluent country you likely have never come across turkey tails in a retail setting. They remain a largely undesirable by-product of the poultry industry in most Western nations, even though roughly 230 million turkeys, and tails, were raised in the United States in 2015. Not long after World War II, US poultry firms began dumping turkey tails, along with chicken backs, into markets in Samoa. (Not to single out the United States, New Zealand and Australia are on record for having done the same thing with mutton flaps – sheep bellies – to the peoples of the Pacific Islands.) By 2007, the average Samoan was consuming more than forty-four pounds of turkey tails every year. That is quite the success story for a food product “that was essentially nonexistent sixty years ago,” to repeat what I was told by someone who grew up in Samoa in the 1930s and ’40s.

Based on what I have learned from meat traders in New Zealand, Australia, and the United States, animal protein was historically scarce and so was considered to be a luxury among Pacific Islanders. Following World War II, traders keyed in on importing meat products to this part of the world, even very low-quality cuts, given their desirability. It made alchemists out of entrepreneurs, as they were essentially turning waste into gold, or at least into American dollars.

Cheap food like turkey tails began displacing traditional foods, as the latter became more costly than imports and more time-consuming to prepare. So successful was this process of gastronomic integration that, over a generation or two, foods like duck tongue, turkey tails, and chicken feet began to be viewed not as foreign but as part of local cuisine. In the words of Becca, the Samoan quoted earlier who has since relocated to the United States, “If you were to interview my great-nieces and nephews [who still live in Samoa] and ask them to name a traditional Samoan dish, I bet some would answer by saying Budweiser and a barbecued turkey tail.” Turkey tails are also common street food throughout the Pacific Islands, making them an important source of income for many lower-income families.

“Their integration,” as Becca went on to explain, “has been so effective in part because of how we eat these foods.” The taste of these foods, it turns out, cannot be uncoupled from feelings of conviviality, friends, and family. Again Becca: “Turkey tails are rarely eaten in isolation. They’re eaten with friends and family, and, as I said earlier, often with something like a cold Budweiser in your hand. Even when you do eat it alone, if you get one on the street from the vendor, it’s during your downtime. You don’t eat turkey tails at work. You always eat them in moments of relaxation.”

There are a number of important lessons to be learned here. For instance, we have in the turkey tail a story of a once-foreign food becoming, with time, a national delicacy imbued with a deeply felt sense of companionship and comfort. When this happens, it becomes trickier to get people to eat less of it, as public health officials are learning when it comes to the turkey tail. Changing dietary patterns requires more than just nutritional education. Pacific Islanders know it is not the healthiest food choice. Yet many still choose it. Banning the food does not work either. They tried that in Samoa, and a black market quickly emerged to satisfy demand.

Becca, I learned, does not care for turkey tails anymore, even though she claimed to have “loved them” when she was younger, before she emigrated to the United States. When I asked her what changed, she acknowledged that it wasn’t education. She always knew that turkey tails were unhealthy: “I think all Samoans know that deep down. And yet still they eat it.” So what caused her to turn away from a food she had deeply enjoyed? Leaning back in her chair she cast her gaze upward for a couple of seconds, searchingly. “I guess you could say I went cold turkey,” she laughed. “They’re harder to find here, for one thing. But now I can’t stand them. The texture especially turns me off. The grease, the fat–it just doesn’t feel right in my mouth.”

While making those last remarks, her face changed. Tongue out, a frown: the look of disgust. Her aversion clearly went beyond the physical sensation of taste described by sensory scientists. And its roots extend well beyond the reaches of nutritional literacy campaigns. “Since moving to the States I have created new memories around new foods,” Becca volunteered. “When I get together with friends we’re not eating turkey tails or duck tongues, so I don’t have those strong sentiments toward the foods, either, which I think also makes them less appealing. My new taste preferences reflect the new reality I inhabit, not something from back in my childhood. I left that behind years ago.”

Adapted from No One Eats Alone: Food as a Social Enterprise by Michael Carolan; Copyright © 2017 by the author. Reproduced by permission of Island Press, Washington, D.C