Of Ingredients, Greed and Expediency: Big Chem and the Big Stink

Jon Whelan’s documentary Stink! proves, among other things, that the feminist insight “the personal is political” remains true. According to his film, the untimely death of Whelan’s wife Heather from breast cancer, combined with the pungent odor of brand new pajamas he bought for his daughters, propelled the New York-based writer/director to investigate the chemical industry. Like Ulysses with a camera, Whelan embarks on an odyssey that takes him from corporate boardrooms to the halls of Congress, pitting him against the Cyclops of Big Chem.

Bought as a Christmas present, the pajamas’ noticeable scent prompted Whelan to phone HQ Justice, the company selling the bedclothes. Unable to get answers as to the cause of the PJs’ smell from customer service reps, and after corporate executives declined to take or return his calls, Whelan sent the pajamas to a laboratory for testing, which turned up some dubious results.

Tired of being stonewalled, like Michael Moore hot on the heels of General Motors’ CEO in 1989’s Roger & Me, Whelan tracked down Justice’s then-CEO Michael Rayden at a Manhattan shareholders meeting. The documentarian is admitted to the meeting because he owns a single share of the publically-owned corporation. Confronted and questioned by Whelan, Rayden confesses he doesn’t know all of the chemicals that Justice uses.

But the 90-minute nonfiction film goes beyond just the ironically named Justice to take on the whole ethos and corporate culture of “Better Living Through Chemistry,” which chemical giant DuPont promoted beginning in the 1930s.

Starting with his initial phone calls to Justice, which are recorded and presented onscreen along with corporate employees’ voices, Whelan stumbles upon an astounding fact: The “Cancer Loophole” — Corporations do not have to disclose all of the ingredients on their products’ labels.

Under the innocent-sounding rubric of “fragrance,” many chemicals in perfumes, shaving creams, colognes, etc., do not have to be revealed because under existing law they are regarded as “recipes” similar to fast food’s secret sauce or Coke’s formula. Thus, they are regarded as “trade secrets” and legally protected like proprietary private information. This includes not having to disclose carcinogens and phthalates — endocrine disrupting chemicals impacting hormones — in products. People outraged by how financial deregulation enabled Wall Street to wreck the economy in 2008 should likewise scrutinize governmental oversight — or lack there of — of Big Chem.

While Mike Nichols depicted Karen Silkwood in a 1983 feature starring Meryl Streep about a metallurgy worker who tried to blow the whistle on a plutonium-processing plant, Whelan has Brandon Silk. This high school student is repeatedly hospitalized because, according to Stink!, although he doesn’t use Axe grooming products, some male classmates do. According to the film, the ingredients of these fragrances, deodorants, and antiperspirants, cause Silk’s throat to close, making it hard for him to swallow — just a whiff sickens him.

Although these household and other products may contain harmful chemicals, Axe’s TV commercials, targeting vulnerable teenage boys, depict hordes of scantily clad young women ravishing an Axe-wearing young man. Axe does not divulge the ingredients in its products. Skeptical about Axe’s lack of disclosure Brandon’s mother, Rosa Silk, asks the question that sums up Stink!’s main point: “What are you hiding?”

Axe isn’t the only offender. The documentary goes on to expose how some stores, such as Abercrombie & Fitch (notorious for sexualized advertising), deploy fragrances to affect moods of shoppers in their stores. 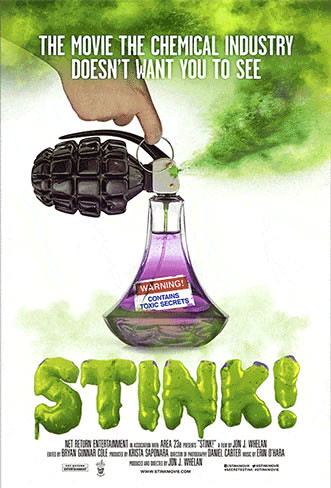 This problem has metastasized to the point where, according to Stink!, even some charities are suspect. The doc alleges that at least one 501(c)(3) tax-exempt nonprofit organization investing in anti-breast cancer research opportunistically ballyhoos “Promise Me” perfume. Additional research conducted for this review yielded similar concerns cited by separate sources not mentioned in the wide-ranging documentary. In 2012, for example, AlterNet reported on the Susan G. Komen for the Cure’s involvement with the perfume: “It was discovered that the organization’s pink ribbon-branded Promise Me perfume contained hormone-disrupting chemicals like galaxolide.”

Stink! also rather disturbingly exposes that federal agencies designated to be the public’s governmental watchdogs — including the Food and Drug Administration and Environmental Protection Agency — have little actual regulatory and oversight powers vis-à-vis the corporate chemical behemoths when it comes to disclosure of chemical use. Much of Big Chem’s disclosure is, the nonfiction film charges, “voluntary” — as to be expected, few companies comply. Chillingly, Stink! contends that this lack of mandatory disclosure even extends to one of environmentalists’ biggest enfants terribles, fracking, which the doc contends includes a process that unleashes a “toxic stew of chemicals.” At the possible expense of public health, the ingredients in the frackers’ stew are protected from disclosure because they’re — you know! — “trade secrets.”

Talk about “fracked up:” Whelan and director of photography Daniel Carter take their camera to the topsy-turvy Alice in Wonderland that is Washington, DeCeit. There, then-Senator John Kerry chews out FDA bureaucrats onscreen, proclaiming “you don’t protect America,” because their toothless bureaucracy can’t demand chemical disclosures or product recalls.

Stink! also highlights that the European Union bans 11,000 ingredients and chemicals permitted in the United States, adding that even developing nations, such as Egypt, have been far more proactive on this front than the US. Andy Igrejas, national campaign director for Safer Chemicals, Healthy Families, one of several eco-activists interviewed onscreen, poignantly points out: “Made in America should be a positive thing, not a warning label.” The doc cleverly adds that permissive American policies can actually undercut US competitiveness and trade — the EU and other nations may not want to import products when companies don’t disclose if they use ingredients violating foreign laws.

Whelan also waylays New Jersey GOP Congressman Leonard Lance, a Big Chem mouthpiece who received $79,000 in contributions from the Health Products/Pharmaceuticals industry in 2015-2016 according to the Center for Responsive Politics’s www.opensecrets.org. According to the website, which is dedicated to “informing citizens about how money in politics affects their lives,” Lance’s largest donor for this period is NJ-headquartered Celgene Corp., a global biopharmaceutical company that contributed $12,400, while California-based Amgen Inc., a biotechnology company with a worldwide reach, came in second, donating $5,100, mostly from its PAC. Lance sponsored the Orwellian-named Cosmetic Safety Amendment Act of 2012, which Stink! argues would actually have made makeup more unsafe had it passed.

Inside the US Capitol Building our man Whelan catches up with Cal Dooley, a former Democratic Congressman who “traded up,” and has, instant presto, become the president and CEO of the American Chemistry Council (ACC), earning $1 million-plus per year. Whelan wails into Dooley, asking: “Does a consumer have a right to know if there’s a carcinogen in a product for a baby?” (Indeed, inquiring minds want to know.) Whelan plaintively adds, “Industry wants to have it both ways. They don’t want to prove chemicals are safe and they don’t want to disclose their ingredients.” Conscious that the camera is running, Dooley appears to remain affable during the encounter as the Big Chem mouthpiece double-talks Whelan, spewing the company line until he can make his getaway.

Whelan also exposes the corrupting role of lobbying in capitalist America’s pay-for-play political system and tangles with ACC lobbyist Stephen Rosario, who predictably argues “bans are very drastic.” However, Stink! claims only five out of 80,000 ingredients have actually been prohibited in the US.

Stink! also touches on the ACC’s lobbying with respect to the 1976 Toxic Substances Control Act. While Senators Barbara Boxer (D-CA) and Edward Markey (D-MA) strive to strengthen the EPA-administered TSCA, which regulates the introduction of new or already existing chemicals, ACC predictably advocates “modernizing” the TSCA with legislation that Stink! argues would defang and further de-regulate the Act.

Why does Big Chem resist revealing all of its ingredients, including chemicals that aren’t even banned (at least in America)? “Businesses are writing the rules… that increase profitability,” entrepreneur Jeffrey Hollander, who has argued for sustainable business practices and is formerly of Seventh Generation, says in the film. Identifying components that are carcinogenic and/or otherwise considered to be health hazards could deter consumers from using those products and perhaps lead to their prohibition. Thus labeling — and truth in advertising — can cut into corporations’ bottom lines, just as labeling foods using GMOs could reduce Monsanto’s profits.

Detractors may argue Whelan’s politics are too personal and that, considering his wife’s early death and anxiety concerning his young daughters, he’s far too emotionally involved to objectively report what he himself calls a “love, crime and mystery story.” But others are likely to find that Whelan rightfully “objects” to unfair possible hazards, and in making such a big stink over Big Chem’s refusal to provide disclosure, he’s a muckraker in the tradition of Upton Sinclair, whose 1906 novel The Jungle laid bare the meatpacking industry’s unsanitary conditions. And by shining a light on Big Chem’s big cover-up in his engaging, well-made film, Jon Whelan reminds us, as the Beatles sang in their 1968 “White Album:” “Everybody’s Got Something to Hide Except Me and My Monkey.”