The Obama administration unveiled its first major federal regulation on fracking today and the backlash from the energy industry and its supporters was swift. Less than an hour of the announcement, two energy groups — the Independent Petroleum Association of America and the Western Energy Alliance — filed a lawsuit challenging the rule, calling it “a reaction to unsubstantiated concerns.” Meanwhile, environmental groups say the rule falls short of providing Americans the protection they deserve. 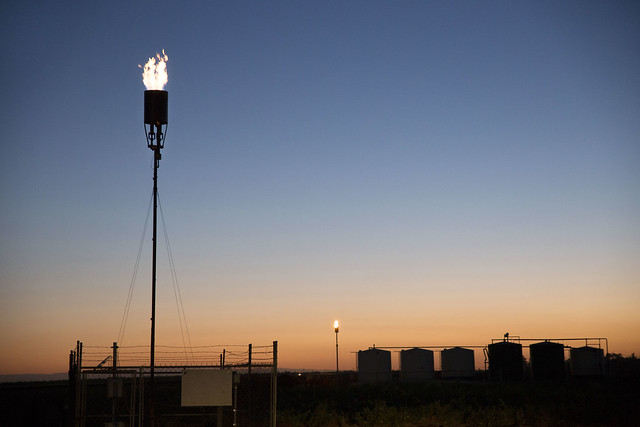 Photo by Sarah Craig/Faces of Fracking The rule, they point out, applies only to oil and gas drilling on federal lands. Which means, in regions like Pennsylvania, Texas and North Dakota, where fracking is most prevalent, drilling will still be governed by state and local laws.

The new rule — which took the Department of Interior four years to finalize and included numerous stakeholder meetings and more than 1.5 million public comments — will govern drilling operations on federally managed and Native American lands. There are more than 100,000 oil and gas wells on federally managed lands. Of wells currently being drilled, over 90 percent use hydraulic fracturing.

Key components of the new regulation, which is scheduled to take effect in 90 days, include:

* Companies disclose the mix of chemicals they are using in the hydraulic fracturing process within 30 days of completing fracturing operations;

* Higher standards for interim storage of recovered waste fluids in order to mitigate risks to air, water, and wildlife;

* Companies to submit more detailed information on the geology, depth, and location of preexisting wells before they begin drilling, so that the Bureau of Land Management can to better evaluate and manage unique site characteristics.

“Current federal well-drilling regulations are more than 30 years old and they simply have not kept pace with the technical complexities of today’s hydraulic fracturing operations,” Interior Secretary Sally Jewell said in a statement. The new rules provide “a framework of safeguards and disclosure protocols that will allow for the continued responsible development of our federal oil and gas resources,” she said.

While the energy industry and its supporters are calling the regulation an example of federal overreach — Senate Republicans introduced a bill on Thursday to block the regulations from being implemented — environmental groups say it doesn’t do enough to protect the environment and the public from the negative impacts of fracking, which include groundwater contamination and increased risk of earthquakes.

The rule, they point out, applies only to oil and gas drilling on federal lands, which accounts for only 11 percent of the natural gas and 5 percent of the oil the US consumes. Which means, in regions like Pennsylvania, Texas and North Dakota, where fracking is most prevalent, drilling will still be governed by state and local laws. (The Senate bill, tabled by Senate Environment and Public Works Committee Chairman Sen. Jim Inhofe, argues that states should have the sole authority to regulate fracking on federal lands.)

The new regulation has been especially disappointing for groups that were seeking an outright ban, or at least a moratorium, on fracking in the United States.

“Our US national parks and public lands are some of our most treasured places and should be protected from fracking,” actor Mark Ruffalo, an advisory board member for Americans Against Fracking, said in a statement. “Yet instead of following the lead of New York in banning fracking, the Obama Administration has devised fracking regulations that are nothing more then a giveaway to the oil and gas industry. These regulations take from us our heritage and hands it to an industry that doesn’t need a hand out. Industrialization and parks don’t belong together.”

Meanwhile, Representatives Jan Schakowsky (D – IL) and Mark Pocan (D – WI), who had introduced legislation in the previous Congress to ban fracking on all federal lands, are planning on reintroducing the bill during this session.

“Our Public Lands are too precious to spoil with fracking,” Schakowsky said in a statement. “The BLM regulations are a step in the right direction, but more must be done to ensure that public lands are protected and preserved for future generations. We will continue to work to completely ban fracking on public lands.”