The Oakland City Council took a strong stand against coal last night. Following a long and often emotional city council meeting — during which whistles and cheers were at times met with boos and yelling — the council passed an ordinance prohibiting the storage and handling of coal and petcoke at Oakland facilities, and a resolution that would specifically apply the ordinance to the Oakland Bulk and Oversized Terminal (OBOT), which is being built on the old Oakland Army Base. 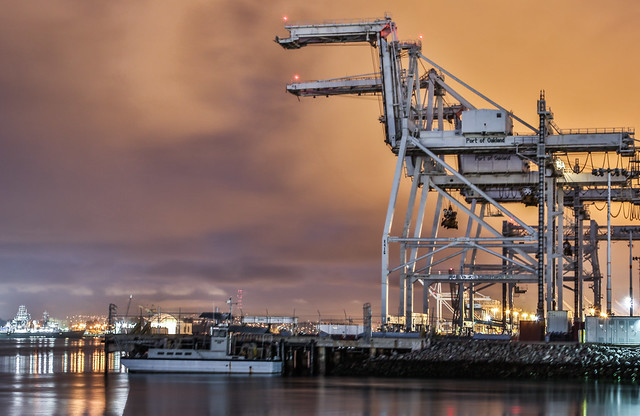 The meeting drew hundreds of impassioned Oakland residents, including representatives from the labor, faith, environmental, and health communities, as well as the terminal developers. Those speaking against the terminal emphasized that West Oakland already suffers the effects of disproportionate air pollution. They argued that added particulate pollution tied to the coal export terminal could elevate the risk of health problems like asthma, cancer, and lung and heart disease.

Several speakers also pointed to climate change and it’s impact both globally and in Oakland. “There is strong evidence that if coal is not shipped from OBOT, it will not be shipped and combusted at all,” Linda Rudolph, director of the Climate Change and Public Health Project at the Public Health Institute, said, speaking to the city council prior to the vote. “If coal is shipped from OBOT, the greenhouse gas emissions from burning that coal will be greater than that from all five bay area oil refineries. It will contribute significantly to climate change and climate change is the defining health challenge of this century. It’s a serious threat to the health of Oakland residents.”

Those speaking on behalf of the project said that measures could be taken to mitigate the impacts from coal and emphasized the jobs associated with the terminal project. “[The terminal] will be the source of generational prosperity for many of the… un- and underemployed residents, and most important, it will be safe,” said Jerry Bridges, president and CEO of Terminal Logistics Solutions, which will operate OBOT. (Labor representatives, however, spoke out strongly against the use of the terminal for coal shipments, rejecting the idea that the issue is one of jobs versus community health or justice, and pointing out that the terminal will create jobs regardless of the specific commodities shipped through it.)

The buildup to the vote has been considerable. Oakland residents and activists have been advocating against coal exports since the spring of 2015, when plans to use OBOT for coal were first revealed. On Friday, they received a sign that their efforts might pay off when Oakland City staff released a report finding that the use of the terminal for coal exports would negatively impact the health, safety, and general welfare of Oakland residents, and recommending that the City Council pass both the ordinance and the resolution applying it to OBOT.

Furthermore, staff concluded that the city had legal authority to ban the export of coal through Oakland. (The original agreement between CCIG and the City of Oakland did not specify which commodities would be shipped through the terminal, and prohibited modifications based on new laws. However, it included a caveat allowing for any modification that might be necessary to protect local health and safety.)

The staff report itself was based in large part on a city-commissioned study on the impacts of the terminal prepared by Environmental Science Associates, that underscored the public health, safety, and environmental impacts of transporting, storing, and handling coal at the proposed shipping terminal. These include increased exposure to particulate pollution in communities already overburdened by pollutants, health and safety risks related to the spontaneous combustion of coal, and increased global CO2 emissions associated with the burning of exported coal in power plants overseas.

The environmental consultancy’s report reinforced findings from two additional studies, one commissioned by city council Member Daniel Kalb, released just a day earlier, and a second by the Public Health Panel on Coal in Oakland.

Kalb was optimistic going into the city council meeting. “I’m confident we will take action that will protect the public health and minimize safety risks,” he said, speaking with Earth Island Journal by phone before the meeting. “I think there is plenty of analysis to suggest it is a serious health risk to a lot of people, especially workers, and there are substantial safety risks.”

The Oakland coal issue has spurred action far beyond city limits as well. In February, California State Senator Loni Hancock, D-Oakland, introduced four bills targeting coal exports in California generally, and the OBOT site specifically. The State Senate passed two of the bills in June — one that would prohibit the State Transportation Committee from funding coal storage or transportation projects in or adjacent to disadvantaged communities, and another that would require additional environmental review of the proposed Oakland project. The two bills are now under consideration by the State Assembly.

Environmental groups have also been focusing on Utah, where pro-coal actors have worked to secure funding for the Oakland project as a means of ensuring export capacity for Utah coal. Specifically, the state has pledged $53 million in taxpayer funds toward a loan for the OBOT project in exchange for shipping rights at the terminal.

The funds were initially provided through a loan by the Utah Community Impact Fund, using money that was supposed to go towards mitigating impacts of mineral extraction in Utah. When that usage of funds was called into question, the Utah legislature approved a bill essentially swapping out those funds for other money to get around the rules.

Last week, Earthjustice, Sierra Club, and Heal Utah, among other groups, sent a letter to the US Department of Justice and the Department of the Interior demanding an investigation of the loan on legal and ethical grounds.

“I think some people want to frame this as a story about liberal West Coasters who are worried about climate change in the abstract versus coal miners in Utah,” Ted Zukoski, an Earthjustice attorney who has been following the Utah developments, said. “This is about Utah, and corporations they are working on behalf of, trying to offload the environmental damage to another community, cashing in while someone else suffers.”

Throughout the four-hour Monday night city council meeting, many anti-coal activists, as well as council members, made a point of emphasizing that they were not opposing the Oakland Army Base redevelopment project or OBOT more generally, but rather the use of the terminal to export coal.

Prior to the meeting, David Smith, an attorney representing the developer, California Capital Investment Group, told the East Bay Express that they would go to court to challenge a coal ban.

Gregory McConnell, representing CCIG, reiterated this sentiment at the council meeting. Speaking to the city council in reference to a letter the company sent the council earlier in the day, he said “the developer will have no choice but to pursue all legal remedies to protect their interests” if the council voted to ban coal. He suggested that the city could be liable for hundreds of millions of dollars for breaching the development agreement.

“So this is not going to end tonight even if the decision that you make tonight says that you ban coal,” McConnell said.

Environmental and community groups, however, praised the decision. “We stand with community groups and commend the City for taking a strong stance against coal and using its powers to protect its residents,” Irene Gutierrez, an attorney with Earthjustice, said in a statement.

“We are totally delighted everybody came through that was there tonight,” said Margaret Rossoff of No Coal in Oakland campaign, a grassroots organization campaigning to stop coal from being by rail through Oakland, right before joining a celebration with friends following the vote.

Both the ordinance and the resolution passed by 7 to 0 vote — one council member was excused from the meeting. The council will hold a second reading of the ordinance on July 19.

Clarification: An earlier version of this story identified Margaret Rossoff as working with the Sunflower Alliance. Her work on this campaign was through No Coal in Oakland.