When Helen Slottje quit her high-powered, well-paying job at a corporate law firm in Boston and moved to Ithaca to be with her new husband, David, she was hoping to make a quiet new life for herself amid the bucolic scenery of upstate New York. For a while everything went according to plan. She helped out at David’s family business. She began meditating. She adopted a vegetarian diet. It was a real shift, she says, to go “from corporate lawyer to … having a better quality of life.” 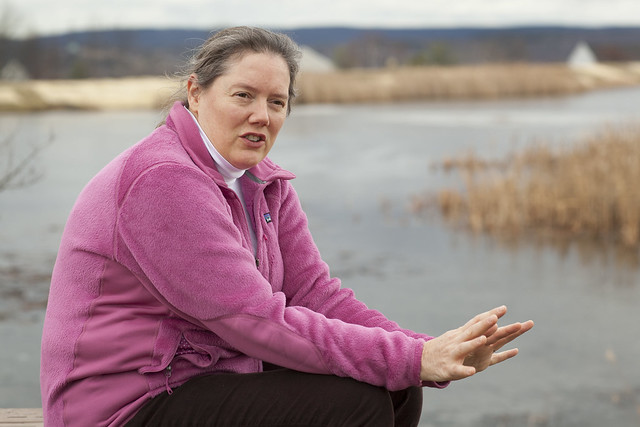 Photos courtesy Goldman AwardsSlottje’s efforts to halt the natural gas rush near her new home have become just as consuming as her former corporate job — with all of the long hours and tremendous stress, but none of the nice salary.

Then, in 2007, she learned about natural gas fracking. Slottje first heard of fracking as she tried to help her brother-in-law find a farm to purchase in the Ithaca area; every property she looked at had recently signed a drilling lease with one gas company or another. She recalls being concerned, but then the issue slipped off her radar screen. Until, a few years later, she went to a community meeting to learn more about the controversial technique. Many of the speakers at the meeting — a lawyer, a former county executive — said a gas boom in upstate New York was inevitable; the best thing local communities could do was to try to prepare for the inevitable dislocations, the audience was told. The last speaker had a different message. He showed photos of what gas drilling looked like just over the state line, in Pennsylvania, and warned that the same thing was about to happen in New York. Slottje was horrified.

“I couldn’t believe that in 2009 we were having a conversation about whether something that looked like that was a good idea or not,” she says. “It seemed like such a facially, patently bad idea. I looked at the pictures — the pipeline clearings, the huge tracks through the middle of forests, and, most disturbingly, the drill pad sites with chemicals on pallets, pictures of big waste pit lagoons — and I superimposed those pictures over where I lived. I felt physically sick at that point.”

That’s when Slottje decided she needed to get involved in the movement to stop fracking in the Empire State. Soon her efforts to halt the natural gas rush near her new home had become just as consuming as her former corporate job — with all of the long hours and tremendous stress, but none of the nice salary.

Using the skills they had developed during their time as corporate lawyers, Helen and David helped the grassroots anti-fracking activists to carefully parse the voluminous reports from New York Department of Environmental Conservation. They gave fracking opponents pointers on how to prepare and deliver effective public testimony to be used at local and state hearings. They worked with residents in the town of Horseheads, NY to file a suit (ultimately unsuccessful) to shut down a proposed 92-acre drilling services facility. And eventually, after carefully combing through the New York State Constitution, Helen Slottje found a way to empower local communities to keep fracking out of their areas.

New York law, like most state laws, reserves for the state government the right to regulate business operations. Municipal and county governments, however, retain the ability to set zoning ordinances that decide what kind of businesses or activities can go where. Under the home rule provisions of New York State law, Slottje concluded, towns could use their zoning ordinances to reject gas drilling within their jurisdictions. “While you couldn’t regulate the industry, you could just say no.” 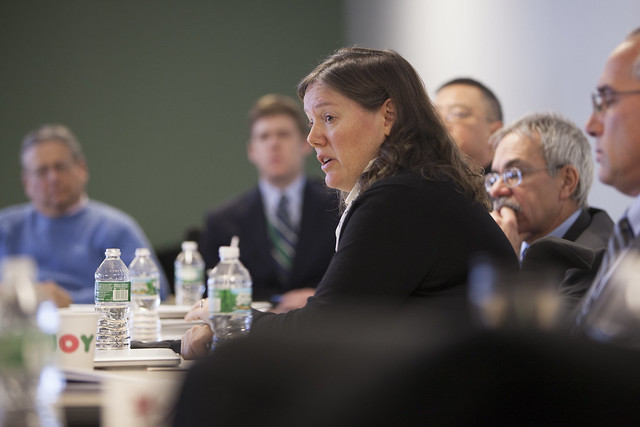 Slottje used her experience as a corporate lawyer to find a way to empower local communities
to keep fracking out of their areas.

That was in 2010. Four years later, 172 towns throughout New York have passed fracking bans or moratoria. The strategy has spread to other states across the country, as communities from Pennsylvania to Ohio to Colorado have voted to prohibit fracking, which has been linked to ground water contamination, small earthquakes, impacts on human health, and at least one massive fish kill.

Slottje’s strategic creativeness and personal tirelessness has won her huge praise from other fracking opponents in New York.

“She is the Winston Churchill of the anti-fracking effort — Winston Churchill in the best sense, a person of fearless resolve,” the author-activist Sandra Steingraber told me. “Helen’s a fighter. She and David both.”

Another die-hard fracking opponent, Maura Stephens, co-founder of The Coalition to Protect NY, says Slottje is “just an amazing woman. She is indefatigable, smart, tenacious, tough, funny, and loving all rolled into one. She gives lawyers a good name.”

Now, Helen Slottje has won international recognition for her efforts. Tonight in San Francisco, she will be honored as one of the recipients of the 2014 Goldman Environmental Prize, the world’s most prestigious recognition for outstanding environmental activism.

The achievement and recognition haven’t come without personal cost. Since 2009 the Slottjes have dedicated themselves full-time to the anti-fracking movement, often working seven days a week and driving back and forth across New York as they offer legal advice to town considering a fracking ban. All of the work has been done for free.

To support themselves, the Slottjes have had to dip into their retirement savings. The couple also has faced harassment and intimidation from the gas companies. Helen says she has been followed to her car by industry representatives after community meetings, and for a couple of years a blogger for the industry website Energy in Depth ran a kind of Internet guerilla campaign against the Slottjes.

Helen wears the negative attention like a badge of honor. “It’s annoying, but nothing that we took very seriously,” she told me. “It’s like, take a number. You are not the first person I have annoyed. And you are not going to be the last.”

In person Slottje is hard-charging and fast-talking, with an attorney’s knack for delivering her thoughts in fully formed paragraphs. She carries herself with the intellectual confidence of someone who attended the University of Pennsylvania and Harvard, and it’s clear she is delighted by the fact that she has been able to use her training as a corporate lawyer to protect the public interest. Her personal narrative is less Damascus Road conversion tale than a story of professional jujitsu in which she has found a way — as the classic organizer’s dictum goes — of using the master’s tools to take down the master’s house.

“With my corporate law background, I am not going to buy the idea that there is nothing that can be done,” she told me while discussing the mood in New York in 2009 and 2010, when it seemed there was no way to hold off the drilling companies. “That sounds like typical corporate bullshit to me, and then it becomes a self-fulfilling prophesy. … With a corporate law background, you don’t ever tell a client that they can’t do what they want to do. You find any number of ingenious ways to get it done.”

That, of course, is what she did when she pioneered the idea of using local zoning ordinances to head off the gas industry. The strategy is now facing its greatest test to date. A gas company, Anschutz Exploration Corporation, has sued to overturn the fracking ban put in place by Dryden, NY, one of the first communities to pass a drilling ban designed by the Slottjes. In Februrary 2012 a New York trial court ruled in favor of Dryden, and a state appeals court upheld the lower court’s ruling in May 2013. The case has since been appealed to New York’s highest court. Oral arguments are expected to take place in June, and the New York justices should hand down a decision by September.

Helen Slottje is confident they will win. “People understand and believe that there is no reason they shouldn’t be able to make local land use decisions,” she told me. “People get that they should have control over what happens in their community.”