It’s common knowledge these days that nutrient-rich fruits and vegetables are part of a healthy, well-rounded diet. But according to the Environmental Working Group’s (EWG) annual “Dirty Dozen” list, there are some conventional produce items that it may be best to avoid. 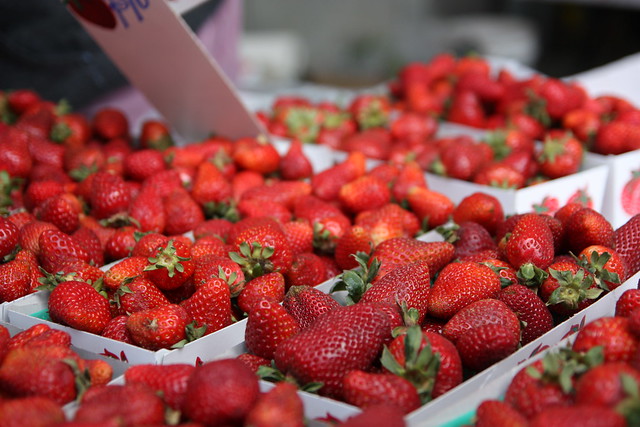 Photo by snekse/Flickr Conventional strawberries are treated with large quantities of pesticides, making them among the most pesticide-contaminated produce sold in the United States.

For the third year running, conventional strawberries topped the list of pesticide-contaminated produce. According to EWG’s analysis, 99 percent of sampled strawberries tested positive for residues of at least one pesticide, with an average of 7.8 pesticides detected per sample. The humble strawberry’s reign on top of the Dirty Dozen list isn’t entirely surprising — on average, every acre of strawberry field in California is treated with some 300 pounds of pesticides, including sprayed chemicals and toxic fumigants injected directly into the soil. But it is worrisome, given that the average American eats about 8 pounds of strawberries a year.

Of course, conventional strawberries, are far from the only contaminated produce making its way into American’s grocery carts. Overall, nearly three-quarters of conventional fruits and vegetables contain pesticide residue even after they are washed.

“I think most people are just really astounded to find out that about 70 percent of grown produce has measurable amounts of pesticides on them,” says Sonya Lunder, a senior analyst with EWG and lead author of the report. “People see food as being so clean, and symmetrical, and fragrant, and when you’re buying it at the grocery store, you’re hardly thinking about the farm fields.”

The EWG analysis is based on US Department of Agriculture testing, which found a total of 230 different pesticides and pesticide breakdown products on sampled produce. Some of the pesticides are relatively benign, at least in terms of human health. Others have been linked to serious risks, including damage to the brain and nervous system. Evidence suggests that humans are particularly vulnerable to exposure in utero and during early childhood. Farmworkers and their children, who are routinely exposed to these pesticides, are among the most at risk groups.

But we are still learning about the full range of potential effects of pesticide exposure. A 2017 study published in the Journal of the American Medical Association found that consumption of two or more servings of produce with high pesticide residues was associated with a 26 percent lower chance of successful pregnancy. Studies have found similar connections between pesticide exposure and male reproductive health.

Given the dangers associated with exposure, what are the other fruits and vegetables to avoid? In descending order: spinach, nectarines, apples, grapes, peaches, cherries, pears, tomatoes, celery, potatoes, and sweet bell peppers, with hot peppers receiving a (dis)honorable mention.

The statistics for pesticide residues found on some of these crops are staggering. On average, spinach samples contained 1.8 times more chemical residue by weight than any other produce. Almost 94 percent of nectarines contained two or more pesticides. And conventional pears, which have been subjected to increased pesticide use in recent years, contained several pesticides at relatively high levels.

Several of the dirty dozen crops — including spinach, apples, and cherries — are notable for their contamination with pesticides that are illegal in Europe but can be used in the US. As EWG points out in its report, legal limits aren’t always safe: “Some liken pesticide tolerances to a 500 mph speed limit: If the rules of the road are so loose that it’s impossible to violate them, nobody can feel safe.”

The dirty dozen list remains fairly consistent from year to year, something Lunder attributes to different vulnerabilities and “persistent differences in how these crops are grown.” As she explains, strawberries sit right on the ground, have no protective outer peel, and have both high water and high sugar contents. As a result, they are “just going to be very vulnerable to any soil dwelling microbes [and] any insects” compared to, say, an avocado or an onion, and as a result, subject to more intensive pesticide use.

Aside from the human health impacts linked to pesticide ingestion intensive pesticide use has a range of environmental impacts, including contamination of soil and water, and harm to wildlife like birds, fish, and beneficial insects, including pollinators.

But if organic simply isn’t an option, what’s a health conscious shopper to do? EWG suggests a look at their “Clean 15” list of conventional produce with low pesticide exposure. Avocados and sweet corn top that list — pesticides were detected on less than 1 percent of samples of either crop. Tropical fruits like pineapple, mango, and papayas are also relatively safe bets, and as far as getting your daily dose of veggies, EWG suggests cabbage, asparagus, and broccoli among other options.