On a warm, sunny, late June afternoon, Colin Donihue, a postdoctoral fellow at Harvard University in the department of organismic and evolutionary biology, spots a greenish-colored lizard scrambling into a large compost pile in the Fenway Victory Gardens, a seven-and-a-half-acre public gardening area in Boston. He carefully stalks the reptile, then moves into position with his lizard noose — a collapsible, 14-foot-long graphite pole with a loop of thread on the end. 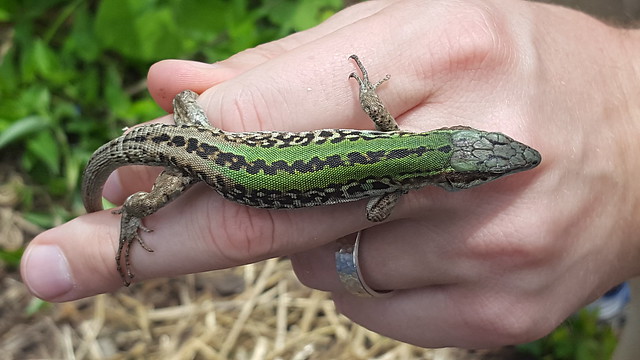 photo Tim BeaulieuColin Donihue holds an Italian wall lizard in a public gardening area in Boston. The species is the first known lizard to live within the city.

Siting the lizard in a pile of dead twigs and branches, Donihue slowly maneuvers the tip of the pole toward the skittish animal. While he had spotted a few other lizards earlier, he was unable to get close enough to catch them. The pole trembles a bit, but he manages to slip the tiny noose over the lizard’s head. As he lifts the animal off the compost pile it flops around wildly like a fish on a line. As Donihue gently wraps his hand around the feisty creature, it opens its jaws wide to try to bite him before eventually settling down.

The lizard is quite colorful, mostly green on its back with a line of dark brown patches down the middle and along its sides, and a whitish belly. He can tell it’s a male by its relatively large size, as well as its triangular-shaped head and wide jaws.

Had Donihue caught this lizard in Italy or adjacent Mediterranean countries, its natural home range, or even in New York City or Greenwich, Connecticut, where they’ve been introduced and have managed to thrive for many years, it would have been no big deal. But this is the first time these animals have ever been documented in Massachusetts. In fact, there are no known lizards of any type in Massachusetts, so this is quite a surprising discovery. “It’s really incredible that they’re this far north,” says Donihue. “This is their northernmost range in North America and certainly the coldest climate they’re found in.”

Elizabeth Bertolozzi, vice president of the Fenway Victory Gardens, had emailed Donihue photos of lizards she had seen in her garden plot last fall, which he identified as Italian wall lizards. “I first found out about them in an email tip on October 3,” explains Donihue. “I immediately went home, grabbed my camera and lizard noose, and jumped on the T to go check them out.”

After finding the lizards and taking two voucher specimens, Donihue led a group of ten interested lab mates back to the gardens on the next sunny day. They conducted a more in-depth survey and found many more lizards. Donihue estimates the population last year was about 35 to 50 individuals.

“So far this year we’ve seen seven,” says Donihue. “That said, I think for every lizard we see there’s probably two or three others hiding. So I bet the population is around 20 to 25. It’s hard to get a good census, given how thick a lot of these garden plots are.”

Donihue guesses the mortality over the winter was really high, which would explain why they’re not seeing as many lizards this summer. But the females are laying eggs now, and in another three or four weeks when the babies hatch they’ll probably see a lot more lizards around. “They’ll be around for the remainder of the year, and will be active into the fall,” says Donihue. “It will look like a lot more lizards, but I bet we’ll have a similar situation, with a pretty big die-off over the winter.”

According to Donihue, Italian wall lizards are native to the Mediterranean areas of France, Italy, and adjacent countries, so surviving Boston winters is a challenge for the cold-blooded animals. He has been studying the population of Italian wall lizards living in Greenwich, Connecticut, and says that the lizards there survive by overwintering in people’s houses.

He theorizes that the Fenway lizards survive the cold by burrowing into compost piles, which is where he found most of them when he surveyed the Victory Gardens last fall. Decomposing compost generates a small amount of heat, he explains, which is probably enough to keep at least some of the lizards from freezing.

The preliminary data from DNA analysis shows that the Boston lizards are most closely related to the population in New York City, but Donihue thinks it unlikely the lizards got there from New York on their own. “We know that there are lizards down in Connecticut that have moved … from New York,” he says. “And we’ve seen stepping-stone populations all the way up to their northernmost extent, just north of Greenwich.” But he doesn’t believe that’s how they got all the way to Boston, because none have been seen in any areas in between — above Greenwich or Bridgeport, and Boston. “So even though the train tracks connect [from New York to Boston],” he explains, “we’d expect to see lizards in between if they were getting here on their own four legs. So I think people were involved.”

Donihue speculates that the first Boston lizards may have been released either by pet owners or by people who inadvertently brought them home from another location. He also says that since a lot of reptiles move around in garden supplies, lizard eggs could possibly have arrived in shipments of plants or mulch, although most of the mulch used in the Victory Gardens is of local origin, so he pretty much discounts that theory.

According to Donihue, the wall lizards are almost entirely insectivorous, and since there’s such a variety and abundance of insects in the gardens they don’t have to try very hard to find food. “This is a really great habitat for them,” says Donihue. “They’ll just be cruising around looking for insects.” Additionally, he says that while garter snakes, birds of prey, and cats might potentially prey on the lizards, and rats might eat lizard eggs and sleeping lizards, for the most part there aren’t many predators around here.

Asked why it’s important to study the Boston lizards, Donihue points to the fact that they’ve managed to land here and get a toehold. “First and foremost, it’s just a cool story,” he says. “Lizards in Boston?! It’s unusual, weird, and exciting.”

Despite being an exotic invasive species, the lizards are not doing any harm says Donihue, and are not pushing out any other species. ”There aren’t other lizards anywhere near by and these lizards are at low densities so I don’t think they’re going to severely impact insect populations,” says Donihue. He added that the habitat available to the lizards is pretty circumscribed by high density apartment buildings that surround the gardens, and he doesn’t think their populations exploding is very likely at all.

He also says peoples’ reactions have been almost 100 percent positive. “People are really excited about having lizards in their backyard,” says Donihue. “It’s a unique ecological visitor.”

Donihue, who received his Ph.D. in ecology and evolutionary biology in 2016 at Yale, says he intends to study this population of lizards as part of his postdoctoral research at Harvard. “Broadly, I’m interested in understanding how species are adapting to humans and what that means for ecosystems,” says Donihue. “I’ve been studying these dynamics across a gradient of time and land-use intensities from traditional pastoral practices in East Africa, medium-intensity farming in Greece, and now lizards adapting to urban settings.”

With regard to the newly discovered lizards in Boston, Donihue says he wants to understand more about how they got there, how they’re settling into this novel setting, and what impacts they might have on the plants and animals in the Fenway.

To help accomplish his research objectives, Donihue is trying to precisely determine where the lizards are, when they’re active, their population estimates, etc. He says he’d like to do a study for a population-density estimate in which lizards would be captured and marked with different colored plastic beads to be able to identify individual lizards later if they’re spotted or recaptured by researchers. He’d also like to do a diet study as well as a thermal physiology experiment to see if their temperature tolerances have shifted (i.e., whether they are becoming more cold tolerant).

Donihue estimates the male Italian wall lizard he caught today is about eight inches long. He says males can grow a bit larger, up to 10 or 11 inches from the tip of their snout to the tip of their tail, with females typically being a little smaller than males. He admires the lizard for a few moments and then takes some pictures, posing for a photo holding the lizard with the Prudential Tower — an iconic Boston landmark — in the background.

Asked whether the lizards themselves might become a Boston icon someday too, Donihue smiles and replies, “I would love that! I’m still trying to get the name ‘green monster’ to catch on,” making a connection between the color of the lizards and the legendary 37-foot-high green left-field wall at nearby Fenway Park, home of the Boston Red Sox.

He releases the lizard back into the compost pile where he found it. “I saw four and caught one,” says Donihue. “A good day at the gardens.”