Imagine you’re sleeping and a friend comes over unannounced. You might hang out for a few hours or you might walk them out. Either way, they eventually leave and you return to bed. You’re just getting into that good sleep when another person knocks on the door. Then another and another. All night this continues. Then it happens again the next night. And the night after that.

This is the current problem plaguing the Hawaiian spinner dolphin, one of the smallest dolphin species, well-known for their airborne twisting jumps. The mainly nocturnal mammals spend their daylight hours resting near the shores of the Hawaiian Islands in shallow waters, but a growing number of tourists, tour companies, and increasing human interaction are impacting the health of the dolphin pods as well as individual dolphins. 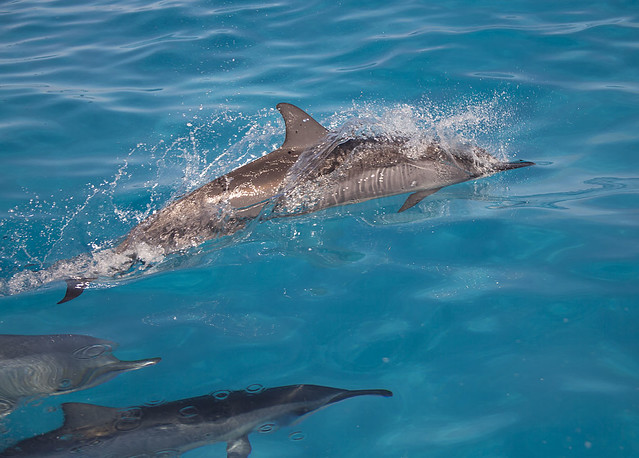 Photo by USFWS – Pacific Region, FlickrSpinner dolphins in Hawai’i's Papahanaumokuakea Marine National Monument. The proposed NOAA Fisheries rule would make it illegal for people to swim within 50 feet of the marine mammals in Hawai’i.

In August, National Oceanic and Atmospheric Administration (NOAA) Fisheries proposed a rule that would ban everyone from swimming with Hawaiian spinner dolphins. Under the rule, no one would be allowed get within 50 yards of spinner dolphins by any means. This includes by boat, kayak, paddleboard, swimming, and other type of transportation.

The proposed ban has proven controversial, even among those who agree that spinner dolphins need protections. Hawaii’s economy, of course, is sustained by tourism, and local operators are concerned the ban may negatively impact their business.

At four to seven feet long, Hawaiian spinner dolphins (Stenella longirostris) spend the night hours off Hawaiian shores in search of fish, shrimp, and squid. In the darkness, these mammals track their prey to depths of nearly 1,000 feet, communicate through echolocation, and work cooperatively to herd prey for the catch.

As sunrise arrives, the dolphins return to the shallow coasts to socialize, sleep, and nurse their young until late in the afternoon. Dolphins remain in motion when they sleep: For four to five hours every afternoon, the dolphins will swim slowly back and forth, coming up for air when necessary, while half of their brain sleeps, a unique adaptation for dolphins and whales that are required to control their own breathing at all times.

When a vessel or person approaches a pod, dolphins are interrupted from their sleep — they wake up completely to assess the threat. When this happens repeatedly — as it often does — the dolphins become exhausted, and have less energy for other activities, including responding to threats, hunting, or caring for their young.

According to studies cited in the NOAA Fisheries’ proposal, short term changes in spinner dolphin behavior due to human interference have already been documented in Hawai’i, including a decreased number of individuals sighted in typical resting places. While this is not definitive of a decreased population, it at least means the dolphins have moved from traditional resting grounds.

“Several studies have suggested that spinner dolphins exhibit behaviors outside of their normal resting behaviors in response to human interactions in Hawaii. Disturbed individuals incur an energetic cost,” said Ann Garrett, the assistant regional administrator of NOAA Fisheries. Interactions that cause such behavioral changes qualify as “harassment” of marine mammals under the MMPA.

Spinner dolphin pods can be found off the coasts of Kauai/Niihau, Hawaii (The Big Island), and Oahu and do not interbreed throughout Hawaii’s archipelago. Disturbance of one individual can also disturb the whole pod into relocating and interrupts nursing mothers.

“Long-term studies on dolphins in different parts of the world have documented negative impacts from intense viewing pressure, including population decline, habitat abandonment, and decreased reproductive success,” Garrett added. “The enhanced protections were proposed in response to both identifiable short-term changes in behavior and as a preventative measure,”she said, referring to the proposed 50-yard buffer zone.

Although not listed under the Endangered Species Act, the dolphins are already protected under the MMPA, which makes it illegal to harass, feed, hunt, capture, collect or kill any marine mammal or collect or possess any part of a marine mammal. Harassment includes any pursuit, torment, or annoyance that could injure or disturb marine mammals, including activities that disturb behavioral patterns.

The MMPA is currently implemented in Hawai’i by NOAA Fisheries Office of Law Enforcement, the US Coast Guard, and Hawaii’s Division of Conservation and Resources Enforcement. Maximum penalties for violation of the law include a civil fine of $27,500 or — for criminal penalties — one year in prison and/or a $100,000 fine. Enforcement of the law, however, has been spotty, and most people visiting Hawai’i are unaware of the restrictions.

NOAA Fisheries and partners have also established a certification program, Dolphin SMART, which businesses can join to show their support for the species. Dolphin SMART promotes dolphin conservation by minimizing harassment, and includes a 50-yard distance requirement. Operators wishing to become certified must attend training and participate in responsible advertising, among other criteria.

The proposed 50-yard NOAA rule would enhance and clarify these existing protections for spinner dolphins. Exceptions to the rule would include: people who inadvertently come within 50 yards of a dolphin, as long as they make efforts to move away; vessels that are approached by dolphins, as long as the vessel remains on its course; vessels that cannot safely keep a 50-yard distance when going to or from a port or harbor; and emergency situations when imminent or serious threat must be avoided.

Other alternative rules under consideration include a 100-yard restriction and closure of important daytime habitats to swimmers at certain times of day, including four bays on the Big Island and one on Maui. These measures are unlikely to be adopted at this time, but could be adopted in the future if the 50-yard limit does not provide enough protection.

Hearings for the proposal have drawn more than 300 people from four islands and NOAA Fisheries is still compiling the written comments it received.

Dolphin Discoveries has been in business for 25 years on the Big Island, running swim tours and writing local guidelines on sustainable dolphin swims. Co-owner of Dolphin Discoveries Kevin Merrill said, “Usually when we get in the water, we just float and the dolphins swim by. We know the dolphins are nocturnal and need to rest. Responsible operators cease at about 11:00 a.m.”

Merrill explained that legal issues and missteps created an excess of boating permits and an oversaturated tour market in Kona, a touristy area on west side of the Big Island. “Because of the way [the local government] issued permits, you have people trying to scratch out a living doing whatever they can. You’ve got all these knuckleheads that don’t understand what they’re doing with the dolphins, but they invested in a boat and have a permit.”

While conducting his tours, Merrill has encountered people driving through the pods at high speeds so that the dolphins will swim and jump at the bow. He’s seen overhand swimming and splashing tourists, which is seen as aggressive behavior by the dolphins. Tour boats sometimes drive into the middle of pods and have clients drop into the water almost on top of the dolphins. And, of course, some operators continue to conduct swims past the ideal 11:00 a.m. limit, preventing dolphins from sleeping. Voluntary guidelines have been established locally, but there is no law to enforce the guidelines or to penalize the offenders.

Merrill believes the dolphins need protection, but there are better alternatives that would protect both dolphins and local businesses. Instead of banning the entire practice of swimming with dolphins in Hawai’i, Merrill would rather see complete closures of critical habitats and time limits on swimming with dolphins made mandatory and enforced by NOAA. These restrictions would also be easier to patrol than a 50-yard limit, he said, especially considering that the dolphins, tides, and people are constantly in motion. The new rule could put local, responsible operations out of business. “We think there should be local solutions to local problems,” he said.

Merrill also pointed out that captive facilities would be exempt from this the 50-yard ban. As a result, the only way for people to have a close encounter with a dolphin would be in a small tank. There’s the possibility that this would increase demand for captive dolphins.

However, Garrett said the 50-yard rule would level the playing field among businesses. The pressure for close interactions with spinner dolphins would wane since no operators could legally provide them, she said, and tour operators would develop other alternatives, including wildlife tours that help customers spot the dolphins and other animals from a distance.

Mark Palmer, associate director of the International Marine Mammal Project, a project of Earth Island Institute, is a proponent of the ban. “While there is room for experimentation, in the end the needs of the dolphins are most important. We may well need to go for swimming closures in areas necessary for dolphin respite,” he said. “I also think the issue is bigger than just the official whale watching tour companies — individual tourists are a problem.” Because of that, he thinks that close supervision and enforcement by NOAA Fisheries will be required if the rule is passed, and that tourists will still need to be educated on why the dolphins should not be approached.

NOAA expects to make a decision on the proposed rule in late 2017.

Good Fire on the Klamath