Five years ago it wasn’t a question of if fracking would come to New York but when. Yesterday’s decision by Gov. Andrew Cuomo to ban high volume hydraulic fracturing in the state is a measure of how much things have changed in a relatively short period of time. New York is the first state, other than Vermont (which has little or no proven shale deposits) to ban the controversial drilling technique. New York’s decision is particularly striking given that it sits atop the mother of all gas reserves: the Marcellus Shale. In no uncertain terms the decision is a major setback for the oil and gas industry in North America. 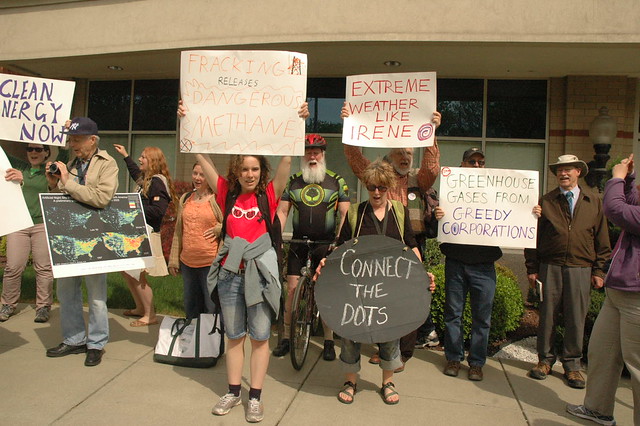 Photo courtesy 350.org Environmental activists now have an ambitious goal: they want to connect the dots and change the national dialogue on energy production and put an end to all types of fossil fuel consumption.

When I visited Wes Gillingham, the program director of Catskill Mountainkeeper, in 2009, hydraulic fracturing was still an insider’s game. As Gillingham told me earlier this week, when he tried to research the process six or seven years ago, nothing came up. The word wasn’t in circulation. And the only information available was from industry sources or geologists. In other words you had to know where to look.

Today the opposite is true. Fracking is everywhere. It’s been the subject of studio films, documentaries, and countless investigative news stories and even featured on an episode of the Simpsons. Since 2012, when Cuomo asked the New York Department of Health to conduct a review of fracking, the number of peer-reviewed studies on its environmental impacts has nearly quadrupled, Gillingham says. And the vast majority of those studies suggest that fracking poses a serious threat to human health and the environment. Indeed that was the primary argument put forward by state health commissioner Howard Zucker in presenting the findings of a long awaited report. Zucker summed it up this way: “Would I live in a community that allowed fracking? The answer is no.” (Numerous towns across New York had already come to the same conclusion passing moratoriums and restrictions on fracking.)

With the science and media attention public opinion has shifted too. A poll conducted earlier this year found that 79 percent of New Yorkers support a moratorium on fracking. Even so Cuomo’s decision was hardly a given. “My head is still spinning, because this is beyond anything we expected,” Kate Sindig, a senior attorney with the Natural Resources Defense Council in NY told Mother Jones.

The oil and gas industry never anticipated such an outcome either. It solicited studies on shale gas activism from private intelligence firms like Stratfor but never seemed to fully understand the dynamics taking place in rural America. Economic concerns are big, yes, but they’re not enough to blind people to the longer-term impacts of oil and gas development. Once the initial land rush passed and people had time to ask questions and gather information, the picture no longer seemed so simple, so black and white. It wasn’t just a matter of “clean energy” plus jobs (early on natural gas was touted as a clean alternative to oil and coal). It was much darker, and stories and reports coming out of Pennsylvania, Texas, and Wyoming proved that fracking could lead to profound environmental damage, property devaluation, and serious public health concerns.

That isn’t to say that towns weren’t divided. A story I reported for Earth Island Journal in 2010 on that very topic found that there were no simple answers. Whenever large sums of money are being thrown around along with promises of royalties and the assurance that nothing will change, that nothing will happen to your land — the only bit of equity you own — it’s pretty damn tempting to sign the lease.

Gillingham says when Catskill Mountainkeeper took up the issue in 2008, most people they approached, friend and foe alike, said that they had six months at most: The industry was coming — ExxonMobil had acquired a large chunk of land near the Delaware River in 2009 — and it was only a matter of time. After a year they proved that wrong and the campaign steadily gained momentum, effectively delaying any final decision and in the process upping the ante politically.

“Part of the staying power of the campaign is the fact that it’s actually working so people are seeing it as a success story,” Gillingham told me.

But even though fracking has been banned in New York the battle over pipelines, storage facilities, and oil by rail networks continues. According to Gillingham, there are multiple infrastructure projects in the works across New York State. For the last month activists in the Finger Lakes region have staged an ongoing protest at a proposed natural gas storage facility resulting in dozens of arrests. Crestwood Midstream, the company hoping to build the proposed site on the west bank of Seneca Lake, has said that its goal is to transform the Finger Lakes region into a “gas storage and transportation hub” for the Northeast.

New York may be spared the immediate impacts of fracking but, like the rest of us, it will live with the fallout for years to come. That is in part why Catskill Mountainkeeper and others have been laying the groundwork for a national campaign that brings together frontline groups battling everything from fracking and mountaintop removal to tar sands and uranium mining. Their goal is an ambitious one: to change the national dialogue on energy production and put an end to fossil fuel consumption. They’re calling themselves “the extreme energy collaboration,” to draw attention to the fact that the energy industry will go to extremes to get every last drop of oil out of the earth. They’re also hoping to build a movement like the one that prevailed in New York.

“We’re all fighting the same monster,” says Gillingham. “The true extremist in this story.”

Fracking was misspelled in the headline in an earlier version of this article. The error is regretted.